A Response to ‘Columbus, the West, and the Myth of the Noble Savage'

Jack Kerwick
|
Posted: Oct 11, 2017 12:01 AM
Share   Tweet
The opinions expressed by columnists are their own and do not necessarily represent the views of Townhall.com. 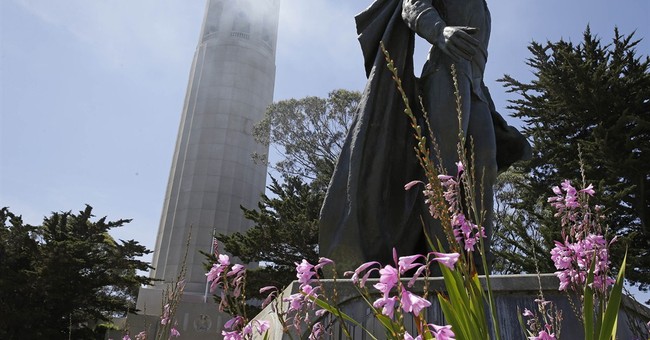 My most recent article, “Columbus, the West, and the Myth of the Noble Savage,” elicited a quite surprising response from a friend that took me off guard.

Although no one with whom I shared this article raised a single syllable’s worth of an objection to any of the facts that I stated, she proceeded to note that, though my thesis is true, it didn’t justify the virtual elimination of the “Native American” “as a people” from the Earth.

Needless to say, some counter-replies are desperately needed here.

(1)Logically and substantively, this response to my essay is the ultimate non sequitur: I never so much as hinted that the perennial warfare in which the indigenous peoples participated against each other justified any kind of ill treatment on the part of Europeans, much less the effective “genocide” mentioned in this criticism.  My thesis, which I will not restate but again, was entirely different in meaning, and there is no logically defensible way to get from it to the dastardly conclusion that genocide was morally permissible.

In fact, not that I should have needed to do so, but I explicitly stated that none of the facts to which I alluded were intended to either deny or justify any of the injustices suffered by the original inhabitants of what would become the Americas.

(2)Another claim that I made is that those who have long been referred to as Indians did not see themselves in the monolithic terms that we speak of them in today.  They comprised numerous tribes or “nations,” most of which were mutually antagonistic.  It is indeed telling that some tribes allied with Europeans in their battles against other tribes.

(3)To speak of the land that we now call the Americas as having originally belonged to the Indians is to speak anachronistically: It is to project onto the foreign peoples of yesteryear quite contemporary, incorrigibly Eurocentric categories that are simply not applicable.  It is to be guilty, in other words, of precisely that which the Columbus despisers insist is among European civilization’s gravest sins: Imperialism.

The conventional line that we (Europeans) took their (Indians’) land is the product of the colonizer’s, the imperialist’s brain.

This landmass that we call the Americas was sparsely populated.  Indians inhabited relatively little of it. The rest was wilderness.

And, again, they were no more “a people” than were the English and the Spaniards a single people.  The indigenous saw themselves as peoples, mostly enemy peoples of one another.

Furthermore, the concept of “a natural right to private property” is a European specialty. Did the Iroquois think that they were violating the private property rights of their enemies when they invaded the latter’s camps, abducted their women, laid waste to their homes, and scalped them alive?  I don’t mean to suggest that there isn’t some right to property rooted in natural law; rather, my point is that if there is an “inalienable” right to property, the Indians certainly didn’t give any indication that they were aware of it.

To be clear, a person no more manifests awareness of a right to private property in defending what he views as his or his tribe’s own than the gazelle manifests awareness of a right to life by attempting to flee the ravenous lion seeking to devour it.  The insistence that this territory belongs to me and/or mine emphatically does not translate into everyone has a natural right to property.

If indigenous peoples were conscious of a right to property, then they would have recognized the wrongness of raiding the goods of others.

By the way, isn’t the left forever assuring us that the idea of property rights is a culturally-specific, namely, a Eurocentric construct?

(4)Regarding this last point, not all Indians were forcefully moved from their lands.  Some most definitely were.  Yet there was much bartering and trading going on between Europeans and Indians as well.

While there was plenty of tragedy, there is no basis in fact for regarding the whole European encounter with Indians as one grave injustice, much less genocide.

(5) The idea that Europeans committed genocide against a whole race of people, nearly exterminating them from the planet, is as big a fiction as that of the Noble/Peaceful Savage.  In fact, the former depends upon the latter.  To repeat, Indian numbers were kept down not just by way of warfare with Europeans, but warfare with one another. Also, the bulk of casualties stemmed from diseases that indigenous peoples contracted from Europeans.

These points having been made, it is high time to put to rest once and for all the Big Anachronism at the very heart of the debate over Columbus:

Columbus did not discover America.  And he most certainly didn’t invade America.

There was no America before the Europeans, beginning with Columbus, began creating it.

America was named after another Italian (European) explorer: Amerigo Vespucci.

If monuments to Christopher Columbus need to be razed and the name of his holiday changed because of what he (supposedly) represents to the descendants of indigenous peoples, and if these perpetually aggrieved activists who make these demands had the courage to follow their logic through, then they would concede that the name of America itself needs to be changed because of what it must signify to these same peoples.

The Columbus despisers would recognize that the label of “Native American” is even more offensive than that of “Indian,” for it is inescapably Eurocentric, affirming, paradoxically, the legitimacy of the Europeans’ founding, the rightness of naming the continent(s) after the European Vespucci.

To see the self-defeating moral and historical idiocy here, we need only consider the following analogy.

Imagine if Jews had been the predominant population of Israel from the Biblical period straight through to, say, World War II.  Now, further imagine that Hitler invaded Israel, renamed it Hitler Land, and decimated many, but not all, of the indigenous (Jewish) peoples.  While we can imagine this scenario, we cannot imagine that these Jews (or their descendants) would eventually self-regard as “Native Hitlerians” and charge Hitler and his Nazis with having invaded…Hitler Land.

Here’s hoping that everyone had a very happy Columbus Day!