Jack Kerwick
|
Posted: Jan 28, 2017 9:30 AM
Share   Tweet
The opinions expressed by columnists are their own and do not necessarily represent the views of Townhall.com. 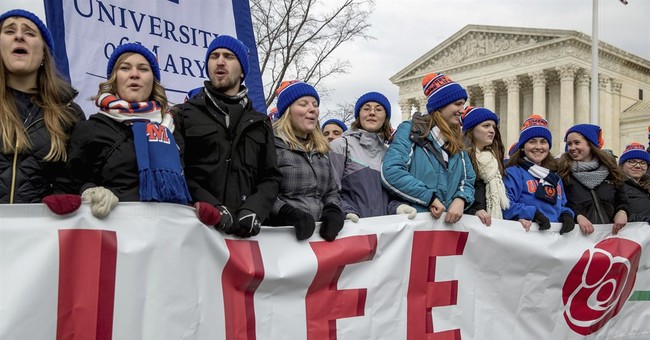 On Friday, January 27, 2017, masses of people converged on Washington, D.C. to repudiate Roe v. Wade, the 1973 Supreme Court decision that endowed upon American women a Constitutional “right” to “abortion.”

With respect to most of the issues of the day, I can understand and appreciate, even if I do not accept, the reasons that my opponents give for the erroneous positions that they hold.  The so-called issue of “abortion,” however, is decidedly not one of them.

There are few topics that are framed from the outset in so many deceptive terms as is the topic of “abortion.”  Even its name, the label that both its proponents and opponents use when addressing this issue, is designed to veil the hideous reality that occurs when women exercise this “right” that a handful of lawyers on the Supreme Court created for them 44 years ago.

For the purpose of convenience, I too will defer to common usage and refer to the topic under discussion as “abortion.” That being said, an honest discussion, to say nothing of decency, requires that we expose the euphemisms for what they are.

(1 )In any other context, whether war, capital punishment, a school shooting, or whatever, when one party kills, or threatens to kill, another, we never say of the one party that it aborted or threatened to abort the other.  Rival mobsters and gang-bangers don’t seek to abort one another.  President Trump didn’t pledge to abort the Islamic State from the face of the Earth. American and Nazi soldiers weren’t trying to abort each other.

In all of these instances, it is understood that it is the activity of killing that is the essential referent.

Now, some acts of killing are morally defensible.  The point, though, is that regardless of whether the killing in question is justifiable or not, no one thinks to describe it as an abortion unless and except for when it is a woman pursuing the death of her unborn child.

And this brings us to our next point.

(2)That abortion advocates must rely upon a host of impersonal terms to sustain their position is telling commentary.   The truth, though, is that no woman “chooses” to exercise her “right” to “terminate the pregnancy” or “the fetus” (notice the unwillingness on the part of proponents to even characterize the unborn as her pregnancy or her fetus).

The cold, hard reality is that abortion consists in a mother hiring a stranger to kill, by whichever means necessary, her child.

Let this sink in.  Those who support abortion maintain that it is morally permissible, perhaps even virtuous, that mothers resolve to have their children massacred.

That the child is in the womb and at an earlier stage of development than it would otherwise eventually reach is, both ontologically and morally, of zero relevance. The tiny human being growing in its mother’s womb differs from the reader of this essay similarly to the ways in which babies, toddlers, school children, and any other number of people differ from the reader of this essay.

In other words, it is meant, ludicrously, to suggest that, at the very least, the child in the womb is of a different species.  Yet even this is probably understatement, for many of those who are the most vocal, indeed, fanatical of animal and environmental rights activists would recoil in horror if animals were subjected to the savagery—the hacking into pieces—that is visited upon the unborn in abortion procedures.  Nor would they tolerate it if even plants were treated with the indifference with which the unborn are treated.

“Fetus” can have the hypnotic effect of luring people into thinking that the unborn do not belong to an organic species at all, that they are more on the order of masses of tissue, of things.

(3)Abortion is most definitely not an issue of a “woman’s choice over her own body.” For that matter, neither is it, strictly speaking, an issue about some abstraction called “life.” Rather, the question of abortion is nothing less than the question of whether we are going to affirm a world that encourages mothers to love and care for their children or one within which they feel entitled to kill them.

To reiterate, the relevant relationship here is not that of one rights-bearing individual to that of another.  And it is certainly not the relationship between a human person and a non-person.  Rather, the relationship on which the abortion issue hinges is that between a mother and her child.

Still, the mother/child relationship does not exist in a vacuum.  A society that permits abortion speaks volumes about itself.  In embracing the incoherent metaphysics of the childless pregnant woman (a pregnant woman with a “fetus,” a mother without any obligations to the child that grows within her womb); in recognizing in women a “right” to kill their unborn children, society as a whole determines how it as well views the relationship between the strong and the weakest of the weak, the powerful and the most powerless of the powerless, the present generation and the next.

To be sure, far from being a moral right, abortion is undoubtedly the gravest of evils, for it expresses society’s decision to treat its posterity, while their most vulnerable, as disposable.