Jack Kerwick
|
Posted: Dec 22, 2016 12:01 AM
Share   Tweet
The opinions expressed by columnists are their own and do not necessarily represent the views of Townhall.com. 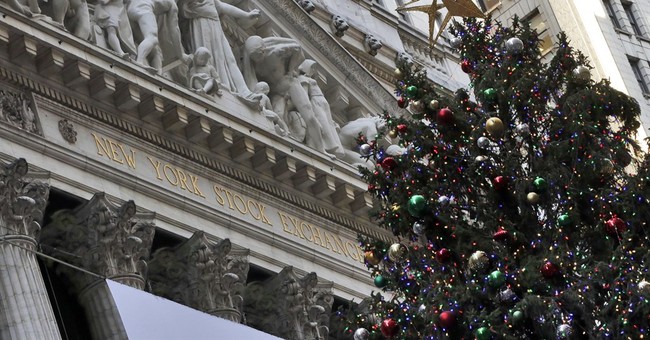 That there is some sense in which Christmas can be said to have become “secularized” over the years is undoubtedly true. Nevertheless, this judgment may be overwrought. Perhaps Christ is more present in “secularized” expressions of Christmas than either Christian or non-Christian is willing to acknowledge.

This is borne out by close examination of such “secular” Christmas cinematic classics as A Christmas Carol, It’s a Wonderful Life, and Miracle on 34th Street. None explicitly mentions Christ, but neither is it a coincidence that of the 365 days and multiple holidays from which Dickens could have chosen to make the backdrop of his tale, he chose this day and this holiday.

Ebenezer Scrooge is an old man who, in the early morning hours of the day that the Christian world reserves to celebrate the birth of God, discovers the reasons for the despair to which he long ago succumbed. Courtesy of his encounter with its “spirits,” Scrooge experiences the miracle of Christmas as he undergoes a radical conversion, a rebirth of the spirit reminiscent of that which Saul of Tarsus had to endure on the road to Damascus before he could become Paul, God’s ambassador to the Gentiles.

Those who lose their lives will save them, Jesus insisted. To achieve the supreme good, genuine, eternal happiness, one must die to oneself and be reborn in Christ. This death occurs when the heart, like an empty shell that has been dropped on concrete, shatters. Christians call this contrition. It’s what Scrooge suffered on Christmas Eve.

Recognizing his vices for what they were—selfishness, greed, pride, bitterness, mercilessness—Scrooge, with the help of some supernatural beings, slayed his old self. By dawn of Christmas morning, he was born again, a new creation committed to living a life of charity in the most Christian sense of this term. “Charity,” some may forget, derives from the Latin “caritas.” In Christian theology, caritas became synonymous with (the Greek) “agape,” the unconditional love for others.

By way of the miracle of Christmas, Scrooge transformed from near-spiritual death into a man consumed with a passion for loving others as he loves himself.

The protagonist of It’s A Wonderful Life is Jimmy Stewart’s George Bailey, a good, but frustrated, man. For all of his life, George has deferred pursuing his lofty dreams for the sake of fulfilling his duties, or what he took to be his duties, to his family, friends, and local community of Bedford Falls. On Christmas Eve, his frustration gives way to despondency as George—in covering for his absent-minded uncle who misplaced the family business’s proceeds long enough for the film’s villain, the Scrooge-like Mr. Potter, to steal it—finds himself facing prison time. But as he is about to hurl himself from a bridge into the cold running river below, an angel, Clarence, intercedes.

When George tells Clarence that the world would have been better had he never been born, Clarence decides to prove him wrong by revealing to George an alternate reality that is George Bailey-free. Through much pain, even horror, George discovers that the life that he just a short time earlier regretted was actually quite…wonderful.

George Bailey is a character to which average folks, Christians especially, can readily relate. He not only harms no one; George is good to others. Still, he has not yet crucified his old self. In fact, despite his modest circumstances—or is it because of these circumstances?—George isn’t just in the world. He obviously is very much of it.

He resents that he never left his hometown.

He resents the Bailey Savings and Loan Bank that his father built and that, from George’s perspective, has prevented him from achieving his dreams.

He resents that he doesn’t have as much in the way of material goods as some others.

In a particularly unguarded moment, George even expresses resentment that he has children, the family that he evidently views as but another hindrance to the life that he wanted for himself.

But through the miracle of Christmas, George, like Scrooge, has his sight restored. Scrooge was a bad man that became good. George was a good man who became a better man. Both, though, were surprised by joy, as C.S. Lewis memorably titled one of his books. Via the miracle of Christmas, both underwent a miraculous transformation when they discovered the secret to joyful living: gratitude.

Both George and Scrooge recognized existence generally and their personal lives specifically as given, i.e. as gifts for which to be thankful. Yet if thanks are due, then they must be owed to someone. In the instances of George Bailey and Ebenezer Scrooge, it’s clear that it is someone greater than themselves to whom their gratitude belongs.

And, to repeat, both came to this realization by way of supernatural assistance at Christmas.

Miracle on 34th Street too bears upon it the unmistakable impress of Christianity. For starters, as is abundantly clear by the title, this movie centers around what it portrays as a miracle of sorts. Secondly, the latter occurs at—when else?—Christmas.

An elderly man by the name of “Kris Kringle” arrives at the Macy’s Thanksgiving Day parade claiming to be the real Santa Claus (“Kris Kringle”, recall, derives from the German “Christkindl,” meaning “Christ Child.”). He is the embodiment of kindness and cheeriness. Kris is in the world, but not of it, for the world that he wishes to change is marked by a crass “commercialism,” as he describes it. This is a world (eerily similar to that in which we find ourselves) that exploits Christmas for the purposes of profit, status, greed. It is a world that has forgotten not just the true meaning of Christmas. It has abandoned altogether the quest for the True, the Good, and the Beautiful and, thus, the moral imagination necessary for their pursuit.

The world of Miracle assigns negative value to anything that can’t be readily reduced to an instrument for some immediately practical use or other.

The world that Kris enters is signified by Doris Walker (Maureen O’ Hara), her seven year-old daughter, Susan (Natalie Wood), and Macy’s psychiatrist, Dr. Granville Sawyer (Porter Hall). Doris, a single mother, is a decent but jaded woman who thinks that being “truthful” with her daughter means forbidding her from believing in “fairy tales, like Santa Claus.” Sawyer, in contrast, is the penultimate symbol of all against which Kris rails: mean, contemptible dishonest. The goodness exemplified by Kris and his young friend Alfred, a teenage employee of Macy’s who enjoys dressing up as Santa and distributing presents to children at the YMCA, Sawyer writes off as a function of mental illness.

As His contemporaries sought to remove the Prince of Peace from their world by nailing Him to a cross, so too does the world, represented by Sawyer, seek to remove Kris by way of a sort of social death: Sawyer attempts to have him institutionalized in a mental hospital.

Goodness, though, ultimately prevails. An idealistic lawyer, Fred Gailey (John Payne), quits the prestigious legal firm for which he works in order to prove to the world that Kris Kringle is Santa Claus. Just as Christ was considered “foolishness to the Gentiles,” as St. Paul puts it, Kris was considered the same by the self-appointed guardians of the world around him. But just as Christ radically subverted the epistemic hierarchy of the world, so too does Kris, via Fred, do the same.

Sawyer is disgraced and terminated. Doris begins to soften her heart and, along with Susan, begins to believe in Kris. She allows herself to love and be loved by Fred. The world is redeemed. Hope dawns anew.

And this miraculous chain of events occurs, not incidentally, during the season of Christmas.