Jack Kerwick
|
Posted: May 27, 2016 12:01 AM
Share   Tweet
The opinions expressed by columnists are their own and do not necessarily represent the views of Townhall.com. 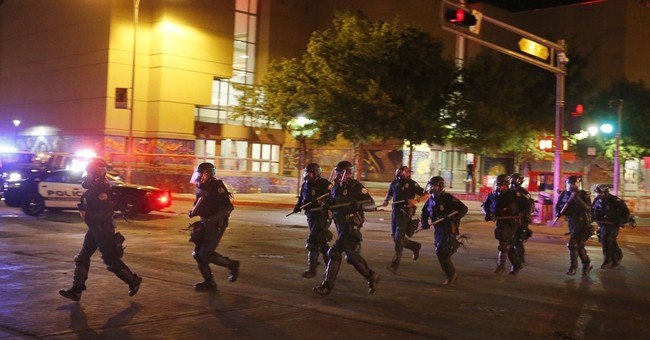 On the morning of May 25, I awoke to a message from a colleague with whom, in spite of our decided political differences, I’m friendly.

His question pertained to the riots—he referred to them as “protests”—engaged in by anti-Trump thugs—he called them “protesters”—outside of a Trump rally in Albuquerque, New Mexico the evening prior.

“If his [Trump’s] rhetoric wasn’t as controversial as it is,” my fellow professor asked, “if he said NONE of what has garnered his rise to the top—would these violent protests happen?”

Chris is a good guy. However, implicit in his question are assumptions that are as dubious as they are concerning.

(1) For starters, we should remind ourselves of what exactly it is that Trump has said that “has garnered his rise to the top” of the GOP presidential field.

(a) Given the legions of Mexican flags under the banner of which the rioters in Albuquerque (and elsewhere) have spread their reign of terror, it’s safe to say, I think, that Trump’s remarks regarding the criminal underclass that Mexico has exported to the United States and the need to deport those who are in America illegally is one piece of “rhetoric” that my colleague finds so “controversial.”

It’s undoubtedly true that on this score, Trump struck a chord with unprecedented numbers—millions and millions—of Americans from across the political spectrum. And given the displays of outrageous, indeed, the criminal, conduct of Mexicans assaulting police, destroying property, violating Americans’ right to peacefully assemble, and self-identifying as illegals, it’s just as undoubtedly true that Trump’s observations were spot on.

As for the deportation of illegals, from whichever country of origin, this is what the law requires—even if craven and greedy politicians refuse to enforce it.

Of course, Trump also promises to construct a wall along our southern border for which he’ll make Mexico pay. Yet unless one is for the erasure of a border between Mexico and the US, why should any American regard the proposal of a wall as any more “controversial” than the proposal for one to lock one’s doors at night?

And why should anyone whose allegiance is to America be the least upset by an arrangement that would ensure that a foreign government subsidizes an expensive mechanism that may not have existed but for its abuses?

(b) Trump has “suggested” for consideration a temporary ban on all Muslim immigrants. Considering that Islamic jihadists murdered nearly 3,000 Americans on a particularly infamous day some 15 years ago, and given that ever since America has had to contend with the most brutal of jihadists of various sorts from Islamic lands, this too has struck the ears of millions of Americans from diverse backgrounds—including Nation of Islam minister and black separatist, Louis Farakhan—as a commonsensical plan.

There are other “controversial” things that Trump has said, but I suspect that it is principally his comments on these immigration-related matters that my colleague has in mind when he uses the word “controversial” in connection with the violence of anti-Trump thugs. And this brings us to his next questionable presupposition.

(2) You can take it to the bank that if a person refers to another’s views as “controversial,” it is almost always going to be views with which he or she disagrees.

In other words, it is always the other guy (or gal) who speaks controversially.

As for the views of oneself and one’s ilk, not so much.

In reality, though, the word “controversy” should be reserved for reasonable disagreements, i.e. conflicts between informed individuals. That there is disagreement between, on the one hand, folks who insist that the moon landing of 1969 never happened and, on the other hand, the rest of us, most definitely does not mean that the event in question is “controversial.”

But setting this point aside, we need only acknowledge this much: Given that the presence of different political parties, religious denominations, ideologies, and so forth represent differences in viewpoints, virtually any such perspective is bound to sound “controversial” to those who don’t share it.

Bernie Sanders and Hillary Clinton’s plans to militarize society via their socialism is, at a minimum, “controversial” to roughly half of the country that plans on voting against them.

And yet there are zero reports of their “controversial” views provoking political opponents into attacking the property and person of others.

(3) My colleague seems to assume that mob violence against innocents is an understandable reply to “rhetoric.” To this I offer two responses.

First, as in the case of the “controversial,” it is always the other guy’s “rhetoric” that is “divisive,” “polarizing,” “incendiary”—i.e. provocative of bloodthirsty retaliation.

Had it been hordes of, say, white Southerners with Confederate flags who visited destruction down upon the heads of attendees at an Obama, Black Lives Matter, or even a Nikki Haley rally, you can bet dollars to donuts that my colleague never would’ve inquired into the connection between the “controversial” “rhetoric” of the latter and the “protest” of the former.

Second, the only time that violence is defensible is when it is defensive—when it is unavoidable in order to protect oneself or innocents. Decent parents teach their children this from a young age: “Sticks and stones may break my bones,” and all that.

As one lifelong martial artist and former New York City detective put it, for a civilian to use violence for any reason other than self-defense or the defense of a loved one from “imminent danger,” is for that civilian to be “part of the problem [.]”

(4) Finally, my colleague’s question assumes that those participating in these carnival-esque riots have a clue as to what it is they are against (or, for that matter, for). It’s far from clear this is the case.

Besides, does anyone really think that if not for Trump, those igniting fires, hurling obscenities, flashing the middle finger, destroying property, and clashing with police would be volunteering to help the sick or going to work?

Why Is Dr. Oz Running as a Republican?
Townhall
School asks parents if their kids have permission to eat lunch inside on the floor when it's too cold outside
Twitchy
Biden's Remarks in Kansas City Are a Complete Acid Bath
Redstate
Reps. Greene and Gohmert Finally Met the J6 Political Prisoners: What They Saw Isn't Pretty
PJ Media