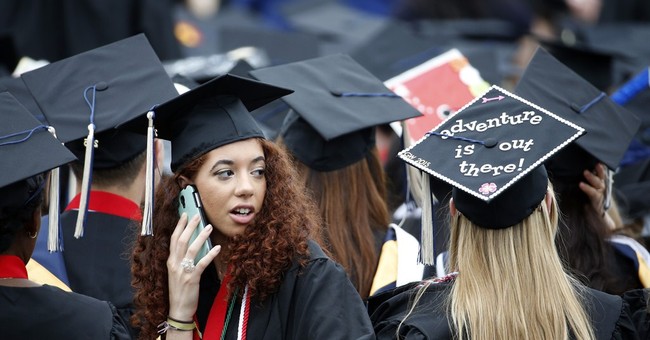 The statue, which commemorates the missionary efforts of Jesuit priest, Pierre-Jean De Smet, depicts the latter on an elevated platform holding a cross over the heads of two American Indians.

The school paper, The University News, featured an editorial by SLU student, Ryan McKinley. According to McKinley, the statue deserves to be removed from campus because it reflects “a history of colonialism, imperialism, racism and of Christian and white supremacy.”

Ironically, it’s a shame that this event gained national news coverage, for in doing so, the public risks receiving the impression that there is something unusual afoot at SLU. However, the tragic truth of the matter is that the anti-Western ideology—and, hence, the anti-white, anti-Christian, anti-American, anti-male ideology—underwriting the fuss over the De Smet statue is the conceptual lens of the whole academic world.

But it’s even worse than this: The ideology on display at SLU transcends academia, for it is the Zeitgeist of contemporary Western and American culture.

What all of this in turn means is that academics are guilty on three scores.

First, they stand convicted of preaching an ideology—any ideology—while they should have been teaching.

Secondly, in advancing the anti-Western ideology that is our culture’s dominant worldview, academics are guilty of promoting an especially pernicious ideology.

Thirdly—and this is the most egregious of the crimes for which they stand condemned—academics are guilty of promoting an ideology that is their culture’s dominant worldview, i.e. the status quo.

When Hannah Arendt observed the trials of Nazi war criminals, she claimed to have been struck by “the curious, but quite authentic, inability” on their part “to think.” It is this phenomenon, Arendt noted, and not any especially wicked motives, that accounted for the Holocaust. Neither Adolph Eichmann nor any of his partners in crime were inclined to think beyond their stock of conventional phrases and clichés. This inability or unwillingness to think critically is inseparable from, if it isn’t identical with, an inability or unwillingness to exercise self-rule or autonomy: the defendants were only interested in obeying others.

Of course, Arendt knew that there was nothing unique about the Nazis in this regard. Most people much of the time and all people some of the time succumb to the temptation to relinquish critical thought. After all, it is far easier to go along in order to get along. It requires no courage, no mental exertions, to conform to prevailing opinion, to “obey.”

Yet this inability to think, to obey The Majority, has given rise to the worst sorts of evils.

“Colonialism;” “imperialism;” “racism;” “white supremacy;” “Christian supremacy”—these are the soundbites, the talking points, the bumper sticker slogans, that define both the substance and the boundaries of the PC Zeitgeist. A Taoist scholar once wrote that every “ism” is a “wasm.” His point is that once a current of thought has been abstracted from its place in the complex of mental activities and frozen as a doctrine, an “ism,” it has been divested of the dynamic character, the nuances and open-endedness that originally made it a living belief. The dogma that replaces it is necessarily an oversimplification, a caricature.

It’s of no surprise that our student and faculty activists at SLU (and everywhere else) must think in terms of “isms.”

Yet, as I mentioned, students don’t start learning about the “isms” once they get to the university. Regrettably, the ideology that their professors reinforce in the college classroom is the same ideology on which their minds have been fed by the larger culture all of their lives.

From their first day in college, students are disposed to acquiesce in the ideology with which their professors will besiege them for the next four (or more) years. So, rather than inculcate in students those intellectual virtues—curiosity, daring, discernment, and excitement—necessary for challenging the prejudices that they’ve inherited from the larger society, faculty strengthen those prejudices.

In doing so, faculty strengthen their students’ “curious, but quite authentic inability to think.”

But in burdening them with this handicap, the self-same professors who ache to make their students into little saviors of the world actually frustrate the pursuit of their own goal, for, as Arendt observed, the inability or unwillingness to think—to cultivate individuality—all too often translates into the ability and willingness to aid and abet evil.

Edmund Burke famously said that the only thing that is necessary for evil to triumph is for good men to do nothing. He was right. However, there are plenty of reasonably decent people that may not be aware that evil is in their midst if they lack the ability, or the willingness, to genuinely, thoroughly, think about the ideas that “everyone” accepts as true.

As for those who dare to think, they don’t have their college professors to thank for it.