Living While an Infidel (LWI): Islamic-on-Christian Bloodshed in Kenya 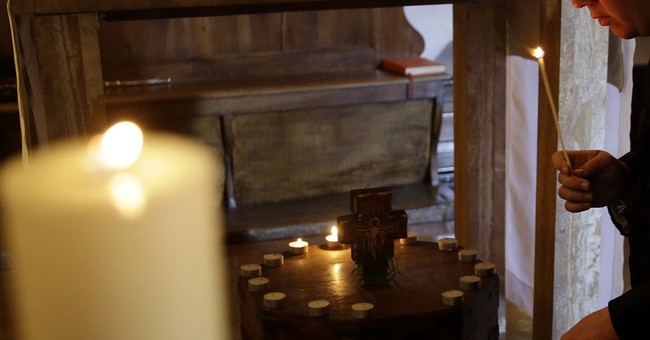 The mass murder of nearly 150 Kenyan Christian college students by Islamic predators is but the latest manifestation of a phenomenon that is now so common in places all around the world that we would be well served to give it a name.

I propose we call it, “Living While an Infidel” (LWI). The latter refers to the phenomenon of non-Muslims who invite death upon their heads for no other reason than that they are not Islamic.

On April 2, at around dawn, no more than ten Muslims besieged Garissa University. The latter is in a town—Garissa—with a large Somalian population that is located approximately 90 miles or so from the Somali border. The murderers were members of Shabab, an Islamic paramilitary outfit and Al Qaeda faction that justified the mass murder on the grounds that Garissa is actually Somalian territory, a “Muslim land under colony” courtesy of Kenya.

The Kenyan government, according to Shabab, used the university as the agent by which it sought to “spread its Christianity and infidelity.”

According to the New York Times, those students who managed to escape “described being awakened before dawn by the sound of gunfire and fleeing for their lives as masked attackers closed in.”

One Augustine Alanga, an economics major, said he had been asleep in his dormitory when the shooting began. He said he bolted from his room without stopping to put on his shoes, cutting his feet as he sprinted barefoot across the campus and into a nearby forest.” When Alanga finally rested, he claimed to have seen “’five or six’” masked men “‘shooting live rounds.’”

When it was all over, the carnage consisted of the bullet-perforated corpses of 147 young Christians.

For as horrific as this latest attack is—apparently, “the worst terrorist attack” in Kenya “since the 1998 bombing of the United States Embassy”—the ugly truth of the matter is that Islamic assaults against Christians in Kenya is hardly anything new.

The Times reports: “Kenya’s struggles with the Shabab have been going on for years. In late 2011, citing a string of attacks and kidnappings, the Kenyan military charged across the border into Somalia, sending troops, tanks and aircraft to fight the Shabab.” In other words, prior to this juncture, Islamic-on-Christian violence in Kenya became sufficiently intolerable to justify invading Somalia in order to uproot Shabab.

Yet, apparently, this did little to no good. From 2012 to the present, Shabab has murdered more than 600 Kenyans.

Westerners are continually reminding the more “benighted”—less Politically Correct—of their fellows that the Muslim butchers waging jihad against their non-Muslim neighbors also target other Muslims for destruction. This is true, but lest it be exploited to serve a PC agenda—as it invariably is—we should note that those Muslims who meet the same fate as that of their non-Islamic counterparts are often regarded on the order of “collateral damage.”

For example, Shabab not only separated Islamic from Christian students during its most recent foray into mass murder, it employed the same tactic back in 2013 when it preyed on innocents at a crowded shopping mall in Kenya. The Times: “During the shopping mall attack, gunmen separated Muslim from non-Muslim civilians by asking religious trivia questions,” questions regarding the names of “the Prophet’s mother” and his “first wife.” All 67 of the “‘non-believers’ were killed on the spot.”

Shabab further weakens the line, a favorite of the likes of President Obama, that the killers that fill its ranks aren’t really Islamic because they kill Muslims as well as non-Muslims, when it seeks to defend its actions by warning that “all Muslims must stay far away from the enemy and their installations so as not to become human shields for them [.]”

Lest this letter found by The Associated Press leave us with any doubts concerning the mercilessness of those who would murder innocents, Open Doors—an organization dedicated to serving persecuted Christians throughout the world—discloses some painful details of the aftermath of this bloodbath.

As relatives seek to identify the remains of their loved ones, the task proves to be daunting because of “the severity of the wounds the victims sustained and the poor preservation of the bodies because of the heat.” One father, upon searching for three days, still has not managed to find the body of his son. The boy’s uncle remarked: “I cannot find words. We are speechless. For now we just want to find his body. But looking through the bodies to find any mark that would identify him is almost too painful…this is torture.”

“May God help us find him,” the man added.

The point is that while Islamic jihadists are of many lands, they are of one mind and heart when it comes to infidels: the latter are to either convert to Islam or die.

However, truth be told, even this is only theoretical, for in practice, as the Garissa massacre among countless other instances of Islamic-on-Everyone and Anyone violence readily reveals, victims are given no choice: Judging from the escapades of Muhammad’s spiritual posterity, it would seem that being an unbeliever demands nothing less than capital punishment.

In other words, these poor Christians in Kenya, like Christians, Jews, and the non-Muslim prey of homicidal Islamic aggression everywhere, are guilty of nothing other than Living While an Infidel (LWI).