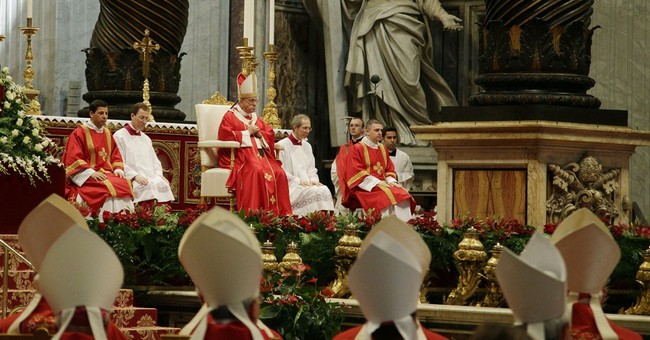 That Jesus commanded His disciples—of which I am one—to love “the poor” is beyond dispute. Equally beyond dispute, however, is that, regardless of what growing legions of left-leaning clerics would have us believe, Jesus never—never ever—addressed the issue of “inequality.”

The head of my church and the most visible religious leader on the world stage today, Pope Francis, is as guilty a culprit as is anyone on this score. The Pope made headlines on more than a few occasions since his tenure began when His Holiness condemned “inequality” generally, and the traditional American economic system in particular, with a bluntness that would have made Barack Hussein Obama blush.

Ours is “an economy of exclusion and inequality,” Pope Francis insisted. Our system of “inequality” both results from and encourages “laws of competition and the survival of the fittest, where the powerful feed upon the powerless.” Thus, “masses of people find themselves excluded and marginalized: without work, without possibilities, without any means of escape.”

Worse, the Pope informs us, our “capitalist” system with its “inequality” violates the divine injunction against “killing,” for “such an economy kills” (emphasis added).

Pope Francis may be the most well known Christian leader to conflate Jesus’ teachings on the proper treatment of the poor with the issue of income and wealth “inequalities.” But he speaks for countless lesser known representatives of Christianity.

Take Norma Cook Everist, a professor of church and ministry. In an article that she penned for The Lutheran, Everist insists that things haven’t changed a lick since Martin Luther said that “the poor” are routinely “defrauded” by “the rich.”

“Inequality,” Everist remarks, divides the world into “makers” and “takers” while fostering the godless fiction that some people, and even “some children,” are “worth more” than others, and that some, “the poor,” are of “‘of no worth’[.]”

The project of reducing the Gospel to an activist’s manual on addressing “inequality” is fraught with difficulties.

First, as already noted, it is simply dishonest: there is no basis, Biblical or otherwise, for equating an obligation to care for the poor with an obligation to endorse political policies ostensibly aimed at reducing “inequalities” in income and wealth. Decent minded people of all faiths and no faith have long recognized the need to care for those in poverty, and Christians specifically have always been acutely aware of this as a moral imperative.

But it hasn’t been until the emergence of large, centralized governments, immensely affluent, industrialized societies, and the dominance of secular, egalitarian ideologies—i.e. phenomena that don’t appear until relatively late in Christian history—that anyone, much less any Christian cleric, has thought to identify compassion for the poor with the amelioration of “inequalities.”

Second, even the tireless emphasis that pastors place upon Jesus’ relationship with “the poor” is less than fully honest, for it is grounded in a selective reading of the New Testament.

“The poor” is as ambiguous as it is emotionally-charged a term. Most of the people among whom Jesus spent His time were certainly not rich by the standards of their day, and some of them did indeed live in grinding poverty. While it’s true that there was no “middle class,” it’s equally true that just because the tax collectors, farmers, fishermen, carpenters and so forth with whom He appears to have fraternized were not rich, neither were they all impoverished.

That today’s clerics fail to make these discriminations between those to whom Jesus ministered by referring to them all as “the poor” reflects their awareness of the emotional and moral appeal of this moniker. After all, “the poor” are, well, poor: only the heartless could fail to feel for them. And “the poor” also lends those so designated moral authority, for being the victims of their circumstances, “the poor” are always blameless.

Third, this exclusive stress on Jesus’ fondness for “the poor,” whether by accident or design, conveys the impression that He was exclusively fond of “the poor,” a respecter of persons by virtue of their socio-economic condition—exactly what the Bible insists God is not.

This notion, in turn, further underscores a sense of moral superiority among “the poor” by fueling it with the fiction that their poverty is a saving grace. “The poor,” in other words, can too easily think that it is they, not “the rich,” that count for more in God’s eyes.

Some observers, like the 19th century philosopher, Friedrich Nietzsche, thought that this, in fact, was the whole purpose behind Christianity. In referring to it as a “slave morality,” Nietzsche’s point is that it serves, and was always meant to serve, the psychological and emotional interests of the poor masses, namely their interest in exacting a sort of imaginary vengeance against the wealthy by demonizing them while insisting upon their own “blessedness.”

Admittedly, Nietzsche was an enemy of Christianity. But he became an enemy after having been raised Christian by his Lutheran minister father. In any event, one needn’t accept Nietzsche’s reading of Christianity—I do not—in order to see that those Christian leaders who use their pulpits to blast “inequality” lend it considerable plausibility.

Finally, Jesus excoriated “the rich,” yes; but He was no less hard on “the poor,” including and particularly His closest followers. Conversely, sometimes Jesus lavished praise upon “the rich.”

For 2,000 years, whether rightly or wrongly, Christendom’s worst villain has been, not the rich and famous Herod, Pilate, or Nero, but Judas Iscariot, one of Jesus’ closest disciples and a “poor” man who relinquished what possessions he may have had in order to follow Him. Moreover, Jesus regularly castigated his “poor” disciples for their lack of faith, and, sometimes, compared them unfavorably with wealthy Gentiles, like the Roman Centurion whose servant Jesus healed.

Moreover, it is worth noting that besides Himself, the greatest example of Christian charity that Jesus extolled is that of the Good Samaritan, a rich man who deployed some of his ample resources to help a stranger in need.

We also shouldn’t forget that Nicodemus and Joseph of Arimathea were rich members of the priestly class with whom Jesus must’ve been particularly close, for not only did they attempt to prevail upon their fellow Pharisees to refrain from turning Jesus over to the Romans. Following Jesus’ crucifixion, both prepared His body for burial in the tomb that Joseph secured for Him.

All of this can be found easily enough in the four canonical Gospels which are read in Christian churches throughout the world every Sunday. That these points are neglected by so many ministers is due, I submit, to their obsession with combating, not poverty, but “inequalities” in income and wealth—a topic, this Christian has been at pains to show, having nothing to do with either the whole of the Bible or The New Testament.