Ivan Sascha Sheehan
|
Posted: Aug 07, 2020 12:00 AM
Share   Tweet
The opinions expressed by columnists are their own and do not necessarily represent the views of Townhall.com. 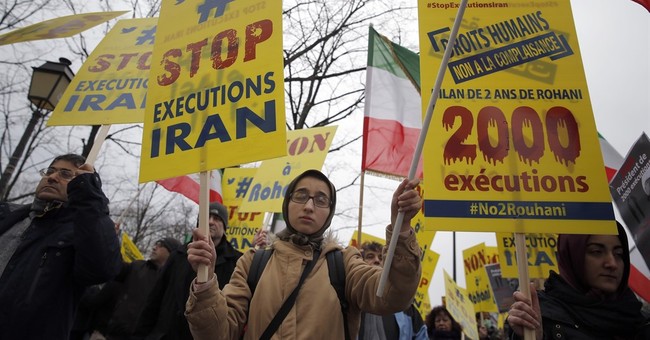 The Trump administration was right to adopt an assertive policy for dealing with the Islamic Republic of Iran. And it was correct to implement a strategy of “maximum pressure” following withdrawal from the 2015 nuclear deal that left a range of vital issues unaddressed. But confronting the problems posed by the Iranian regime in a meaningful way means not limiting them to a narrow few but rather identifying them for the world to see.

Whereas the Obama administration seemed content to pursue an accord on the nuclear issue while pushing aside concerns about Iran’s terrorism and regional meddling, the current White House has demanded an end to those activities and to the entire Iranian nuclear program. They have nevertheless not placed enough emphasis on the regime’s myriad human rights violations.

U.S. policy may have turned a corner on July 17 when State Department spokesperson Morgan Ortagus issued a statement focused exclusively on the “grave concern” of “persistent violations of human rights” by the Iranian judiciary. Ortagus indicated that “the United States calls on the international community to conduct independent investigations and to provide accountability and justice for the victims.”

The statement represented a sensible evolution of U.S. policy insofar as European allies are likely to have fewer objections to a U.S.-led “maximum pressure” campaign if it is focused, to a large degree, on universal principles shared among modern democracies.

The State Department was also correct to underscore Tehran’s unfortunate lack of accountability by pointing to specific incidents for which neither the regime nor any of its officials have faced justice. That Ortagus delivered her statement just two days before the anniversary of the creation of “death commissions” in the Islamic Republic was hardly lost on astute observers.

These tribunals were in operation between summer and autumn 1988 and involved interrogations of political prisoners over their views and affiliations before sentencing them, almost invariably, to death. As Ortagus noted, “The current head of Iranian judiciary and current Minister of Justice have both been identified as former members” of the death commissions that carried out the 1988 massacre.

Over the course of several months that year, an estimated 30,000 individuals, the majority of them activists from the main Iranian opposition movement, the People’s Mojahedin Organization of Iran (PMOI/MEK), were executed. Victims, including teenagers and pregnant women, were hanged in groups before being taken away in refrigerated trucks and buried, many in mass graves.

Today, as the regime works to destroy evidence from what some scholars believe ranks amongst the worst crimes against humanity since the end of World War II, a number of these graves have become construction sites. Human rights groups, including Amnesty International, and political organizations, such as the National Council of Resistance of Iran (NCRI), have called out the ongoing destruction of evidence in an effort to highlight the need for independent investigations of the atrocities before it is too late.

Following the State Department’s July 17 statement one can hope that U.S. officials will soon emphasize long-unresolved human rights issues in Iran. Focusing on human rights would not simply help ensure a united Western front, it would do so at a moment when Western powers have been regrettably misaligned on Iran and solidarity with the Iranian people is needed like never before.

With record numbers of Iranians participating in three nationwide uprisings against the theocratic system in just the past two and a half years, there has arguably never been a more a critical time to be united in confronting Tehran.

In January 2018, residents of more than 150 Iranian cities and towns joined together in chants of “death to the dictator” and “death to Rouhani” - references to the regime’s supreme leader and president. The simultaneous condemnations of the standard-bearers for two mainstream political factions was reinforced by additional chants which name-checked both “reformists” and “principlists,” informing them that “the game is over” and the Iranian people demand an end to the religious dictatorship that has ruled for more than 40 years.

The same chants re-emerged on a national scale in November 2019 when it became clear that the public recognized no credible effort to address their grievances on the part of either political faction. During this uprising, Iranian security forces killed an estimated 1,500 peaceful protesters. Even this did not stop protestors in more than a dozen provinces from once again pouring into the streets in January 2020 to demand regime change.

Now global powers must do their part by closing ranks behind the Iranian people in their quest for democracy.

While the U.S.-initiated “maximum pressure” campaign provides valuable support that exposes the regime’s repressive institutions, it is unlikely to evoke a demonstrable commitment to the Iranian people’s cause until it is better aligned with their actual grievances. This is not to say that Iranians are uninterested in the nuclear dispute or Tehran’s regional transgressions. Both are mentioned in the 10-point plan outlined by the leader of the Iranian opposition, Maryam Rajavi, the President-elect of the NCRI. But it is the NCRI’s broader platform – which includes a commitment to human rights, the rule of law, and free elections – that truly unites Iranians behind a single banner.

With State Department officials pivoting to a focus on the Islamic Republic’s egregious human rights record and the need for accountability, U.S. officials have an opportunity to open a new front in the “maximum pressure” campaign by emphasizing human rights and pushing for a U.N.-led investigation into the regime’s atrocities.

Doing so could unify Western powers and assure the Iranian people that their future can be brighter than their past.