Humberto Fontova
|
Posted: Apr 18, 2020 12:01 AM
Share   Tweet
The opinions expressed by columnists are their own and do not necessarily represent the views of Townhall.com. 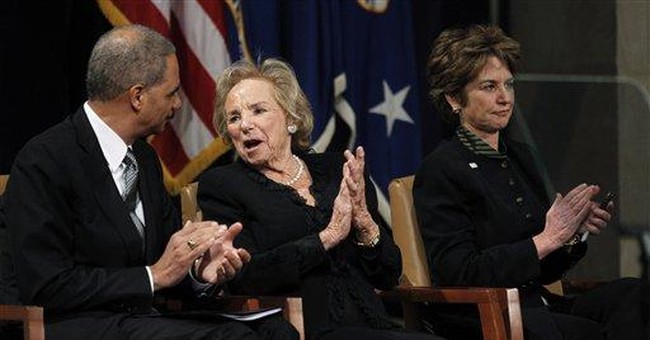 “Her (Ethel Kennedy’s) family says she’s been a fan of Guevara for years — and makes no apology about it. “My mom loves Che Guevara. Her dog is named Che,” her son, Robert Kennedy Jr., told The Post.” (NY Post 4/15.)

In fact, your humble servant was on this story before the Johnny-come-lately New York Post, right after alert columnist/blogger Sarah Gonzales on April 13th tweeted a picture of Mariah Cuomo and her grandmother Ethel Kennedy with a pic of Che Guevara peeping in the background.

“Why does Andrew Cuomo’s daughter have a framed photograph of communist murderer he Guevara in her living room?! If not her house, who is the Che worshipper of the family? Inquiring minds want to know.”

Your humble servant linked the tweet and posted to the effect that the home’s décor hinted at grandma Ethel’s place. She’s Robert F. Kennedy’s widow, hence JFK’s sister-in-law. This makes the Che Guevara family presence all the more “fascinating,” considering that these Kennedys were America’s twin “commanders-in-chief” during the Cuban Missile Crisis, and during the infamous Bay of Pigs treachery which took place 59 years ago this very week.

Another tip-off hinting at Che as grandma Ethel’s home decoration is this tribute to her on her 92d birthday from son RFK, Jr  in People magazine: “She combined skepticism towards orthodoxy, irreverence towards authority, she admired physical and moral courage and surrounded herself with war heroes, and dissidents both political and clerical…she tried to imbue us with a love for justice and an indignation when our country falls short of its ideals.”

Everyone even half-way familiar with Liberal-speak will immediately recognize that–given the historical record– the above personality traits are a sure bet that the affected liberal will worship a cowardly, sadistic, racist, war-mongering, mass-murdering imbecile, whose lifelong craving was to incinerate them.

And sure enough. Even more “fascinating” was yet another picture of Che Guevara detected by your humble servant at the famous Kennedy family estate named Hickory Hill in McLean, Virginia. According to Pinterest the picture of the terrorist mass-murderer whose lifelong craving was to nuke the U.S. was (is) located in the late Robert F. Kennedy’s very home office!

More “fascinating” still the Hickory Hill office pic is the original uncropped version. The famous Che Guevara pic seen on t-shirts and posters was a cropped version of one taken by Alberto Korda in March 1960. Korda’s real name was Alberto Díaz Gutiérrez and he was a KGB agent, as revealed by Soviet-Bloc intelligence defector Ion Pacepa. The cropped picture was spread throughout the world by I. Lavretsky and Giangicomo Fetrinelli, respectively full-time and part-time KGB agents, as also revealed by Pacepa.

Hence, every person you see sporting that t-shirt or poster is a genuine “Russian colluder!”-- though probably unwittingly in about 80 per cent of the cases, when they qualify merely as morons.

Several fascinating questions now arise: Was that Che pic present in RFK’s office in the early 1960’s, when he was head of the famous Operation Mongoose, purportedly a Kennedy/CIA plan to assassinate Fidel Castro and overthrow his regime? If so, there’s no indication the Che pic was used as a dartboard, as it sits alongside what are (presumably) revered Kennedy family members.

CNN (honored as the first western press agency graciously granted a Havana bureau back in 1997) is a particularly persistent publicist of these assassination attempts.

“Survivor Turns 90,” gushed CNN’s perky Patrick Oppmann from Havana back in 2016. “More people have tried to murder the world’s most famous socialist than any man alive, according to the 2006 British documentary “638 Ways to Kill Castro.”

Got it? CNN painted the poor old boy as a victim. And gosh? What in the world, CNN implies, would cause anyone to wish harm upon this inoffensive healthcare provider? After all, his only offense was to dispossess mobsters and provide free and fabulous healthcare and education to his formerly wretched and exploited countrymen.

This pretty much sums up the CNN story. The primary source for the British documentary — and for CNN’s report — by the way, is Fabian Escalante, one of Castro’s oldest and most trusted KGB-trained intelligence officers.

Regarding all those dastardly CIA assassination attempts against Castro so breathlessly reported by Escalante and eagerly transcribed by CNN’s intrepid gumshoes:

In the early ’60s, the late E. Howard Hunt was head of the political division of the CIA’s “Cuba Project.” “So far as I have been able to determine,” Hunt clarified in his book “Give Us This Day,” “no coherent plan was ever developed within the CIA to assassinate Castro, though it was the heart’s desire of many exile groups.” Interestingly, Hunt stressed that killing Castro was his own recommendation. But he couldn’t get any serious takers within the (notoriously and historically liberal) agency higher-ups.

This may have been because there were so many Castro supporters in the CIA at the time. Maybe it was hard to get their hearts and minds wholeheartedly into such a wrenching flip-flop. Consider these quotes from CIA officials:

“Everyone in the CIA and everyone at State was pro-Castro, except [Republican] ambassador Earl Smith.” (Robert Weicha, CIA operative in Santiago Cuba.)

Even the U.S. Senate’s liberal Church Committee, chaired by Sen. Frank Church in the 1970s, claimed that the assassination stories were largely mythologized:

‘In August 1975, Fidel Castro gave Senator George McGovern a list of 24 alleged attempts to assassinate him in which Castro claimed the CIA had been involved. … The Committee has found no evidence that the CIA was involved in the attempts on Castro’s life enumerated in the allegations that Castro gave to Senator McGovern.“

On the other hand, we have CNN’s Havana bureau earning its keep by transcribing reports of those nefarious CIA assassination plots, as reported to them by Fabian Escalante — one of Castro’s oldest and most trusted KGB-trained intelligence officers.

There was a day when Americans laughed at any U.S. network that regarded on-duty communist intelligence officers as trustworthy news sources.

Now, if the man (Robert F. Kennedy) tasked with overthrowing the Castro regime kept a cherished picture of Che Guevara in his home office, are there any more questions why Fidel Castro died peacefully in bed at 90?