Papa Hemingway in Cuba—“First Hollywood Movie shot in Cuba since 1959.”

Humberto Fontova
|
Posted: Apr 29, 2016 11:50 AM
Share   Tweet
The opinions expressed by columnists are their own and do not necessarily represent the views of Townhall.com. 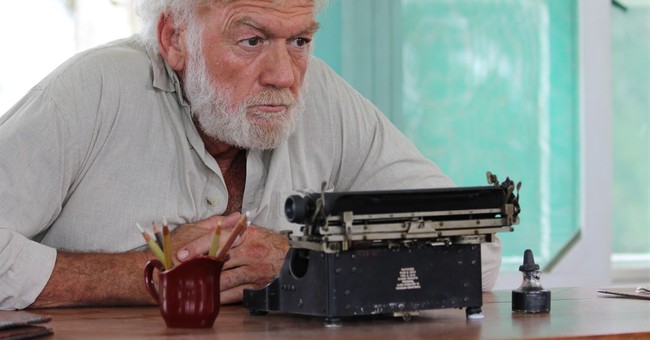 To flesh out this column’s title a bit: a KGB-founded and mentored totalitarian regime whose founder boasted, “propaganda is the vital heart of our struggle,” who the CIA pegs with “creating the most effective propaganda empire in the Western Hemisphere,” whose KGB- mentored secret police meticulously vet every single visa applicant—especially journalists, academics and filmmakers – this very regime SOMEHOW permitted a Hollywood production co. on its sovereign soil!

Well — astoundingly enough -- to make a movie glorifying a former KGB agent! In 1960 the movie’s main character, this former KGB agent, also wrote: “Castro’s revolution is very pure and beautiful. I'm encouraged by it. The Cuban people now have a decent chance for the first time.’

…Caught your breath back?

After collecting their wits, catching their breath, wiping off their slobber of joy, and brainstorming over any conceivable factors that might have contributed to this immensely puzzling development – to this great generosity by the Castro regime, the media finally hit upon an answer. It’s all due to the Castro regime’s “mellowing” owing exclusively to President Obama’s “engagement!”

“That the movie was made at all during the economic embargo was a feat of diplomacy, financial and otherwise,” gushes the New York Times.

Never mind that – as we’ve often discussed hereabouts — Obama’s loopholing of one of the most phenomenally successful foreign policy ventures in recent U.S. history (the Cuba “embargo”) has actually yielded the most relentlessly humiliating debacle in recent U.S. diplomatic history.

The story (I hear) centers on a friendship between a Miami–based newspaper reporter who visits and “hangs” with his hero Hemingway during “Papa’s” last few years living in Cuba. But none of that matters today, amigos. We’re here to bury the work of diplomacy — not to praise it.

As it turned out, in the actual mechanics of operating as a KGB spy “Papa” proved a hideous flop. But hey! It’s the thought that counts! That Ernest Hemingway eagerly sought to serve the most murderous organization in modern history (Stalin and Beria’s Secret police during the waning hours of The Great Terror) — this remarkable volunteerism would certainly seem to merit recognition -- especially from places like Hollywood and the New York Times.

Alas, not only does the movie omit (from what I hear) any mention of Hemingway’s services for the KGB as agent Argo, but it also omits what could have provided the movie with some of its most dramatic scenes. I refer to Papa Hemingway as honored guest and charmed spectator during many of Che Guevara’s firing squad murder marathons, while gulping his especially- made-for-the-celebratory-occasion Daiquiris.

Hemingway knew full well what was going on behind the scenes of Castro and Che’s “pure and beautiful” revolution. Accounts of "Papa” Hemingway’s eager presence at many of the Katyn-like massacres of untried Cubans comes courtesy of Hemingway's own friend, the late George Plimpton (not exactly an “embittered right-wing Cuban exile”) who worked as editor of the Paris Review, (not exactly a "Mc Carthyite scandal sheet.")

In 1958 George Plimpton interviewed Hemingway in Cuba for one of the Paris Review’s most famous pieces. They became friends and the following year Hemingway again invited Plimpton down to his Finca Vigia just outside Havana. An editor at The Paris Review during the 1990’s, while relating how this high-brow publication passed on serializing the manuscript that became Che Guevara’s Motorcycle Diaries, reveals “Papa’s” unwitting role in the rejection.

And so it started. Within a few years 16,000 men and boys (some of them U.S. citizens) would fill mass graves after scenes like the ones that so charmed Papa Hemingway with his thermos of specially-prepared Daiquiris. The figure for the Castroite murder tally is not difficult to find. Simply open "The Black Book of Communism," written by French scholars and published in English by Harvard University Press (neither exactly an outpost of “embittered right-wing Cuban exiles!”)

"The facts and figures are irrefutable. No one will any longer be able to claim ignorance or uncertainty about the criminal nature of Communism," wrote the New York Times (no less!) about "The Black Book of Communism."

Some Cuban women also figure into the Castroite murder tally. On Christmas Eve 1961, for instance, a young Cuban woman named Juana Diaz Figueroa spat in the face of the executioners who were binding and gagging her. They'd found her guilty of feeding and hiding "bandits" (Che Guevara’s term for Cuban rednecks who took up arms to fight his theft of their land to create Stalinist kolkhozes.) When the blast from that firing squad demolished her face and torso Juana was six months pregnant.