Humberto Fontova
|
Posted: Mar 19, 2016 12:01 AM
Share   Tweet
The opinions expressed by columnists are their own and do not necessarily represent the views of Townhall.com. 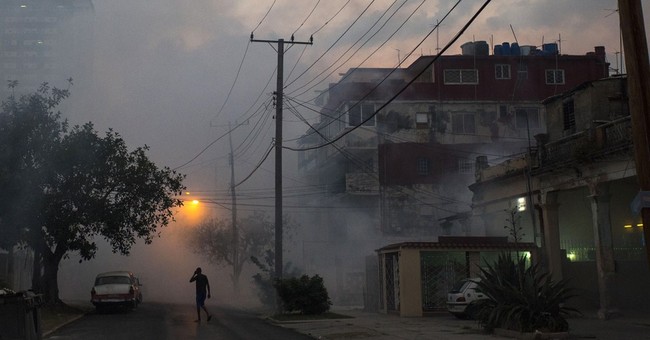 Let this be a lesson to all the naysayers who claimed Obama’s “engagement” or rapprochement with the Castro-Family-Crime-Syndicate (euphemized as “Cuba” by the media and State Dept.) was pointless and idiotic —who claimed that the Castros would not budge from any of their policies.

Your humble and hard-working servant himself must now eat crow. Exactly a year ago he went on John Stossell’s FoxBusiness show to hysterically berate Stossell and a CATO Institute scholar. These dogmatic libertarians claimed Obama’s policy was very wise and sound—and would shrewdly and magically beget modifications in the Castro regime’s modus-operandi.

OK, so there’s nothing in the actual 57 year history of the Castro regime to support such claims. Nonetheless, such miracles --they calmly explained-- are forecast in the holy texts of all their economic gurus, who shame both Nostradamus and Maharishi Mahesh Yogi in their transcendental wisdom and clairvoyance.

Well it turns out that the Castro regime has indeed modified some of its more recent policies.  Over the past year, for instance:

*Cubans are suffering a wave of terror –involving everything from thousands, upon thousands of arbitrary arrests by KGB-trained secret police to machete attacks by regime-paid mobs against peaceful women dissidents—surpassing anything seen in decades.

*Cubans are risking their lives to flee Cuba at a rate unseen for decades.

*The teenzy-tiny number of Cubans who Cuba’s Stalinist rulers graciously tolerated as self-employed in such lucrative fields as shoe-shine boys, street mimes and corner fruit and vegetable peddlers, etc. has declined drastically.

“Who cares?!” Some readers retort. “Obama is President of the U.S.—not Cuba! And anyway, those Latin-American banana republics are always hopelessly screwed up. Their people are always trying to sneak into the U.S. !”

In fact, prior to Castro-- when all Cubans were perfectly free to emigrate with all family, and property and U.S. visas were issued to them for the asking, and flights and ferries ran daily from Cuba to Florida—during this entire period slightly more Americans lived in Cuba than did Cubans in the U.S. In 1953, for instance, more Cubans vacationed (then voluntarily went home) from the U.S. than Americans vacationed in Cuba. Alas, none of this features in The Godfather II. So it’s mostly unknown.

*Sales of U.S. agricultural products to Cuba (legal since 2001 to the deadbeat Castros—but only for cash-on-the-barrel) have dive-bombed to a 15 year low. In 2015 they plummeted by nearly 40%.

Not a penny of the $7 billion Castro stole at gunpoint from Americans (while torturing and murdering a few Americans who resisted) has been compensated—or even acknowledged.

Everything above was fully documented in Congressional testimony just this week.

Adding insult to Castro’s injury of the U.S., some of the FBI’s most wanted terrorists and cop-killers continue living in his fiefdom as celebrities. These fugitives from U.S. justice murdered a total 17 police officers, five American civilians, two servicemen and planned 159 bombings in the U.S.(Perhaps Obama can visit them next week?)

“No—he will voluntarily come to me.” In this quote from September 1945 Gen. Douglas Mc Arthur was responding to his aides who were demanding that the conqueror of Japan make himself clear and finally demand a meeting with the Emperor of Japan.

Mc Arthur, as usual, was proven correct. He perfectly plumbed the nuances of etiquette between conqueror and conquered. Emperor Hirohito, bowing and hat in hand, visited him on September 27, 1945, accepting full responsibility for the war and expecting to be tried as a war criminal.

“General” (a laughably bogus official title as recognized by anyone familiar with Cuban history) Raul Castro shares exactly zero traits with General Douglas Mc Arthur. But given the lunacy and perversion that passes for current U.S. foreign policy, next week Raul Castro will be acting much as Mc Arthur did on September 27, 1945--as a gracious conqueror over an abject and groveling foe.