Humberto Fontova
|
Posted: Mar 25, 2016 2:30 PM
Share   Tweet
The opinions expressed by columnists are their own and do not necessarily represent the views of Townhall.com. 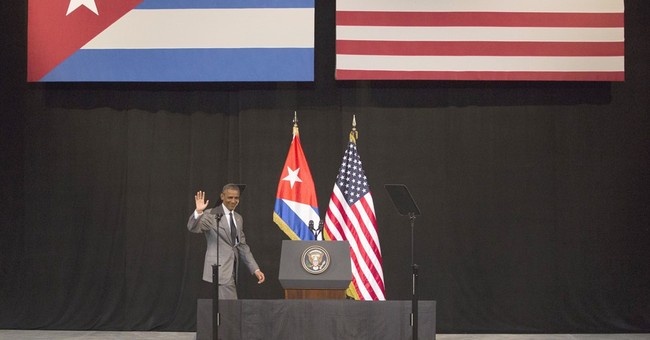 “Here’s my message to the Cuban government and the Cuban people: The ideals that are the starting point for every revolution, America’s revolution, Cuba’s revolution, the liberation movements around the world, these ideals find their truest expression, I believe, in democracy.” (President Obama, Havana Cuba, March 22, 2016)

In fact, from the mid-fifties on, both Obama’s recent host (Raul Castro) and his recent mural idol (Che Guevara) were Soviet agents committed to creating a Stalinist Cuba—a vassal to the Communist motherland.

Oh, I know…I know, the media, your professors, The History Channel, Francis Ford Coppola, etc. etc. all claim the Cuban revolutionaries were noble “nationalists” who were pushed –kicking and screaming-- into the arms of Mother Russia by blockheaded Yankee “bullying.”

Pure and perfect baloney—like practically everything that the above sources claim about the Cuban Revolution.

In fact, the leaders of the Cuban “liberation movement” (as Obama calls it) were Soviet vassals from the get-go. Starting in the mid- fifties both were proudly and faithfully working for the Soviet Union. On a visit behind the iron Curtain in 1953 Raul Castro met and was assigned a KGB case-officer named Nikolai Leonov. Then in 1955 while exiled in Mexico City Raul Castro introduced Leonov to his new Argentinean friend Ernesto “Che” Guevara.

Probably no Bobby-Soxer ever swooned at Frank Sinatra like Guevara swooned that day. Probably no Beatle-maniac gaped, giggled and screamed at Paul Mc Cartney like the smitten Guevara when introduced to a “gen-you-wine!” Stalinist apparatchik! You see, amigos, even at that tender age Ernesto Guevara was already boasting that in his view, “the solution to the world’s problems lie behind the Iron Curtain” and signing his correspondence as “Stalin II.” Yes, it was love at first sight.

Oh, I know, I know: in the movie Motorcycle Diaries Robert Redford depicts Ernesto Guevara as an idealistic youth anguished over the plight of the poor and yearning to alleviate it—a Peace Corps volunteer by another name. In fact, from his political infancy forward, Guevara was always a hard-core Stalinist. So yes, both Raul Castro and Ernest “Che” Guevara functioned as wind-up toys for a Spanish-speaking KGB agent named Nikolai Leonov.

Raul and Che had barely entered Havana in January 1959 when more of their Soviet chums showed up to eagerly offer some “hands-on” advice—which was eagerly accepted and implemented.

A highly effective Stalinist policy titled El Compromiso Sangriento (The Blood Covenant) was presented to Raul and Che only weeks after they entered Havana in January 1959 by a Soviet a GRU agent named Angel Ciutat. The scene was a meeting at Che's palatial (and recently stolen) estate just west of Havana…..

Oh, I know, I know the sources already mentioned say Che Guevara was antiseptically selfless, living a life to shame a trappist monk. In fact: “Che Guevara’s Havana mansion was among the most luxurious homes in Cuba," wrote Cuban journalist Antonio Llano Montes in 1960. “The mansion had a boat dock, a huge swimming pool, seven bathrooms, a sauna, a massage salon and several television sets,” continues Llano Montes. “One TV had been specially designed in the U.S. and had a screen ten feet wide and was operated by remote control (remember, this was 1959.) This was thought to be the only TV of its kind in Latin America. The mansion’s garden had a veritable jungle of imported plants, a pool with waterfall, ponds filled with exotic tropical fish and several bird houses filled with parrots and other exotic birds.”

But back to the Blood Covenant. Every candidate for military officer, suggested Soviet officer Ciutat, would take his place in a firing squad and pull the trigger with live ammo. Given the hundreds of Cubans being murdered weekly by firing squad in Cuba at the time, it seemed like a dandy idea.

From his prison-cell window the late Tito Rodriguez Oltmans, a former Cuban freedom-fighter and political prisoner, watched this blood covenant in action. "Every evening the military cadets and regime officials would be bused in and armed with Belgian .308 caliber FALs as they lined up for the firing squad," recalls Mr. Oltmans, a prisoner in La Cabana prison in the early 1960s. “As darkness fell the condemned patriot -- shirtless and gagged -- would be dragged to the execution wall and bound. The cadets and officials would line up only four meters in front of the patriot and all had loaded weapons." ... FUEGO!

A brief aside: historically and almost universally, many members of a firing squad shoot blanks, to assuage their conscience. But such assuaging would contradict the Cuban firing squads' most vital purpose.

The point of the Blood Covenant was to bond the murderers, especially those in line for future leadership, with the murderous regime. The more shooters, the more murderers. The more murderers thus manufactured the more people highly-motivated to resist any overthrow of their system. After 16,000 firing-squad murders (according to the Black Book of Communism) Cuba's officer and regime official corps was plenty "bonded" to the regime.

Most of Cuba’s economic infrastructure –especially tourism facilities—are owned by Cuba’s military. Hence every penny spent in Cuba by foreign investors and tourists lands in their pockets. Every shred of observable evidence proves that travel to Cuba and business with its Stalinist mafia enriches and entrenches these KGB-trained and heavily-armed owners of Cuba’s tourism industry. They’re the only outfit in Cuba with guns and they remain the most highly motivated guardians of Cuba’s Stalinist and Terror-Sponsoring status-quo.