“Who’s Going to Watch a Debate Between the Two Cuban guys?” (Asks Chris Matthews on Hardball)

Humberto Fontova
|
Posted: Jan 30, 2016 12:01 AM
Share   Tweet
The opinions expressed by columnists are their own and do not necessarily represent the views of Townhall.com. 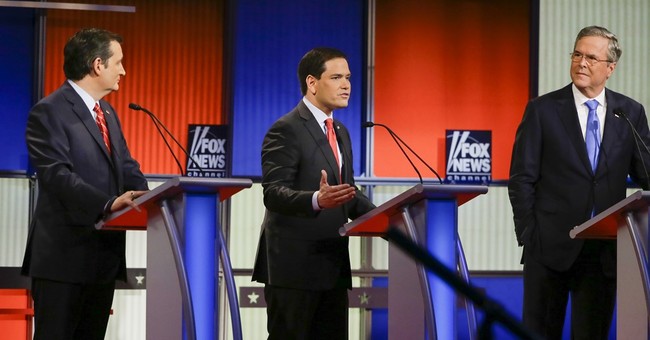 About 12.5 million people tuned in, as it turns out. But that’s not the issue here. Instead let’s play a fun game:

Can you imagine the hysteria from America’s usual arbiters of political correctness? We’d never hear the end of it!  The caterwauling would be deafening, especially from the likes of MSNBC, their hosts and their viewers.

It’s an old story, actually. As recently as a decade ago Americans of Cuban heritage were the most overwhelmingly Republican ethnic group in the U.S. Even with the third generation registering to vote, a measly 13 per cent of these incurably obtuse and unenlightened “Hispanics” registered with America’s majority political party. This was the most diminutive Democratic registration of any ethnic group in the U.S.

Worse still, 72% of these insufferable people were registered with America’s minority party (Republican.) This was the highest for any ethnic group in the U.S.

Yet these insufferable Cuban-Americans simply refuse to see the light–simply will not politically assimilate. Not all the Kings Horses or all the King’s Men can bring them around to follow the lead of the majority in their adopted country and register Democratic.

During candidate Obama’s campaign visit to Miami back during the summer of 2008, a huge crowd clapped deliriously at the Democratic Messiah–while outside the convention Hall, Cuban-Americans marched and waved picket signs denouncing him. This was the first instance of such irreverence towards The One during the campaign.

To add insult to injury, a formal letter drafted by five major Cuban-American organizations at the time, including the Bay of Pigs Veterans Association and Cuban Political Prisoners Association called Obama’s candidacy “an affront” to their very sensibilities! Nothing remotely of this sort had been mounted by properly-assimilated Americans on any campaign stop by the Democratic candidate.

Even more infuriating for the Democrat-Media Complex, the 2000 census showed that second-generation Cuban-Americans have educational and income levels higher–not only than mot ethnic groups who dutifully punch the clock at the Democratic sweat shop every morning–but also higher than the U.S. population in general.

This political and cultural recalcitrance has often goaded the Democratic/Media axis to enraged sputterings against Cuban-Americans.

During their Convention in 2004, America’s majority political party feted Michael Moore as their honored guest, seating him in a place of honor right next to Jimmy Carter. “Cuban-Americans,” wrote this honored guest for America’s majority party in his book “Downsize This,” “are responsible for sleaze and influence-peddling in American politics. In every incident of national torment that has deflated our country for the past three decades, Cuban exiles are always present and involved.”

All this takes talent, amigos. Around our domino tables we snicker derisively at those bumbling Trilateralists. Between sips of our mojitos, we guffaw and slap our thighs at the incompetence of the Bilderbergers and Rothschilds. We Cuban-Americans are the Illuminati to beat all Illuminati, the slickest of the slick. We watch “Godfather II” and snort scornfully. That was a chump operation Mikey Corleone pulled on Nevada Senator Geary with that dead prostitute. We woulda had him in our pocket for half the trouble.

We watch “Mr. Smith Goes to Washington” and direct our boos and hisses at Jimmy Stewart. What a fuddy-duddy.

We managed to get Bill Buckley and Gore Vidal, Chris Dodd and Larry Craig, The Brookings Institution and the Cato Institute, the Wall Street Journal and The Nation, the U.S. Communist Party and the U.S. Chamber of Commerce all on the same side of an issue. At various times all of the above came out publicly against the so-called Cuban embargo. All blamed it on the “politically powerful” and “well-heeled” Cuban-American lobby.

In fact, few U.S. foreign policy measures in recent history have been as phenomenally successful as our limited sanctions against the Stalinist Robber-Barons and chronic deadbeats who run Cuba. First off, for three decades the Soviet Union was forced to pump the equivalent of almost ten Marshall Plans into Cuba. T

This cannot have helped the Soviet Union’s precarious solvency or lengthened her life span. Secondly, the U.S. taxpayer has been spared the fleecing visited upon practically every taxpayer of those nations that eschew “embargoing” Cuba. To wit:

The U.S. has transacted almost $5 BILLION in trade with Cuba over the past 15 years. Up until three years ago the U.S. served as Stalinist Cuba’s biggest food supplier and fifth biggest import partner. We’ve fallen a few notches recently but we’re still in the top half. Nowadays the so- called U.S. embargo mostly stipulates that the Castro regime pay cash up front through a third– party bank for all U.S. medical and agricultural products; no Ex-Im (U.S. taxpayer) financing of such sales. Enacted by the Bush team in 2001 this cash-up-front policy has kept the U.S. taxpayer among the few spared fleecing by the Castro family. Per-capita-wise, Cuba qualifies as the world’s biggest deadbeat, with an uninterrupted record of defaults.

So U.S. taxpayers, if it’s true that “political pressure” by a “powerful” and sinister cabal of Cuban-American Republican string-pullers maintain the so-called embargo—then, well…you are quite welcome! Glad we could help!
'Inflation is Worse Than We Thought' and 'A Threat to Society'
Katie Pavlich
Nikki Haley Reminds VA Voters: 'Up to Us to Remind Them Parents Have the Final Say in Child’s Education'
Rebecca Downs
Poll Conducted for Democratic PAC Shows Absolutely Devastating Results for Senate Democrats