In ABC Interview, Elian Gonzalez Thanks his Clintonite Kidnappers and Communist Brainwashers 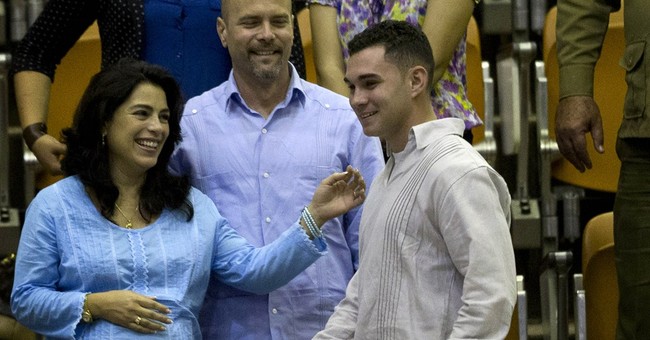 The “interview,” by the way, was conducted from Cuba after Avila was (gleefully) granted a journalist visa by the Stalinist authorities—not that this could possibly influence the nature of Avila’s questions. And certainly not that most viewers of the alphabet media would notice anyway.

"I am his (Fidel Castro’s) friend but above all I consider him (Fidel Castro) my father, my grandfather. Fidel, he is an incredible person! I came to know Fidel. I began to see his kindness!” These were among the eye-opening scoops the hard-hitting Jim Avila was able to coax from Elian Gonzalez.

Forget the crumbling buildings and trashy streets of Havana nowadays, amigos. All those who’ve experienced it know that the true horror of Communism is -- not what it does to a nation's infrastructure--but what it does to the mind, soul and spirit of its subjects.

That love, by the way, was displayed when (then) Deputy Attorney General Eric Holder concocted the “legal” cover for heavily-armed Federal troopers to mace, kick and gun-butt their way into Lazaro Gonzalez’ Miami home on the morning of April 22, 1980, wrench a bawling 6 year old Elian from his family at machine-gun point, and bundle him off to a Stalinist nation.

The Federal troopers left 102 people injured some seriously. Many of the injured were ladies who had brandished dangerous weapons. Worse, they had displayed these weapons openly, threateningly. These weapons were rosaries.

I wrote “Davila’s propaganda services for Castro to date” because back in April 2000 Avila (from Havana) was busily earning his Cuba visa: "Why did Elian’s mother leave Cuba?” the furrow-browed Avila asked the (then) NBC cameras. “What was she escaping? By all accounts this young woman was living the good life.”

Would it occur to a presumably educated reporter to ask why someone tried sneaking over or under the Berlin Wall? Of course not. They’d be laughed off the screen. But as usual, the same thundering imbecility goes unnoticed with regards to escaping a Soviet-Bloc prison-nation in the Caribbean.

Some perspective on that “good life:” Between two and three hundred people (out of an average population over the decades of 18 million) died trying to breach the Berlin Wall or otherwise escape East Germany. Between sixty-five and eighty thousand people (out of an average population of 8 million over the decades) have died trying to escape Castro’s Cuba.

What makes these stats more horrific still is that prior to Castroism very few Cubans left Cuba. Indeed, prior to Castroism Cuba was swamped with more immigrants per-capita than the U.S., mostly from Europe. People from nearby Haiti jumped on rafts desperate to enter Cuba, which enjoyed a higher standard of living than much of Europe. Also, during the 1950’s when all Cubans were perfectly free to emigrate with all family, property, etc., and U.S. visas were issued to them for the asking, about the same number of Americans lived in Cuba as Cubans in the U.S. In 1953 more Cubans vacationed (then voluntarily went home) from the U.S. than Americans vacationed in Cuba.

Alas none of this features in The Godfather II. So it’s mostly unknown.

There was nothing crude or sloppy about Elian’s kidnapping by Bill Clinton’s agents. Like most major Castro-KGB propaganda operations—from Castro and Che Guevara’s (bogus) guerrilla war against Batista’s army, to Castro’s (bogus) fealty to the principles of Thomas Jefferson, to the( bogus) five gazillion assassination attempts against Castro by the CIA, to Cuba’s free and fabulous (and bogus) health-care to the (bogus) embargo that “cruelly starves the Cuban people. ..blah…blah”–as in all these immensely successful hoaxes, for the Elian-kidnapping Castro again enlisted the U.S. media as his ever-faithful propaganda arm. And again most Americans swallowed it.

For the Elian swindle Dan Rather and CBS (again) volunteered their invaluable services. Thanks to this ritual media-Democratic-Castroite collusion, most Americans missed the crucial legal and ethical details of the Elian Gonzalez circus/tragedy — which were mostly established during the first week after Elian’s rescue at sea, after his heroic mother’s drowning.

The “son-belongs-with-his-father” crowd, for instance, “missed” that Elian’s father was initially delighted that his motherless son was in the U.S. and in the loving arms of his uncles and cousins. The evidence — frantically buried by the media-Democratic-Castroite complex — was overwhelming. Mauricio Vicent, a reporter for Madrid newspaper El Pais, wrote that during that first week he’d visited Elian’s hometown of Cardenas and talked with Elian’s father, Juan Miguel, along with other family members and friends. All confirmed that Juan Miguel had always longed for his son Elian to flee to the United State. Shortly after Elian’s rescue, his father had even applied for a U.S. visa!

“Juan Miguel Gonzalez was surrounded by Castro security agents the entire time he was in the studio with Rather.” This is an eye-witness account from Pedro Porro, who served as Dan Rather’s translator during the famous 60 Minutes interview. Dan Rather would ask the question in English into Porro’s earpiece whereupon Porro would translate it into Spanish for Elian’s heavily-guarded father.

“Juan Miguel was never completely alone,” says Porro. “He never smiled. His eyes kept shifting back and forth. It was obvious to me that he was under heavy coercion. I probably should have walked out. But I’d been hired by CBS in good faith and I didn’t know exactly how the interview would be edited – how it would come across on the screen.

“The questions Dan Rather was asking Elian’s father during that 60 Minutes interview were being handed to him by attorney ( and Clinton friend) Gregory Craig,” continues Pedro Porro. “It was obvious that Craig and Rather where on very friendly terms. They were joshing and bantering back and forth, as Juan Miguel sat there petrified. Craig was stage managing the whole thing – almost like a movie director.”

Think of Elian’s father Juan Miguel Gonzalez as Frankie Pentangeli at the time. The gun Fidel Castro held to Juan Miguel’s head was as invisible (to those without experience with Communism) as the one Mikey held to Pentangeli’s head was to most spectators at those hearings.