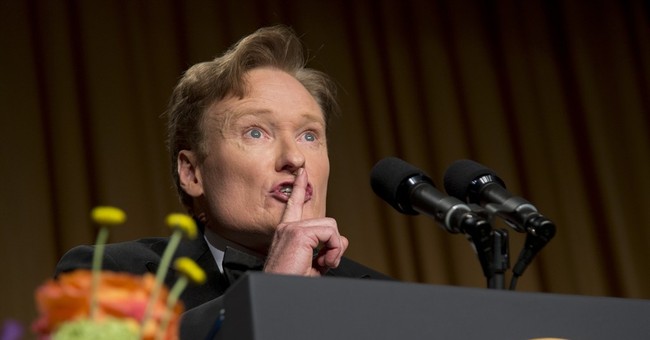 Conan O'Brien just produced and aired (pro-bono) a lengthy ad beckoning the world’s biggest market of tourists to further fill the coffers of the millionaire police and military apparatchiks of a terror-sponsoring Stalinist dictatorship. Not that any of his viewers would guess it, but over twenty times as many people have died trying to escape the (FUN!!!) place Conan advertised on his show from Cuba Wednesday night, as died trying to escape East Berlin.

Unlike so many of his skits in the U.S., however, O’Brien’s humor in Cuba was never at the expense of politicians.

Funny how that always happens. Take the “edgiest,” “snarkiest,” “cheekiest” most “irreverent” people around, from Sean Penn to Jack Nicholson, from Chevy Chase to Conan O’Brien. Put them in Stalinist Cuba (probably the most snarkworthy place on Earth.) Surround them with the juiciest targets for political satire in history (pics of the pompous fraud and incurable dork, Che Guevara, for instance.) Do all this and –POOF!—the most blisteringly irreverent gadfly magically morphs into Ward Cleaver. Never fails.

In fact, to entice viewers, O’Brien had posted a pic of himself from Havana proudly posing with “the iconic” (Conan’s term) Che Guevara. Funny that, because:

Che Guevara’s first decree when his “rebels” captured the town of Sancti Spiritus in central Cuba during the last days of the (utterly bogus) “war” against Batista's army, outlawed alcohol, gambling and regulated relations between the sexes. Popular outcry and Fidel's sharp political sense made him rescind the order.

"I have no home, no woman, no parents, no brothers and no friends," wrote the whacky cut-up in his diaries. "My friends are friends only so long as they think as I do politically."

In 1960 at a town named Guanahacabibes in extreme Western Cuba, Che Guevara set up Cuba's forced-labor camp system. "We send to Guanahacabibes people who have committed crimes against revolutionary morals," warned the party-animal, whose definition of such "offenses" proved pretty sweeping. In fact they probably read like the daily planner of many Conan viewers.

"Individualism must disappear!" thundered Che Guevara (this idol of 'do-your-own-thing' Bohemians) in a 1961 speech in Havana. Interestingly, the cheeky Ernesto Guevara's signature on his early correspondence read "Stalin II."

In a famous speech in 1961 Che the party-animal denounced the very "spirit of rebellion" as "reprehensible." "Youth must refrain from ungrateful questioning of governmental mandates" commanded Guevara. "Instead they must dedicate themselves to study, work and military service."

And woe to those youths "who stayed up late at night and thus reported to work (government forced-labor) tardily." Youth, wrote the party-animal Guevara, "should learn to think and act as a mass." "Those who chose their own path" (as in growing long hair and listening to Yankee-Imperialist Rock & Roll) were denounced as worthless "lumpen" and "delinquents." In his famous speech Che Guevara even vowed, "to make individualism disappear from Cuba! It is criminal to think of individuals!"

(All quotes above fully-documented here.)

Tens of thousands of Cuban youths learned that Che Guevara's admonitions were more than idle bombast. In Che Guevara the hundreds of Soviet KGB and East German STASI "consultants" who flooded Cuba in the early 60's, found an extremely eager acolyte. By the mid 60's the crime of a "rocker" lifestyle, long hair or effeminate behavior got thousands of youths yanked off Cuba's streets and parks by secret police and dumped in prison camps with "Work Will Make Men Out of You" in bold letters above the gate and with machine gunners posted on the watchtowers. The initials for these camps were UMAP, not GULAG, but the conditions were quite similar.

Today the world's largest Che Guevara image adorns Cuba's headquarters for its KGB-trained secret police. But the late-night TV star seems delighted to pose with a smaller rendition of the Stalinist torturer who jailed youths en masse for the crime of listening to rock and roll and staying up late at night.

What’s so snarkable about that?

Oh! What fun O’Brien and his writers could have had in Cuba if only they dared treat Stalinist, terror-sponsoring apparatchiks in the same irreverent manner as—say—U.S. Republicans.

The wily guerrilla Che Guevara immediately deciphered the Yankee-Imperialist scheme! That little feint three hundred miles away at the Bay of Pigs was a transparent ruse! The real invasion was coming here in Pinar Del Rio! Che stormed over with several thousand troops, dug in, locked, loaded, and waited for the "Yankee/mercenary" attack. They braced themselves as the sparklers, smoke bombs, and mirrors did their stuff just offshore.

In his heated battle with a tape recorder and roman candles, the masterful guerrilla Comandante managed to wound himself. The bullet pierced Che's chin and excited above his temple, just missing his brain. The scar is visible in all post-April '61 pictures of the gallant Che (the picture we see on posters and T-shirts was shot a year earlier.) Fascinatingly, the bullet that almost killed Che Guevara came from Che’s own pistol!

I’m guessing that for a former SNL writer like Conan O’Brien the (true) story of how the world’s most revered guerrilla fighter shot himself in the chin with his own gun while battling Roman candles and mirrors would provide absolutely priceless material for a skit.

Alas, in Conan O’Brien’s social and professional circles no disrespect is permitted towards the Left’s premier pin-up boy.