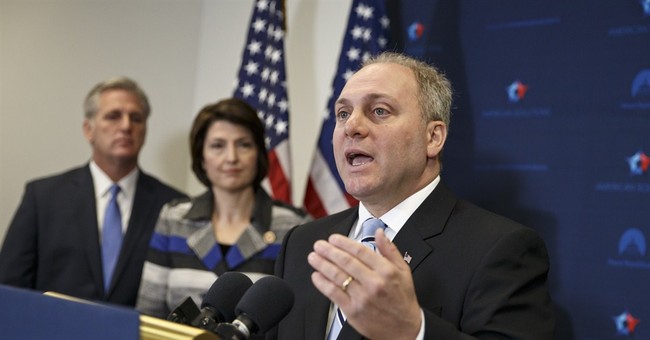 “There's no arguing that who the Republicans decide to elevate into a leadership position says a lot about what the conference's priorities and values are.” (Obama White House Press Secretary Josh Earnest referring to the recent Steve Scalise/David Duke flap.)

So the current hysteria among the Democratic/Media axis concerns the following: long ago a Republican legislator might have addressed a group led by an ex-Klansman.

Where’s Rod Serling and Franz Kafka when you really need them?

Granted, in this age of Twitter and Facebook the notion of actually researching an item before mouthing- off on it seems as quant as buggy whips. But some members of the Democratic/Media axis might try it before mouthing-off on this Scalise-Duke item.

If so they’ll quickly discover that Duke’s group were actually “yellow supremacists.” David Duke, you see, classifies east Asians (Japanese, in particular) above whites in the racial hierarchy of intellect. In brief, he accepts the findings of several IQ studies including one by Nobel-Prize winner James Watson.

So shouldn’t his enlightened appreciation of non-western cultures and shunning of simple-minded ethnic chauvinism so typical of Tea-Party types commend itself to liberals? Shouldn’t it warm the hearts of the type of people who sponsor the Smithsonian Museum, finance the Democratic Party, and appreciate Hollywood’s Tom Hanks?

Remember how major Democratic financier Tom Hanks, while recently narrating HBO’s WWII special “The Pacific,” slammed ignorant middle-American bigotry? "Back in World War II, we viewed the Japanese as 'yellow, slant-eyed dogs' that believed in different gods. They were out to kill us because our way of living was different. We, in turn, wanted to annihilate them because they were different."

And remember how the Smithsonian’s display on the Enola Gay decried the yahoo jingoism of blaming “those sneaky slant-eyed Japs!” for WWII with a more “nuanced” and ‘enlightened “view: "For most Americans,” originally read the exhibit, “this...was a war of vengeance. For most Japanese, it was a war to defend their unique culture against Western imperialism."

Well, David Duke’s “nuances” regarding that event surpass even the Smithsonian’s and Hank’s. Duke is also extremely “nuanced” with regard to U.S. “bullying” of Iran. He denounces the U.S. embargo of Iran because it “only hurts the Iranian people,” and is supported by a “tiny but rich powerful cabal of rich American string-pullers.” Such is Duke’s “enlightenment” on this issue that he made the plea on Iranian TV after a meeting with Iranian leader Ahmadinejad, where he also made heart-rending pleas for the rights of Palestinians “brutalized” by U.S. arms.

To some of us that sort of language regarding a U.S. “embargo” against a terror-sponsoring nation and such chumminess with “victims of U.S. imperialism” sure sounds familiar. But it usually issues from the very type of politicians and pundits now slamming Congressman Scalise.

In brief, shouldn’t Duke’s abhorrence of wanton “U.S. bullying of small nations,” his rejection of the “bigotry” against “slant-eyes,” “ragheads,” Persians and “Ay-rabs,” and his enlightened quest for international comity commend itself to liberals?

And by the way, his looniness aside, who has David Duke killed? Whose death has he even advocated? Fidel Castro’s murder toll, on the other hand, is estimated at close to 100,000.)

“We greeted each other as old friends,”(Jimmy Carter upon greeting Fidel Castro in 2011.)

“In 2002, we received him (Jimmy Carter) warmly,” Fidel reciprocated.“Now, I reiterated to him our respectand esteem.”

"Castro is very shy and sensitive, I frankly liked him and regard him as a friend." (George McGovern after his first Cuban visit in 1975.)

And as seen above, far from crawfishing away from any claims they chummed-up with a Stalinist, terror-sponsoring mass-murderer who wantonly tortured and murdered several of their countrymen, whose lifelong dream was to nuke their homeland, and who jailed and tortured the most and longest suffering black political prisoners in modern history of the Western hemisphere—far from edging away from their association with Fidel Castro, some very prominent Democrats gloat over the event.

And oh!....I almost forgot another very prominent Democratic Presidential candidate, who among many other Democratic accolades was honored with the Presidential Medal of Freedom by president Bill Clinton:

“Viva Fidel!—Viva Che Guevara!” yelled the Democratic presidential candidate (twice) Jesse Jackson while arm and arm with the jailer and torturer of the most and longest-suffering black political prisoners in the modern history of the Western hemisphere.

And please note, Debbie Wasserman Schulz, these were not speculative Democratic “White House hopefuls.” They were outright Democratic presidential candidates and Democratic occupiers of the White house.

So does this Democratic fondness for a mass-murdering, terror-sponsoring, war mongering Stalinist “say a lot” about the Democratic party, Obama White House Press Secretary Josh Earnest?