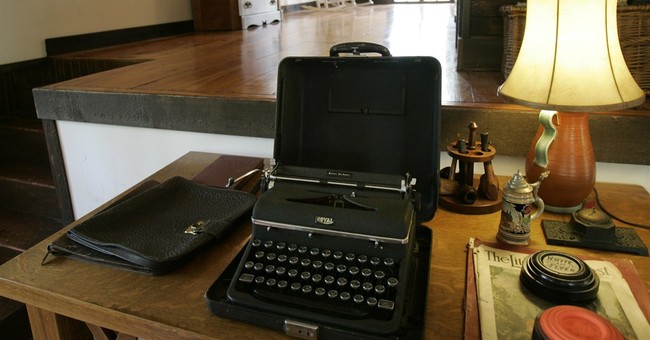 Can you imagine the reputation of a literary figure surviving the disclosure that he worked (however briefly and ineffectually) for Hitler's Abwehr?

Yet Ernest Hemingway worked for Stalin’s KGB and nobody (among the “smart set”) seems to bat an eye.

According to KGB defector Alexander Vassiliev "the 42-year-old Hemingway was recruited by the KGB under the cover name "Argo" in 1941, and cooperated with Soviet agents whom he met in Havana and London. This comes from a book published in 2009 by Yale Univ. Press (not exactly a branch of the John Birch Society.)

"Castro's revolution," Hemingway wrote in 1960, “is very pure and beautiful. I'm encouraged by it. The Cuban people now have a decent chance for the first time." Perhaps this was fitting praise from Hemingway for a regime that transplanted Stalin’s into the Caribbean. Except that Castro and Che Guevara’s regime jailed and tortured political prisoners at a slightly higher rate than did Stalin’s.

Hemingway knew full well what was going on “behind the scenes” of Castro and Che’s “pure and beautiful” revolution. To wit: as commander of Havana's La Cabana prison and execution yard in the early months of the Revolution, Che Guevara often coached his firing squads in person then rushed up to shatter the skull of the convulsed man (or boy) by lovingly firing the coup de grace himself. When other duties tore him away from his beloved execution yard, Che consoled himself by viewing the slaughter. His second-story office in La Cabana had a section of wall torn out to better view his darling firing-squads at work, often in the company of distinguished friends. Havana resident Ernest Hemingway was one of these.

Accounts of "Papa's” Hemingway’s presence at these massacres comes courtesy of Hemingway's own friend, the late George Plimpton (not exactly an “embittered right-wing Cuban exile”) who worked as editor of the Paris Review, (not exactly a "Mc Carthyite scandal sheet.")

In 1958 George Plimpton interviewed Hemingway in Cuba for one of the Paris Review’s most famous pieces. They became friends and the following year Hemingway again invited Plimpton down to his Finca Vigia just outside Havana. An editor at The Paris Review during the 1990’s, while relating how this high-brow publication passed on serializing the manuscript that became Che Guevara’s Motorcycle Diaries, reveals “Papa’s” unwitting role in the rejection.

“A writer without a sense of justice and of injustice would be better off editing the yearbook of a school for exceptional children than writing novels,” wrote Hemingway in that very Paris Review interview with George Plimpton. “The most essential gift for a good writer is a built-in, shockproof, sh*t detector.”

So was Hemingway duped by Castroism? Did his sh*t-detector malfunction? Or was it on high-alert? Few people, after all, had such access to Castroism’s crime scenes. And the KGB, while certainly appreciating the work of dupes and useful idiots, was not known to (openly) sign them on.

And speaking of Hemingway’s grandsons, John and Patrick. Earlier this month they signed on as Castro-regime travel agents by promoting tourism and fishing to the Stalinist island. Imagine the snark-fest such as Saturday Night Live, Jon Stewart, Bill Maher, etc. might indulge about a fishing tournament in a nation whose subjects (who pre-Castroism considered boat-ownership almost a birthright) are now prohibited by jail and torture-chamber from owning boats.

Even snarkier, the tournament is promoted by a pair of gold-digging celebrity progeny who make Paris Hilton look like Rosie the Riveter. Imagine such a thing--that is--if the beneficiary of their tourism promotion ad been a “U.S.-friendly right–wing dictatorship,” instead of a Stalinist dictatorship who craved to nuke the U.S.

Oh I know, I know , many folks out there with a bumper-sticker knowledge of Castroism and a fetish for swallowing and parroting utopian dogma as revealed by their cult leaders rather than examining the actual evidence of human action ( i.e. some libertarians) claim tourism to Cuba will magically eradicate Castroism, and KGB-trained secret police and their torture-chambers will be magically replaced by unicorns and rainbows--if only given a chance.

Similar to another drug-addled utopian fantasist, all they are saying is: give tourism a chance.

You might recall the disaster for Southeast Asians when “peace was given a chance” in Southeast Asia (hundreds of thousands murdered in a “re-education” Gulag or drowned while attempting escape.) Well the tourism given a chance in Cuba has also ended disastrously for Cubans.

In Cuba we’re dealing with true-life Communists, amigos. Not with think-tank eggheads, coffee-house poets, or Wavy-Gravy handing out love-beads at Woodstock. If the history of the 20th century teaches anything it’s that giving diehard Commies unfettered access to guns and money entails woe for any prospect of their subjects’ freedom.

For two decades now Cuba has been hosting from five to ten times the number of tourists annually as it did in the 1950’s, when it was known as a “tourist playground.” Result?

Record repression for Castro’s subjects. The Heritage Foundation’s Index of Economic Freedom shows no loosening in Cuba’s repression during this tourism windfall. It’s as bad or worse as during the long years of Soviet overlordship. In fact, for over a decade, Cuba has consistently ranked as the most economically repressive regime in the hemisphere and among the four most repressive on earth, consistently nudging North Korea for top honors.