The GOP’s Argument In Ten Points: What The Key Republicans Need To Be Saying Everywhere, All The Time 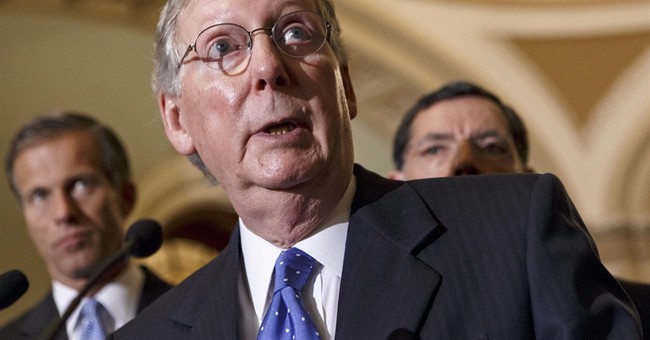 E.J. Dionne tweeted out a pointer Friday morning to this TPM post that has the lefties very excited about how they are "winning" the shutdown.

Odd way to read a poll, when 52% blame everybody or just the Democrats, but the Democrats have been math challenged for a long time. Viewed through the lens of the 2014 elections, this poll is wonderful news for the GOP, as the narrative of President Nobama is emerging --no negotiations, no compromise, no nothing. President Obama will negotiate with the Syrian butcher Assad and erase the fabled "red line" when told told to by Russian President Putin, and he will negotiate with the happy face of the killer regime in Iran, President Rouhani, but not with Republicans over issues all presidents have always negotiated over.

The lefty media is busy trying to spook the nervous among the GOP with stores as hyper-partisan as this one from Friday's New York Times --a "round up the usual suspects" story if there ever was one.

That story neglects to note what GOP Senate Leader Mitch McConnell said very clearly on my show Thursday (full transcript here) and in other venues as well:

HH: Now in terms of the end result here, do you see a possibility that the Republicans will simply fold and pass what is known as a clean CR and a straight debt limit? In other words, just collapse in the face of the President’s stridency?

MM: No, I don’t think there’s any chance of that.

And, later in the same conversation:

HH: Last question, Senator McConnell, I just want to be clear, then. You do not see any way, do you, that a clean CR and a straight debt limit with no conditions attach pass the House and the Senate?

MM: No, that will not happen.

The MSM is working overtime to create the appearance of significant splits within the GOP, while ignoring huge fissures among House Democrats and crucial facts such as the fact that the House GOP has sent the Senate nine different bills to end the government shutdown and will send more, while the Senate has sent the House exactly one bill and Reid is saying my way or the highway.

It is hard to keep the rhetoric of hostage taking going when those government services the public most cares about are being shut down by the inaction of the Senate and president for nakedly political purposes.

I spent considerable time exploring this subject with Politico's Dylan Byers Thursday --the full transcript is here-- and it becomes obvious after even a small bit of serious conversation that the hostage nonsense just doesn't work for Democrats or the MSM longer than 30 seconds. But it does take longer than 30 seconds. It takes an argument, and thus far, not many senior Congressional GOPers are willing to go out and make the argument.

The House and Senate Republicans have been blessed by having as their opponents Harry Reid and the president, as both have been mumble-mouthed in recent days on what they are trying to do, and not even their phalanx of adoring MSMers can quite stop themselves from pointing out that the kids not getting cancer treatments, the veterans denied their services and the visitors to the national parks are all being used quite callously by Harry Reid and President Obama, nakedly manipulated so that the vast, vast hulking machinery of the federal government can spring back to life, with Obamacare fully embedded within it.

But in order to win the larger debate, and especially the debate that occurs as the CR and Debt Limit debates combine --which has already really happened-- the GOP will have to forcefully and repeatedly make good and detailed arguments, and as I wrote Thursday, there are really only a dozen (give or take one or two) GOPers who matter in making this argument. Ask yourself: Have you seen or heard them in extended conversation on this debate anywhere?

Congressman Tom Price (the likely Budget Chair in waiting when Paul Ryan either becomes Speaker or head of Ways and Means).

I have hosted Leader McConnell, as well as Senators Cruz and Rubio on the show this week or last. Perhaps others have appeared on other outlets though I have not seen them. Right now all of these opinion leaders need to be everywhere that will give them at least five minutes, all making the same key points:

1. Article One of the Constitution makes the Congress a separate-but-equal branch with the president. The president is not a king and cannot dictate terms. The House, especially, is the People's House, elected most often to most closely represent the views of the people.

2. We understand the president has had a horrible year, that he lost his big battles with Congress and lost a lot of face and self-confidence in the surrender to Syria and Russia, and we understand he is desperate for a win.

3. Acting like a schoolyard bully who got beat up and then looks for someone to pick on will not work with a separate but equal branch of government.

4. We have long known the president lacks basic skills when it comes to negotiating, but we aren't going to negotiate away our Article One duties and authority because the president is throwing a childish fit because Vladimir Putin embarrassed him.

5. We know most of the MSM is with the president and protecting his childishness from full scrutiny. We know they are doing the same for Harry Reid, though Senator Reid's infortunate melt-down with Dana Bash showed that not even the MSM can fully protect Senator Reid all the time. We believe the public already knows or will soon learn the score, and that we don't need the Manhattan-Beltway media elite to cheerlead for us since we have the Constitution on our side.

6. The real situation is this: The Republicans want the NIH opened to sick children and everyone served by it. We want the VA open to take care of veterans. We want the national parks and memorials open to everyone. We are appalled that the president has deemed the cemetery at Normandy non-essential. The last resting place of the men who saved Europe was essential in '44 and it is essential now. Recall Tom Hank's Captain John Miller's last words in that movie "Earn this"? Well, we won't be earning it if we surrender the Article One powers given us because the president demands we do, because he is throwing a fit, because he won't negotiate.

7. There are lots of solutions and combinations of solutions here, and we have often seen the Legislative and the Executive branches sit down at such moments and craft such solutions. Never before has a president said he would not negotiate with a separate but equal branch of government. The Speaker is the single man representing the People's House, and the president should be working with him, not taunting him in public; should be trying to offer solutions, not further dividing an already divided country.

8. So, again, we want to be crystal clear: The House is going to keep sending over to the Senate bills as particular needs arise to fix those needs, and Leader McConnell will keep trying to bring those solutions up for a vote. We think Harry Reid should take them up and ease the pain on Americans. We think the cemetery at Normandy should be open, just like the World War II Memorial and the Martin Luther King Memorial and especially the Lincoln Memorial should be open. We think the NIH and CDC should be functioning, and FEMA as hurrican season approaches. And we think we need to take serious steps to reform entitlements, repeal the widely recognized and disastrous Medical Device Tax, and treat Members of Congress an their staffs and members of the White House staff just the same as every other American by either bringing them under Obamacare or delaying the individual mandate one year. That is all on the table. Perhaps the president has other ideas though his only argument has been my way or the highway, the rule of one, the prerogatives of a king.

9. We don't do kings, Mr. President. Certainly not a year after a close election, a close election in which your opponent got 60 million votes and in which the People's House remained firmly in Republican hands. The country votd for divided government, for negotiations, for shared responsibility, not for you to dictate terms.

10. There will be no "clean CR" and a "straight debt limit hike." Period. That's what the president is demanding and that won't happen. The president is trying to scare markets and they should be scared because if he truly intends to bring about economic panic he is doing a fine job by demanding that the House abdicate its Constitutional role. We won't do that. The Constitution is more important than the CR, or the debt limit. The president is trying to reshape the Constitution at this moment of economic peril, using the media as his hammer, and threats and bullying as his saws. But it won't happen. And if the president does not change his rhetoric and his approach, the crisis that follows will be 100% on his head, and the American people will know it, and history will record it.