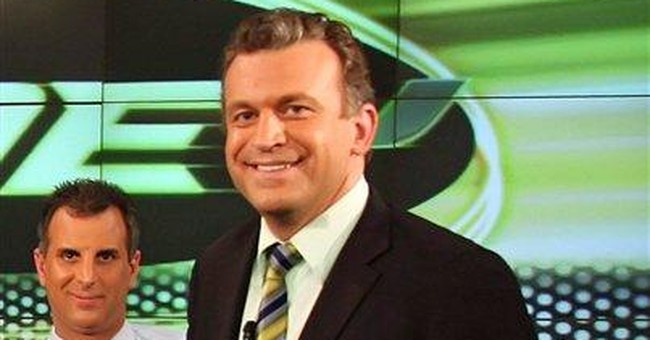 MSNBC's decision to dump Donny Deutsch as an anchor following a show which featured me as a guest has garnered a lot of comments.

The New York Times reports on it here. The Huffington Post here. Newsbusters comments here and provides a transcript of the segment.

At a minimum the decision to dispatch Donny demonstrates that MSNBC is definitely not "the place for politics," as the network has taken to marketing itself as, but rather the place for hard-left politics only, and of a particularly thin sort to boot.

Deutsch's sin appears to have been an insufficiently vigorous defense of Keith Olbermann and Ed Schultz, two of the lightest feathers in the media breeze.

Deutsch's apostasy went so far as to include a clip of Keith on one of his familiar rants in the same sequence that featured Rush and Glenn Beck.

Deutsch's shtick this week had been "anger in America," and when Deutsch asked for my opinion on the credibility and impact of talking heads on the political climate, I began with the obvious: Olbermann and Schultz are the biggest hate-mongers on cable, and that before anyone on MSNBC begins to lecture the world on how to conduct civil discourse, the physician would have to heal himself.

When Deutsch pushed back on Schultz, I made the obvious point that Ed is a joke, a position from which I would not be moved, and to which Donny took exception, citing Ed's "big heart" --an ironic description given Schultz's recent rant about Dick Cheney's ticker.

(The irony of Donny waxing on anything to do with civility following his description of Marco Rubio as a "coconut" was also lost on the host and his producers.)

When the segment was over, so was Donny's career on MSNBC though the ax didn't drop until the next day. Rule #1 in MSNBC-land: Never say anything bad about Keith or Ed or allow a guest to voice an unflattering opinion about them no matter how widely shared across the country.

And there we have the reason for MSNBC's dismal ratings. For most viewers interested in real, vigorous, entertaining debate about serious political issues built on sustained argument, there is no reason to watch much of the programming on MSNBC as there are few dissenting voices from the uber-left ideology ruling there. The hard left will watch for ratification of their views, but the daily exchanges are so lopsided and rigged, the censorship of the opposition so extreme, that most of the potential audience long ago left for Fox, where a lefty viewer will find a Mara Liasson, a Juan Williams or someone from the left side of the political spectrum and, crucially, they will be given a chance to make their points and they will be treated with respect. When Sean Hannity brings together his "Great American Panel" every night, to cite another example, there will always be at least one informed lefty who will be given ample opportunity to make his or her points. Bill O'Reilly revels in long and sharp exchanges with both left and right, and while he of course sets the tempo and the agenda, he never denies his guest the opportunity to make the key points in their case.

This is good programming, and it is the reason why lefties are welcomed on my radio show week in and week out. It builds audience and entertains even as it informs.

This is simply --objectively-- not the case on most of MSNBC's programming, and the minuscule audience that follows it presently will not grow and cannot ever hope to catch Fox as a result. There are still some journalists appearing on the network worth watching --Howard Fineman, Chris Cillizza, Jonathan Alter, and Chuck Todd to name a few who, no matter what their politics are, remain pros with good information to convey-- but their numbers are dwindling and their personal brands are increasingly at risk simply because of their association with a one-dimensional hyper-partisan echo chamber that refuses to recognize much less debate with much of the American mainstream.

What is most amazing is that execs at the network are resigned to losing. They obviously don't believe they can ever catch up to FNC, much less ever produce a product that could win a ratings contest with the lineup that Roger Ailes engineered.

Dumping Donny under the bus because of a few seconds of video or six minutes of conversation with me underscores the extreme insecurity of the left when confronted over the nature of their discourse or the quality of their arguments. It also signals that MSNBC has embraced their inner loser.