A Real Conservative Manifesto on Immigration 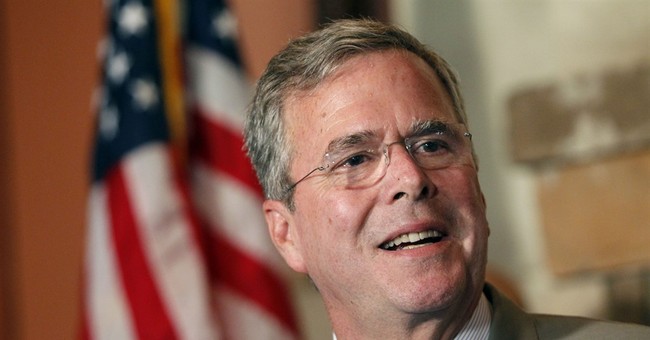 Will Rogers said, "When you find yourself in a hole, stop digging." Unfortunately, that's not Jeb Bush's approach when it comes to the his recent controversial comments on "anchor babies." Recent video shows that in order to get out the hole Donald Trump dug for him, Jeb said the term "anchor babies" was “more related to Asian people coming into our country, having children.” In other words, Jeb played racial politics in a very clumsy way by throwing one racial group under the bus in order to please the other group . So he managed to offend both groups successfully and solidify the Democratic narrative that Republicans do not like immigrants. No wonder Donald Trump wasted no time to tweet it out that "Asians are very offended that JEB said that anchor babies applies to them as a way to be more politically correct to Hispanics. A mess!"

In the same video, Jeb asked the public to "chill out," as if this was not a big deal. But the only person who needs to "chill out" and stop talking for a while is Jeb Bush. I'd like Jeb to reflect on why he is running for president of the United States. He said Trump was not a real conservative, which I agree. But Jeb has failed to present himself as a real conservative candidate either. So far, rather than presenting real conservative principle based ideas and policies, all Jeb has been doing is to play defense at whatever ideas Trump throws out. For example, on the issue of immigration, Jeb has been letting Trump set the tone and agenda of every discussion. Consequently, Jeb appears small and not presidential.

"The immigration issues we are facing today are the unintended consequences of an outdated immigration policy, which does not serve our country’s economic needs or national interest.

We don’t do enough to keep those who intend to harm America out; yet at the same time, we make it difficult for those hardworking, America-loving, law-abiding people to come and stay. Our immigration policy sends a mixed message and exacerbates the illegal immigration problem.

We are the party of Lincoln and the party has been dedicated throughout the history to advancing human freedom and every person's right to life, liberty and the pursuit of happiness. We believe America's founding principles have a universal appeal.

We should simplify our overly complex and bureaucratic immigration system by getting rid of the hundreds of existing visa categories. We need only one visa category: a becoming American visa category. The criteria is simple:

Anyone who meets this criteria, regardless of skin color, race, religion, culture, or family name, is an American! We welcome you!

We can't win the next election by following the same Democratic playbook of pitting one identity against another identity. Instead, conservatives need to support principle based policies that serve that benefits America. By doing so, they will serve the needs of both native born and immigrant Americans. Such a policy will also help conservatives make inroads into immigrant communities. A good policy is good politics!