Heather Mac Donald is a John M. Olin Fellow at the Manhattan Institute and a contributing editor of City Journal. She also is a recipient of 2005 Bradley Prize for Outstanding Intellectual Achievement.

Mac Donald's work at City Journal has canvassed a range of topics including homeland security, immigration, policing and "racial" profiling, homelessness and homeless advocacy, educational policy, the New York courts, and business improvement districts. Her writings have also appeared in The Wall Street Journal, the Washington Post, The New York Times, The New Republic, Partisan Review, The New Criterion, Public Interest, and Academic Questions. Her book The Burden of Bad Ideas—a collection of essays from the pages of City Journal—details the effects of the sixties' counterculture's destructive march through America's institutions. Her second book, Are Cops Racist?—another City Journal anthology—investigates the workings of the police, the controversy over so-called racial profiling, and the anti-profiling lobby's harmful effects on black Americans. Her most recent book, The Immigration Solution: A Better Plan Than Today's, coauthored with Victor Davis Hanson and Steven Malanga, chronicles the effects of broken immigration laws and proposes a practical solution to securing the country's porous borders.

A non-practicing lawyer, Mac Donald has clerked for the Honorable Stephen Reinhardt, U.S. Court of Appeals for the Ninth Circuit, has been an attorney-adviser in the Office of the General Counsel of the U.S. Environmental Protection Agency, and a volunteer with the Natural Resources Defense Council in New York City. She has testified before the Subcommittee on Civil and Constitutional Rights of the Committee of the Judiciary of the U.S. House of Representatives; the United States House of Representatives Committee on the Judiciary Subcommittee on Immigration, Border Security, and Claims; the United States Senate Select Committee on Intelligence; and the House Judiciary Subcommittee on Crime, Terrorism, and Homeland Security. In 1998, she was appointed to Mayor Rudolph Giuliani's task force on the City University of New York, thanks in large part to her City Journal essays on education. The New Jersey State Law Enforcement Officers Association conferred its Civilian Valor Award on her in 2004. She was awarded the 2008 Integrity in Journalism award from the New York State Shields. She was also the recipient of the 2008 Eugene Katz Award for Excellence in the Coverage of Immigration from the Center for Immigration Studies. She is also a frequent guest on FOX News, CNN, and other television and radio programs.

Mac Donald received her B.A. in English from Yale University, graduating with a Mellon Fellowship to Cambridge University, where she earned her M.A. in English and studied in Italy through a Clare College study grant. Her J.D. is from Stanford University Law School. 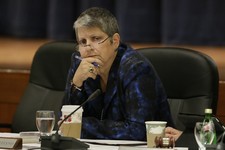