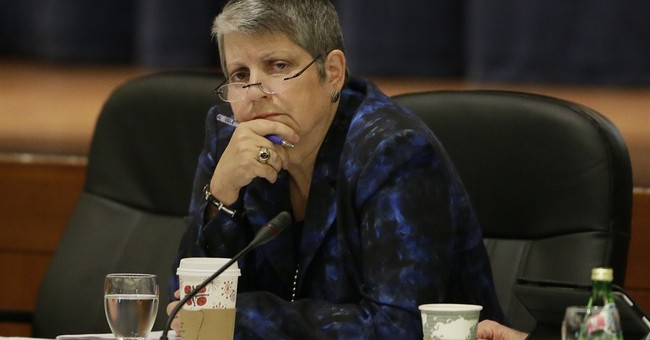 Early this year, the University of California’s president, Janet Napolitano, asked all deans and department chairs in the university’s ten campuses to undergo training in overcoming their “implicit biases” toward women and minorities. The department heads also needed training, according to the UC president, in how to avoid committing microaggressions, those acts of alleged racism that are invisible to the naked eye. A more insulting and mindless exercise would be hard to imagine. But Napolitano’s seminar possesses a larger significance: it demolishes any remaining hope that college administrators possess a firmer grip on reality than the narcissistic students over whom they preside.

The “Fostering Inclusive Excellence: Strategies and Tools for Department Chairs and Deans” seminar presumes that University of California faculty are so bigoted that they will refuse to hire the most qualified candidate for a professorship if that candidate happens to be female or an “underrepresented minority”—i.e., black or Hispanic. Attendees at the seminar were subjected to an “interactive theater scenario” called “Ready to Vote?” that showed white male computer-science professors on a fictional hiring committee belittling females and failing to “value diversity.” The author of the scenario, a professor of performance studies and ethnic studies at the University of California, San Diego, seems never to have attended a faculty-hiring committee meeting in her life. Nor, it would seem, has Janet Napolitano. How otherwise could they not know that every faculty search in the sciences, far from shunning females and URMs, is a desperate exercise in tracking down even remotely qualified female and non-Asian minority candidates who haven’t already been snapped up by more well-endowed competitors? Females in the sciences are hired and promoted nationwide at rates far above their representation in applicant pools. (Too few URM science Ph.D.s exist to have inspired many reliable studies analyzing their hiring chances.)

The “Fostering Inclusive Excellence” seminar supplemented the patent fictions in “Ready to Vote?” with an equally specious handout, “Identifying Implicit Bias,” which claims that females and URMs are required to meet higher academic standards than white males and that their work is scrutinized more closely by hiring committees. This conceit was preposterous 30 years ago when it first became widespread and is even more so today. True, there is a double standard in hiring, but it redounds to the benefit of females and URMs, as anyone with the remotest exposure to academic culture should know. An entire subspecialty of diversity agitation argues that nontraditional forms of scholarship, such as personal memoirs or the collective editing of anthologies, should be viewed as equivalent to publications in peer-reviewed journals during tenure evaluations, when URMs and females are performing those activities. The advocacy for nontraditional credentials for “diverse” candidates has largely succeeded, especially in the social sciences and humanities.

To voice these realities, however, is to commit a microaggression, according to University of California diversity enforcers. Another handout inflicted on “Fostering Inclusive Excellence” attendees presents a long list of microaggressions, categorized by “Theme” and “Message.” The “Myth of Meritocracy” “theme” includes such statements as: “Of course he’ll get tenure, even though he hasn’t published much—he’s Black!” The “message” conveyed by this particular microaggression, according to UC’s “Recognizing Microaggressions Tool,” is that “people of color are given extra unfair benefits because of their race.” Now where would anyone get that idea? Well, you might ask any high school senior, steeped in his class’s SAT rankings, if it’s true that “people of color” are given “extra benefits” in college admissions. He will laugh at your naïveté. A 2004 study of three top-tier universities, published in Social Science Quarterly, found that blacks were favored over whites by a factor of 5.5 and that being black got students an extra 230 SAT points on a 1,600-point scale. Such massive preferences for URMs are found at every selective college and graduate school. Every student knows this, and yet diversity protocol requires pretending that preferences don’t exist. The race (and gender) advantage continues into the academic workplace, as everyone who has sat on a hiring committee also knows. But President Napolitano is determined to brand anyone who violates that collective fiction as a closet racist, someone who targets “persons based solely upon their marginalized group membership,” in the words of the “Microaggressions Tool.”

Other alleged microaggressions include uttering such hurtful words as “I believe the most qualified person should get the job” or “America is the land of opportunity” on a UC campus. Someone who has been through the “Fostering Inclusive Excellence” seminar may call you out for giving voice to such ideas. Why exactly saying that the most qualified person should get the job is a microaggression is a puzzle. Either such a statement is regarded simply as code for alleged antiblack sentiment, or the diversocrats are secretly aware that meritocracy is incompatible with “diversity.”

Equally “hostile” and “derogatory,” according to the “Tool,” is the phrase “Everyone can succeed in this society, if they work hard enough.” Such a statement is obviously an insult to all those career victims whose primary occupation is proclaiming their own helplessness and inability to accomplish anything without government assistance.

Many purported microaggressions arise from the contradictions in diversity ideology. Authorities in a diversity regime are supposed to categorize people by race and ethnicity—until that unpredictable moment when they are not supposed to. Assigning a black graduate student to escort a black visiting professor, for example, is a microaggression, per the “Tool.” But wasn’t the alleged need for role models and a critical mass of “persons of color” a key justification for “diversity”? Describing a colleague as a “good Black scientist” is another microaggression. But such a categorization merely reflects the race-consciousness and bean-counting that the campus diversity enforcers insist upon.

Color-blindness constitutes an entire microaggression “Theme” in the “Tool,” pace Martin Luther King, Jr. Beware of saying, “When I look at you, I don’t see color” or “There is only one race, the human race.” Doing so, according to the “Tool,” denies “the individual as a racial/cultural being.” Never mind that diversity ideologues reject the genetic basis of racial categories and proclaim that race is merely a “social construct.” The non-diverse world is under orders both to deny that race exists and to “acknowledge race,” in Tool-parlance, regarding Persons of Color.

Other microaggressions provide a glimpse into the future. It may seem like a stretch today to label as a microaggression “being forced to choose Male or Female when completing basic forms,” but it won’t remain a stretch for long. The movement to discredit binary, biological sex distinctions is accelerating weekly; expect more institutions to accede to the demand to allow their members to choose from an array of “gender” possibilities and combinations or face protest.

Though participation in “Fostering Inclusive Excellence” was, in theory, voluntary, Napolitano had informed the deans and chairs that she would be briefed on attendance and the “tenor of the conversations.” Her office would not disclose the turnout for the seminars. It would be a good barometer for whether the faculty possesses any remaining spine.

The ultimate question raised by the seminar is: Are there any adults left on campus, at least in administrative offices? And the answer is: no. An adult administrator would realize that he is presiding over the most tolerant, well-meaning, and opportunity-filled community in human history. He would understand that the claim that females and minorities are the victims of discrimination on campuses is sheer fiction. He would know that teaching students to go around ferreting out imaginary slights does them a disservice.

Maybe that administrator is so cowardly that, while he knows these things, he is not willing to assert them in the face of student agitation for more victim infrastructure. Such cowardice is deeply unfortunate. But at least it holds out the possibility for some return to sanity at a later date. The most disturbing aspect of “Fostering Inclusive Excellence” is that it was initiated by the president’s office without outside provocation. Had Napolitano not come up with these antibias trainings, no one would have noticed their absence. Instead, she has sua sponte promulgated an initiative deeply ignorant about how seriously most professors—at least in the sciences—take their responsibilities to build up a faculty of accomplishment and research prowess. We have come to expect such ignorance from coddled, self-engrossed students. Now it turns out that those students may be the least of the university’s problems.