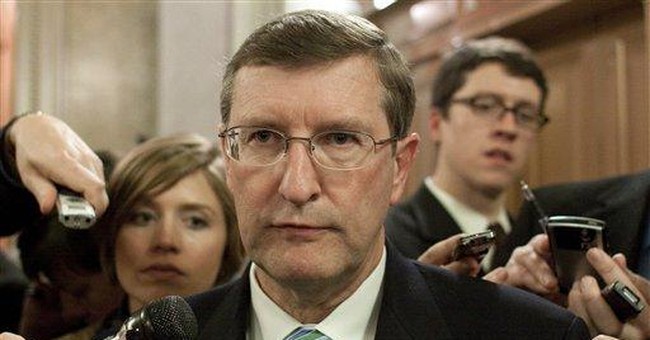 Last fall, Republicans rode a wave of anti-Democratic public sentiment and achieved historic gains in the midterm elections.  The GOP seized the House of Representatives with a net pickup of 63 seats, but fell four votes shy of a majority in the Senate.  Given the nonstop nature of modern American politics, operatives from both parties are already gaming out scenarios for the 2012 election cycle.  The political topography heavily favors Republicans, who appear well positioned to secure at least a bare majority next year if they competently manage their strong hand.

Of the 33 seats that are up in 2012, 23 of them are currently held by Democrats or "independents" who caucus with Democrats.  Republicans face the comparatively modest task of defending just 10 seats, only a small handful of which are expected to be competitive races.  Adding to next cycle's volatility is a recent string of Senate retirements – eight so far – that is historic in its own right.  The Fix reports that nearly one-fourth of the entire 2012 Senate class has already opted out of seeking re-election, representing “one of the biggest classes of retirees in history.”

A key to success in electoral politics is prioritization. How are Republicans planning to turn a 47-53 Senate disadvantage into a majority next year?  The math is fairly simple, according to a number of GOP strategists:  Pluck four low-hanging seats away from Democrats, and work on augmenting a majority from there.   Republicans believe they can plausibly compete for at least ten seats currently controlled by Democrats.

(2)   Nebraska:  Sen. Ben Nelson may have sealed his own fate when he voted for Obamacare in 2009.  During that process, Nelson struck a backroom deal to land his state a notorious carve-out known colloquially as the Cornhusker Kickback.   His most prominent early GOP challenger – state Attorney General Jon Bruning – shrewdly purchased the domain rights to CornhuskerKickback.com, which he’s using to galvanize public opinion against the incumbent.   His effort may not be too arduous: Nelson is deeply unpopular in Nebraska, already trailing Bruning by double-digits in early polling.  In an anecdotal sign of Nebraskans’ disenchantment with their senior senator, in the wake of his Obamacare vote, Nelson was booed out of a pizzeria by ordinary Nebraskans – who aren’t typically known for their confrontational politics.

(3)   Virginia:  The stars aligned for Sen. Jim Webb in 2006.  He ran as a moderate Democrat in a horrible year for Republicans generally, support for the Iraq war had reached an all-time ebb, and his opponent committed a costly gaffe.  Former Sen. George Allen, the man Webb narrowly defeated, now plans to atone for his disastrous loss six years ago by reclaiming his old seat.  Considering the whippings Virginia Democrats have sustained at the polls over the last two years, Webb has decided to depart the scene and retire.  Democrats are practically begging former Governor Tim Kaine to run for the open seat, but Kaine’s role as DNC Chairman ties him inextricably to an agenda Virginia voters have forcefully repudiated in consecutive elections.

(4)    Montana:  Sen. Jon Tester is another Democratic freshman who barely squeaked by in 2006.  He did so in a state President Bush carried by 20 points in 2004, and that John McCain won four years later.  Despite his studied red state effect, Tester voted for several big-ticket Obama agenda items, including Obamacare and the so-called stimulus package.  His Republican opponent, Rep. Denny Rehberg, holds an early lead in several preliminary polls.

(5)   Missouri:  The Show-Me-State hasn’t been showing much love to Democrats lately.  It was one of the only swing states to back John McCain over Barack Obama in 2008, and Missourians overwhelmingly sided with Republicans in last year’s midterms.  As iconic Blue Dog Rep. Ike Skelton learned last year, a red-trending state is a precarious place for a Democratic incumbent to be, which is why Sen. Claire McCaskill should be nervous.  McCaskill is a specialist at projecting a moderate air while remaining a reliable liberal vote.  While she’s fortunate that her former nemesis, Sen. Jim Talent, has decided against running again, McCaskill still polls poorly against a slew of relatively unknown potential challengers.  The liberal blog Talking Points Memo says McCaskill’s early weakness makes her “vulnerable for defeat.”

(6)   Florida:  In another state that flirted with the blue crew in 2008 before racing back to crimson safety in 2010, Sen. Bill Nelson may face a steep re-election climb next year.  Floridians emphatically chose conservative super star Marco Rubio as their newest Senator last November, and appear open to replacing Nelson in the next cycle.  Nelson already trails popular former Governor Jeb Bush by eight points in a hypothetical matchup, and fails to crack the crucial 50 percent mark against four other possible opponents.  President Obama will be at the top of Nelson’s ticket next year, which might not help in the Sunshine State: The president’s state approval rating has fallen 11 points since 2009 to 46 percent.

(7)   West Virginia: President Obama’s approval rating in West Virginia is a dismal  33 percent, and unlike when West Virginians sent Sen. Joe Manchin to Washington in 2010, Obama will be at the top of the ballot next year.  If Republicans can field a credible candidate with solid name ID, this race could be close.  Republicans are urging Rep. Shelley Moore Capito to run against Manchin, who has already voted against Obamacare repeal and has been conspicuously absent for a number of other controversial votes.  Capito trails Manchin in early polling, but the incumbent barely hits 50 percent against her.  GOP insiders remain jaded about their party’s chances in this race – Mountain State voters routinely side with Republican presidential candidates by healthy margins, but make a habit of electing Democrats to statewide office.

(8)   New Mexico: This race likely wouldn’t have even cracked the top ten a few weeks ago, but following Sen. Jeff Bingaman’s surprise retirement announcement last month, it’s very much in play.  New Mexico is a quintessential purple state: Al Gore won it in 2000, then Bush prevailed in 2004, before it flipped back into the Democrat column in 2008.  Last year, Republican Suzanna Martinez won the gubernatorial race, and the GOP took back one of the state’s three House seats.  DSCC designs on retaining the seat have been complicated by the recent entry of widely-respected former Rep. Heather Wilson into the race.  According to a recent survey, Wilson enjoys a 71 percent favorable rating in the Land of Enchantment.

(9)   Michigan:  Sen. Debbie Stabenow’s poll numbers are dreadful.   A January survey found that “only 37 percent [of Michiganders] approve of Stabenow’s job performance, and 23 percent would vote to re-elect her.”  Meanwhile, a generic Republican pulled 43 percent in the same poll. Michigan had been a bit of a political wasteland for the GOP in recent years, but they reclaimed the governorship, the state House, and two US House seats in the 2010 election.  It may be a tough task in a presidential year, but Republicans are hopeful they can take advantage of Stabenow’s woeful approval ratings, and up-end her.  This race is on Democrats’ minds; Senate leadership last month chose Stabenow to introduce a popular amendment repealing a particularly harmful provision of Obamacare, for which she received positive press.

(10)  Ohio: Democratic pollster PPP calls Sen. Sherrod Brown’s 2012 poll position “dangerously low.”  A December survey showed Brown tied with, or narrowly leading, a number of potential challengers – several of whom were unknown to roughly 2/3 of voters.  Other polls paint a slightly sunnier picture for the incumbent.  Ohio was swept up in the 2010 red tide, as Republicans won the Governorship and gained five House seats.  If Ohio voters decide to stay scarlet in 2012, Brown’s seat could be ripe for the picking.

-          New Jersey, where Sen. Bob Menendez is being dubbed “the forgotten Senator.”  His job approval languishes at 34 percent, and a higher percentage of voters (38 percent) say they don’t know who he is.

-          Wisconsin, where Rumors are flying that 76-year-old incumbent Herb Kohl may soon join the retirement herd, and DSCC chair Sen. Patty Murray is ducking questions on the subject.  It’s a state that experienced a Republican renaissance in 2010, which included the ouster of Sen. Russ Feingold.

Even if the GOP fails to win any of the third-tier or long shot races, Republican operatives are confident Democrats will be forced to spend precious resources defending typical liberal strongholds, which would make the NRSC’s majority-seeking quest quite a bit easier.

-          Massachusetts, where nobody seems eager to challenge cash-laden Sen. Scott Brown (although national Democrats are already lobbing surreal grenades at him).

-          Maine, where Democrats are praying that conservatives target Sen. Olympia Snowe in a primary.  Tellingly, arch-conservative Governor Paul LePage has already lined up behind Snowe.

-          Arizona, where Sen. Jon Kyl’s retirement could crack open the door for Rep. Gabrielle Giffords to win the seat, if she’s well enough to run – which remains a major “if.”