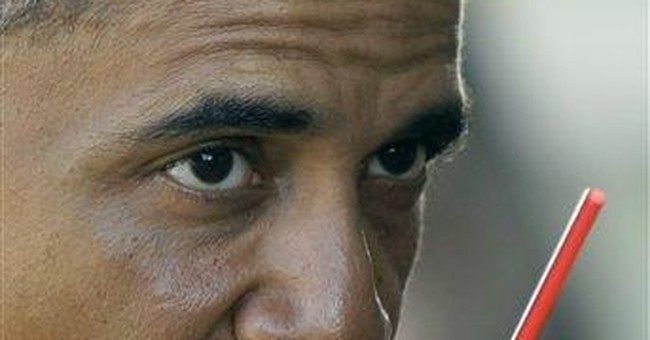 It’s a piece of political conventional wisdom that’s been repeated many times: The cover-up is usually worse than the crime. A series of votes by Barack Obama in the Illinois Senate, however, turns that famous statement on its head. As a state legislator, Obama spoke out against, and voted down, a bill that would have explicitly extended legal protections to born-alive premature infants. In other words, he cast a vote against banning infanticide. Making matters worse — if such a thing is possible — the explanation Obama has peddled over the years to justify his vote has recently been exposed as untrue.

Average Americans, many of whom hold complicated views on the issue of abortion, may wonder why such a bill would even be necessary in the first place. Once a child is born, she becomes an independent human being who's entitled to the same rights and legal protections afforded to all citizens, right? Wrong, said State Senator Obama. Earlier this decade, the Born Alive Infant Protection Act was introduced in the Illinois state legislature after a Chicago area nurse named Jill Stanek blew the whistle on a practice she personally witnessed at her hospital. Babies who managed to survive late term abortions were being abandoned in soiled linen closets and left to die.

Republicans in Springfield crafted a bill to end the inhumane practice, bringing SB 1095 up for a vote in March 2001. Barack Obama was the lone legislator who rose to speak against the bill, arguing it contained two flaws. First, he said the act’s language could be construed by some to be an "anti-abortion statute." Evidently, the prospect of voting in favor of a bill that might possibly be perceived in some quarters as anti-abortion was unsettling for him. In advancing this point, he ignored the fact that the bill's wording was tight, specific, and unambiguous: The law only applied to fully born persons, rendering the abortion angle moot. Second, the University of Chicago law lecturer dipped into his vast reservoir of legal knowledge and concluded that the law—intended to protect human beings who survived abortions—could not, in fact, survive “constitutional scrutiny." Obama’s analysis proved to be incorrect. A few months after he voted against the state bill, Congress passed a virtually identical bill at the federal level without a single dissenting vote, and the law remains on the books today.

This brings us to the cover-up. A few years after casting that infamous vote, Obama found himself running for US Senate against a dead-end Republican candidate. Despite the near-certainty of his electoral success, Obama deemed it necessary to respond to a charge leveled against him by his hapless opponent, Alan Keyes. The Keyes campaign tried to highlight Obama's infanticide vote to demonstrate how out-of-step he was even with the deep blue values of Illinois. Barack Obama, version 2004, fired back, assuring voters that he of course opposed infanticide, and would surely have voted for the federal law had he been serving in the US Senate at the time it was passed. What made the federal bill so much better, he explained, was its inclusion of an additional clause that expressly (and redundantly) stated the law would have zero effect whatsoever on abortion policy or the legal status of the unborn. This language convinced the Senate's most reliable pro-abortion members to support the measure unanimously. Even NARAL gave it the green light, and Obama claimed he would have, too.

Setting aside the meaninglessness of Obama’s distinction between the state and federal bills, he seemed to believe this explanation would satisfy voters' concerns about the issue. The media swallowed his story without skepticism, thus discarding Obama's potential political problem in the proverbial linen closet. But truth has resilient streak, and years later, Obama's tale is unraveling.

The National Right to Life Committee last week uncovered documents proving that Obama's "I-totally-would've-supported-the-Senate-bill-because-I'm-a-moderate!" clarification is an outright falsehood. According to NRLC spokesman Douglas Johnson, the records "prove that in 2003, Barack Obama, as chairman of an Illinois state Senate committee, voted down a bill to protect live-born survivors of abortion — even after the panel had amended the bill to contain verbatim language, copied from a federal bill passed by Congress without objection in 2002, explicitly foreclosing any impact on abortion."

The special Roe-neutral language that he claimed made the federal statute acceptable was, in fact, included — word for word — in a 2003 state bill he personally killed in committee.

So a politician distorted one of his past votes. What’s the big deal? In addition to further eroding Obama’s self-proclaimed status as a new kind of politician, this episode sheds more light on the radical underbelly of Obama’s agenda. National Review’s David Freddoso has written an excellent new book, The Case Against Barack Obama, in which he calls his subject a “stealth liberal,” and says Obama’s role as a bipartisan reformer amounts to little more than audacious rhetoric. The infanticide vote could be Exhibit A in building both cases.

Americans must ask themselves why Barack Obama really opposed this legislation. It’s already been established that his standard explanation isn’t the truth, so what’s the genuine reason? One possible answer is that Obama’s commitment to legalized abortion runs so deep that he believes the Constitution guarantees that “right,” even if the initial abortion procedure fails. Put crudely, once a woman chooses to abort, she’s entitled to a dead baby. That position is so far out of the mainstream, it’s no wonder Obama may have decided to use misdirection and deception to explain away his vote.

Another possibility is that Obama’s a hyper-partisan ideologue. The driving forces behind the Born Alive Infant Protection Act were pro-life groups that generally support Republicans. Perhaps Obama’s fierce partisanship and leftist ideology were simply too strong for him to stomach handing any conservative group a political victory. If this is the case, his vote was petty and appallingly callous. It also would entirely undermine the overarching message of his famous 2004 DNC speech in which he decried blue vs. red state polarization and embraced America in with a big, royal purple hug of bipartisanship and inclusion. The great Emperor of Unity would have no clothes.

Whether it was Obama’s radical policy preferences, blind partisanship, or some combination of the two that motivated his vote is unclear. Although it’s offensive that Obama spun false excuses to try to justify his vote, what ultimately matters most is that he voted ‘no’ on a bill that simply stated killing a living, breathing baby is not acceptable. That vote, in and of itself, is far worse than any political cover-up could ever be.