After 2,000 Years the Message Still Cannot Be Silenced

Gregory Rummo
|
Posted: Dec 25, 2021 12:01 AM
Share   Tweet
The opinions expressed by columnists are their own and do not necessarily represent the views of Townhall.com. 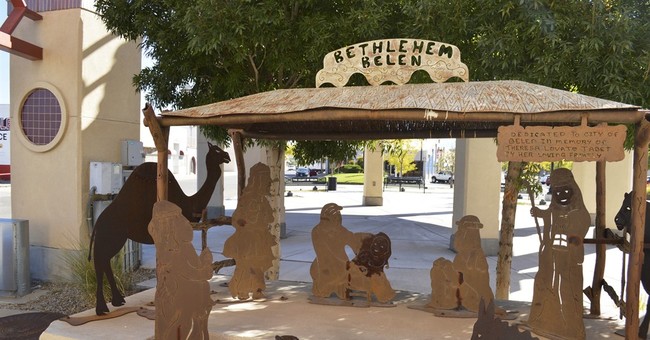 Good vs, evil, moral failure followed by redemption, forgiveness, unconditional love, sacrifice, equality, free will, liberty; these are concepts deeply ingrained in the human spirit regardless of a person’s religious beliefs.

They are the themes of great novels and movies. Civilizations have been established on their principles—“We hold these Truths to be self-evident, that all Men are created equal, that they are endowed by their Creator with certain unalienable Rights, that among these are Life, Liberty, the Pursuit of Happiness...”

These are not concepts that evolved on their own, millennia after we supposedly crawled out of the primordial soup. They are what set us apart from the animals, what negate the law of the jungle, turning Neo-Darwinism’s "survival of the fittest” on its head.

It is the Imago Dei.

Man has the image of God stamped on his soul. “Then God said, ‘Let us make man in our image, in our likeness,’ (Genesis 1:26 - NIV). And then God breathed a spirit into the first man, Adam.

To deny the existence of human spirituality—the Imago Dei—or to equate it with some medieval myth or a pernicious “God delusion” is absurd. It is akin to denying that humans have two eyes or two legs or the capacity to reason and to think creatively.

Yet this is the stretch that atheists have to make in order to deny the truth of what we celebrate this month—the birth of Jesus Christ, the God-man, the long-awaited Messiah.

Their denial is instructive. Not content to ignore the message of Christmas it rears its ugly head in annual battles over Nativity displays and similar Christian-phobic tantrums. This betrays a deep-seated insecurity in their own belief system. And in attempts to quell this insecurity—what is in reality the faint echo of Eden nagging at their consciences—they lash out to silence the message as well as the messengers.

Joni Mitchel may have written that “we are stardust,” quoting Carl Sagan, and we are “billion year-old carbon,” but even she could not escape the realization that “we have to get ourselves back to the garden.”

Satan tried to silence the message and The Messenger in another garden—Gethsemane. Herod tried in Bethlehem when he ordered the slaughter of the innocents. The Romans and the Jews tried it on that dark day when the Son of God hung on a cross between Earth and Heaven.

“It is finished,” Jesus cried and all thought they had finally succeeded. But three days later, an empty tomb proved them wrong and changed history forever.

“For unto you is born this day in the city of David a Savior, which is Christ the Lord.”