Gil Gutknecht
|
Posted: Jan 05, 2020 12:01 AM
Share   Tweet
The opinions expressed by columnists are their own and do not necessarily represent the views of Townhall.com. 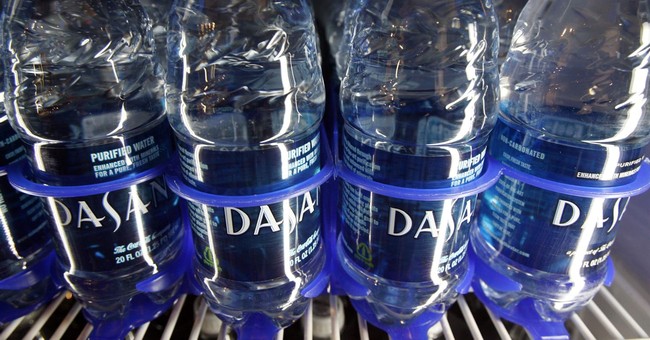 Recorded in 1934 by the Sons of the Pioneer, it is nearly impossible to listen to the song without getting thirsty. It’s a western classic.

“Old Dan and I with throats burned dry, and souls that cry for water.
"Cool…clear…water.”

You can almost see the two cowboys riding across the burning sands, searching for water. Fresh water is something we Americans take for granted, until the well runs dry.

Learning from the Romans, our engineers have built elaborate systems to ensure that when we turn the tap, we get as much clean fresh water as we want. Great cities often get their drinking water piped in from hundreds of miles away. Since the Pharmaceutical Companies haven’t gained control of our water systems (yet) it’s still cheap.

Early societies recognized the critical nature of potable water, settling around springs and clear streams. Human beings can live longer without food than we can without water. We Americans use lots of water. A study done at George Washington University concluded that each one of us uses 450,000 gallons of fresh water every year!

Fortunately, we have rivers and aquifers that provide us with fresh water. However, like all living organisms we create waste. A large portion of those thousands of gallons of water we use gets flushed. Included in that waste are things that aren’t easily removed by our wastewater treatment plants. One of those things is phosphorous. Although only a small amount of phosphorous is removed, the wastewater is released back into our freshwater system.

I became interested in this issue years ago while serving on both the Ag and Science Committees. As a disclaimer, I’m now part of a start-up group that is marketing a new technology that cost-effectively pulls phosphorous out of water.

It’s kind of a big deal. Nearly all water experts agree that excess phosphorous in our fresh water is the largest cause of potentially poisonous algae blooms and what is called eutrophication. You regularly see examples of this. From Florida waterways plugged with green slime to dying lakes and ponds, phosphorous is literally killing our freshwater systems. And remember, fresh water is a finite resource.

A few facts. First, phosphorous is an element. It doesn’t break down. It doesn’t go away. Second, it is necessary for virtually every life form. Living organisms tend to accumulate it. Third, we Americans use tons of it. Every year, we mine about 50 million metric tons of phosphorous. Almost all of it is spread on fields as fertilizer. It takes a pound of phosphorous to grow a bushel of corn. Some of it leaches into ground water, but most of it is drawn up into the crops. Those crops are fed to animals. We consume those plants and animals. We excrete much of that 50 million metric tons through our sewage system. Current technology doesn’t remove much of that excess phosphorous. It goes into our fresh water system. And since it is an element, every year it accumulates and the problem gets worse.

It would be easy to blame our farmers. In reality, we are all part of this growing problem.

We spend billions studying Global Warming/Climate Change. Evidence that much of this so-called change is caused by, or can actually be solved by humans, is sketchy. There is overwhelming evidence that degradation of our fresh water is caused by human activity. We cause it. We can fix it as well. It is a serious problem here. It’s approaching a crisis in places like China and India.

Yet, little is being done about it.

Our EPA has set strict standards on the levels of phosphorous that can be released into our rivers and lakes. The frustration is that they simply don’t enforce them. Since the standards aren’t enforced, municipalities are under little pressure to look for solutions. So the problem gets worse.

Clean water is not a partisan issue. To paraphrase President Kennedy, we all inhabit this same small planet. We all breath the same air and we all drink from the same well. It is critical for us to protect that well so that we can all continue to enjoy cool, clear water.