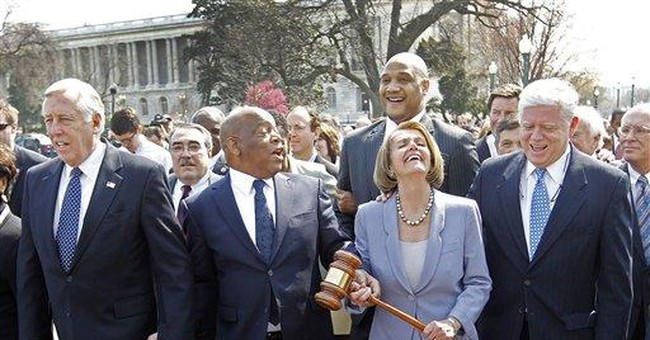 "And everybody praised the Duke,
Who this great fight did win."
"But what good came of it at last?"
Quoth little Peterkin.
"Why that I cannot tell," said he,
"But 'twas a famous victory."
-- Robert Southey
"The Battle of Blenheim"

WASHINGTON -- Barack Obama hopes his famous health care victory will mark him as a transformative president. History, however, may judge it to have been his missed opportunity to be one.

Health care will not be seriously revisited for at least a generation, so the system's costliest defect -- untaxed employer-provided insurance, which entangles a high-inflation commodity, health care, with the wage system -- remains. Obama could not challenge this without adopting measures -- e.g., tax credits for individuals, enabling them to shop for their own insurance -- that empower individuals and therefore conflict with his party's agenda of spreading dependency.

On Sunday, as will happen every day for two decades, another 10,000 baby boomers became eligible for Social Security and Medicare. And Congress moved closer to piling a huge new middle-class entitlement onto the rickety structure of America's Ponzi welfare state. Congress has a one-word response to the demographic deluge and the scores of trillions of dollars of unfunded liabilities: "More."

There will be subsidized health insurance for families of four earning up to $88,200 a year, a ceiling certain to be raised, repeatedly. The accounting legerdemain spun to make this seem affordable -- e.g., cuts (to Medicare) and taxes (on high-value insurance plans) that will never happen -- is Enronesque.

As America's teetering tower of unkeepable promises grows, so does the weight of government, in taxes and mandates that limit investments and discourage job creation. America's dynamism, and hence upward social mobility, will slow, as the economy becomes what the party of government wants it to be -- increasingly dependent on government-created demand.

Promoting dependency is the Democratic Party's vocation. It knows that almost all entitlements are forever, and those that are not -- e.g., the lifetime eligibility for welfare, repealed in 1996 -- are not for the middle class. Democrats believe, plausibly, that middle-class entitlements are instantly addictive and, because there is no known detoxification, that class, when facing future choices between trimming entitlements or increasing taxes, will choose the latter. The taxes will disproportionately burden high earners, thereby tightening the noose of society's dependency on government for investments and job-creation.

Politics in a democracy is transactional: Politicians seek votes by promising to do things for voters, who seek promises in exchange for their votes. Because logrolling is how legislative coalitions are cobbled together in a continental nation, the auction by which reluctant House Democrats were purchased has been disillusioning only to sentimentalists with illusions about society's stock of disinterestedness.

Besides, some of the transactions were almost gorgeous: Government policy having helped make water scarce in California's Central Valley, the party of expanding government secured two votes by increasing rations of the scarcity. Thus did one dependency lubricate legislation that establishes others.

The bill is a museum of hoary artifacts from liberalism's attic. The identity politics of quasi-quotas? The secretary of health and human services "in awarding grants and contracts under this section ... shall give preferences to entities that have a demonstrated record of ... training individuals who are from underrepresented minority groups or disadvantaged backgrounds." And the bill creates an Advisory Council on Green, High-Performing Public School Facilities, and grants for "retrofitting necessary to increase the energy efficiency and water efficiency of public school facilities."

The public will now think the health care system is what Democrats want it to be. Dissatisfaction with it will intensify because increasingly complex systems are increasingly annoying. And because Democrats promised the implausible -- prompt and noticeable improvements in the system. Forbidding insurance companies to deny coverage to persons because of pre-existing conditions, thereby making the risk pool more risky, will increase the cost of premiums. Public complaints will be smothered by more subsidies. So dependency will grow.

That was the name of the month in the French Revolutionary calendar in which Robespierre fell. To historians, Thermidor denotes any era of waning political ardor. Congressional Democrats will not soon be herded into other self-wounding votes -- e.g., for a cap-and-trade carbon rationing scheme as baroque as the health legislation. During the Democrats' health care monomania, the nation benefited from the benign neglect of the rest of their agenda. Now the nation may benefit from the exhaustion of their appetite for more political risk.