The Vacuity of Double Triumphs 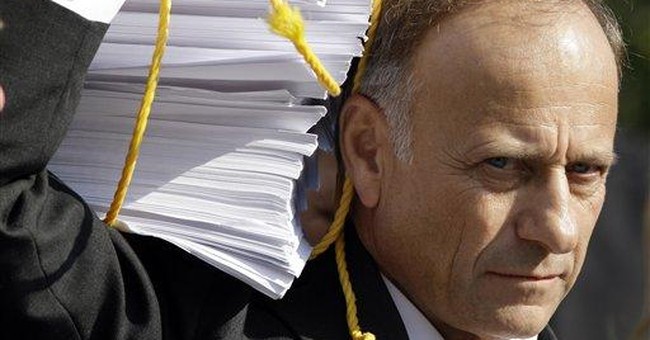 WASHINGTON -- It was serendipitous to have almost simultaneous climaxes in Copenhagen and Congress. The former's accomplishment was indiscernible, the latter's was unsightly.

It would have been unprecedented had the president not described the outcome of the Copenhagen climate change summit as "unprecedented," that being the most overworked word in his hardworking vocabulary of self-celebration. Actually, the mountain beneath the summit -- a mountain of manufactured hysteria, predictable cupidity, antic demagoguery and dubious science -- labored mightily and gave birth to a mouselet, a 12-paragraph document committing the signatories to ... make a list.

A list of the goals they have no serious intention of trying to meet. The document even dropped the words "as soon as possible" from its call for a binding agreement on emissions.

The 1992 Rio climate summit begat Kyoto. It, like Copenhagen, which Kyoto begat, was "saved," as Copenhagen was, by a last-minute American intervention (Vice President Al Gore's) that midwifed an agreement that most signatories evaded for 12 years. The Clinton-Gore administration never submitted Kyoto's accomplishment for ratification, the Senate having denounced its terms 95-0.

Copenhagen will beget Mexico City next November. Before then, Congress will give "the international community" other reasons to pout. Congress will refuse to burden the economy with cap-and-trade carbon-reduction requirements, and will spurn calls for sending billions in "climate reparations" to China and other countries. Representatives of those nations, when they did not have their hands out in Copenhagen grasping for America's wealth, clapped their hands in ovations for Hugo Chavez and other kleptocrats who denounced capitalism while clamoring for its fruits.

The New York Times reported from Copenhagen that Barack Obama "burst into a meeting of the Chinese, Indian and Brazilian leaders, according to senior administration officials. Mr. Obama said he did not want them negotiating in secret." Naughty them. Those three nations will be even less pliable in Mexico City.

At least the president got a health care bill through the Senate. But what problem does it "solve" (Obama's word)? Not that of the uninsured, 23 million of whom will remain in 2019. Not that of rising health care spending. This will rise faster over the next decade.

The legislation does solve the Democrats' "problem" of figuring out how to worsen the dependency culture and the entitlement mentality that grows with it. By 2016, families with annual incomes of $96,000 will get subsidized health insurance premiums.

Nebraska's Ben Nelson voted for the Senate bill after opposing both the Medicare cuts and taxes on high-value insurance plans -- the heart of the bill's financing. Arkansas' Blanche Lincoln, Indiana's Evan Bayh and Virginia's Jim Webb voted against one or the other. Yet they support the bill. They will need mental health care to cure their intellectual whiplash.

Before equating Harry Reid to Henry Clay, understand that buying 60 Senate votes is a process more protracted than difficult. Reid was buying the votes of senators whose understanding of the duties of representation does not rise above looting the nation for local benefits. And Reid had two advantages -- the spending, taxing and borrowing powers of the federal leviathan, and an almost gorgeous absence of scruples or principles. Principles are general rules, such as: Nebraska should not be exempt from burdens imposed on the other 49 states.

Principles have not, however, been entirely absent: Nebraska's Republican governor, Dave Heineman, and Republican senator, Mike Johanns, have honorably denounced Nebraska's exemption from expanded Medicaid costs. The exemption was one payment for Nelson's vote to impose the legislation on Nebraskans, 67 percent of whom oppose it.

Considering all the money and debasement of the rule of law required to purchase 60 votes, the bill the Senate passed might be the only bill that can get 60. The House, however, voted for Rep. Bart Stupak's provision preserving the ban on public funding of abortions. Nelson, an untalented negotiator, unnecessarily settled for much less. The House also supports a surtax on affluent Americans, and opposes the steep tax on some high-value health insurance. So to get the bill to the president's desk, the House, in conference with the Senate, may have to shrug and say: Oh, never mind.

During this long debate, the left has almost always yielded ground. Still, to swallow the Senate bill, the House will have to swallow its pride, if it has any. The conference report reconciling the House and Senate bills will reveal whether the House is reconciled to being second fiddle in a one-fiddle orchestra.

That Loudmouth Troublemaker Is An FBI Snitch
Townhall
AOC-endorsed Maya Wiley is doing her best to insult every Jewish voter in NYC ahead of Tuesday's primary election
Twitchy
Bill Maher Torches California for Its Heavy Regulation
Redstate
Is Pennsylvania on the Verge of a Forensic Election Audit?
PJ Media