Impressions of a First-Time Visitor to Israel

George Mano
|
Posted: Mar 08, 2016 12:01 AM
Share   Tweet
The opinions expressed by columnists are their own and do not necessarily represent the views of Townhall.com. 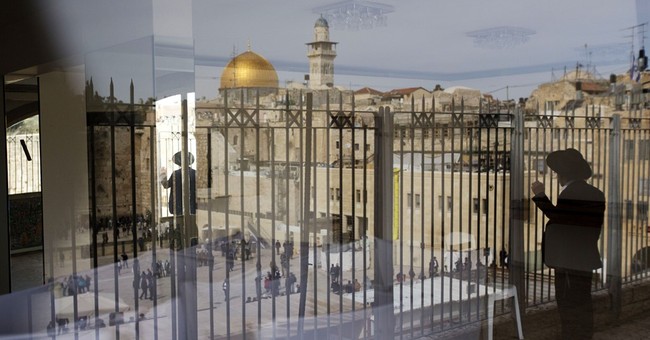 A few months back during the height of the “Knife Intifada,” Dennis Prager wrote a column for Townhall titled, “Why I am in Israel--and why you should be.”  The gist of the column was that the terrorists are trying to scare tourists away from Israel, so in order to keep the bad guys from winning, we should visit the Holy Land and show them we are not afraid.

I took Prager’s advice and went to Israel, and it was a good thing I did.  I enjoyed myself immensely.

What is Israel like?  The answer is: It depends on what part of the country you are talking about.

West Jerusalem looks like a Central European city.  Without the Hebrew writing on the shop signs and the numerous black-hat-black-coat-wearing Orthodox Jews walking by, a visitor might think he is in Frankfurt or Prague.  There are modern office buildings, clean streets, pedestrian zones, and street cars.  I drank one of the best cups of cappuccino I have ever had at a cafe in the city center.

But Jerusalem also has the historic Old Town, the place where Jesus walked and was crucified, the place where Solomon and David once held court.  There one finds the Via Dolorosa, the Church of the Holy Sepulcher, the Wailing Wall, and the Dome on the Rock.  These are places one hears about or reads about in books, but to see them in person, to stand in them or next to them, is an experience that cannot be described.

I met Christians and Jews from the U.S., Canada, and Great Britain visiting the holy sites.  I also made friends with some local people.  The Israelis I met were happy to give me directions or just chat and answer my questions about their country.

I took an excursion from Jerusalem, joining a bus tour to Jericho and Bethlehem.  Jericho, 250 meters below sea level and the oldest city on earth (10,000 years old) is an oasis in the desert, a stone’s throw away from the Jordan River.  The main attractions there are the archeological digs and the spring made famous in the Bible by the miracle of Elisha who turned its salty waters into freshwater by throwing a handful of salt at it.  Jericho is now a predominantly Palestinian city; the Israeli government has pulled out of it completely and Israeli citizens are warned not to enter.  As a foreigner, though, I saw no reason to worry about my safety.

Close to Jerusalem, but in the West Bank on the other side of the wall is Bethlehem, the birthplace of David and Jesus.  Two important Christian sites are found here and the city gets busloads of Christian tourists year-round, but especially in December.  It felt somewhat touristy, but I would have regretted it had I not gone there.

Leaving Jerusalem I took a bus up to Haifa on the north coast, a ride of about two hours.  The landscape one sees between those two cities is not what one expects; there are rolling fields covered with green meadows, plowed farm land, and rows of orchards.  Sometimes I thought I was in my home state of Indiana; other times it looked like California’s Central Valley.  The writer Leon Uris was right when he wrote that the Jews had turned the desert green.

The city of Haifa sits on the Mediterranean Sea and if it were in the south of France, it would be one of the world’s great tourist destinations—a prettier spot would be hard to find.  Besides the beautiful shoreline and the historic city of Akko to the north, the city boasts the magical Bahai Gardens, representing a kind of heaven on earth.  Haifa has a mixed population of Jews, Arab Christians, and Arab Muslims, and they all seem to get along.

From Haifa I took another bus over to Nazareth, the town where Jesus spent his childhood.  It is no longer a sleepy village with shepherds tending their sheep, but rather a bustling medium-sized city.  Still, it is not too large, and you can see the important Christian sites and be out of the city in half a day.

Sure, there were some things I did not like in Israel—prices are high and Israeli shopkeepers seem to act as though the customer is a nuisance, continuing to chat with friends while paying customers have to wait for them to finish the conversation—but I haven’t found a country yet that doesn’t have something I could complain about.  There is no reason to dwell on these small irritations anymore than there would be to dwell on the pickpockets in Rome or the rude waiters in Paris.

Some people have asked me if I was afraid in Israel.  The answer is 100% No.  Israel is a safe country, one of the safest I have ever been in.  Jerusalem is safer than London or Paris or Rome, and much safer than Chicago or Los Angeles.  The perception of danger comes from the news media, because when one of the Palestinians runs amok and kills someone—a rare incident, which might occur two or three times a year—it makes news all over the world.  By contrast, three people are killed every day by gunfire in gang-related crime in Chicago, yet no one outside of Chicago hears about it.

My advice is, if you have been thinking about visiting the Holy Land, you should go.  You will probably have one of the best experiences of your life.