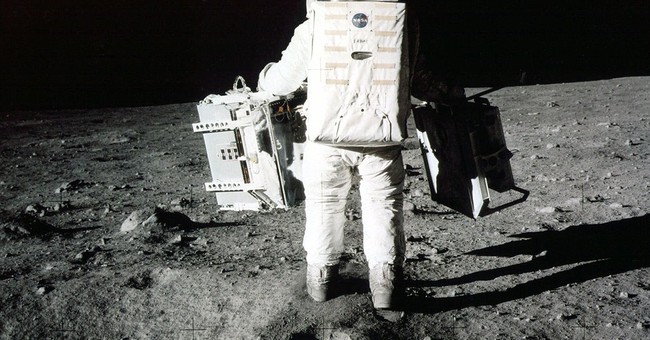 July 20, 2014, will mark the 45th anniversary of the Apollo 11 landing on the Moon, the first time humans had ever set foot on another part of the universe. Besides being a tremendous scientific achievement, it was also an important political statement, a battle victory for the US and the West over the Soviet Union and the Communists in the Cold War, a battle known as the Space Race.

During World War II the technological leaders in rocket science were the Germans. After the war, with the Cold War underway, the US and the USSR each tried to grab the best among the former Nazi scientists to put to work in their own budding space programs. That led to the humorous and possibly apocryphal comment, “Their Germans are better than our Germans,” when the Soviets launched the world's first artificial satellite in 1957, Sputnik 1. The Sputnik 1 launch, though, was no laughing matter. Its success gave everyone the impression that the Soviets had shot out ahead, so to speak, in technology.

Then came another big shock in 1961, when the USSR managed to beat the US in the race to put a man into space. It happened on April 12; Vostok 1 lifted off from the Baikonur Cosmodrome in Kazakhstan and carried Cosmonaut Yuri Gagarin out of our atmosphere. Not only did Gagarin make it into space, he also orbited the Earth for an hour and 48 minutes before touching back down. By contrast, almost a month later the American space program managed to get astronaut Alan Shepherd off the ground with a Mercury Redstone rocket, but his flight was only 15 minutes long and he did not orbit the earth.

President John F. Kennedy sensed the worries of most Americans and decided we needed to do something spectacular to regain our confidence. Landing on the Moon would fit the bill. So in September 1962, he delivered a speech at Rice University in Houston in which he set the goal of going to the moon “in this decade...because that goal will serve to organize and measure the best of our energies and skills.”

Kennedy’s proposal probably seemed ambitious even unrealistic at that date given the track record of America’s space program. Nonetheless, with public support NASA created the Apollo Program to reach the Moon. Unfortunately, it started out tragically. Three astronauts suffocated to death in a fire while testing Apollo 1 on the launch pad.

That was in January 1967. In other times, with a different America, they might have quit, or, at least, taken a long break. But, Americans at that time, many with fresh memories of World War II, were a hardier people and they did not quit or take a break. They learned from the Apollo 1 tragedy and kept going.

The following year at Christmastime, the three-man crew of Apollo 8, led by astronaut Frank Borman, flew a bold mission which took them out of earth’s orbit to an orbit around the moon and back to Earth. Besides the technological achievement of the distance involved, the flight was notable because the astronauts read from the Bible on Christmas Eve and because they transmitted a photo of the Earth rising above the lunar surface, the first time anyone had seen such a thing. Their Christmas Eve broadcast was the most watched TV program ever up until that time. With the success of Apollo 8, NASA was ready for the astronauts of Apollo 11 (Neil Armstrong, Buzz Aldrin, and Michael Collins) to attempt the first landing on the Moon. The plan was to have Armstrong and Aldrin land with the Lunar Module, while Collins orbited the Moon in the Command Module.

The tricky part was going to be getting the Lunar Module to take off from the surface of the Moon and dock with the Lunar Module later. Fortunately, everything went according to plan. On July 20, 1969, the Lunar Module touched down on the surface of the Moon. A few hours later, on July 21, Neil Armstrong opened the hatch and stepped out, becoming the first man to walk on the lunar surface. Six hundred million people on Earth may have watched as Neil Armstrong said: “That's one small step for a man, one giant leap for mankind.”

The Soviets were among those watching. NASA had achieved President Kennedy's goal of landing on the Moon before 1970. It showed what Americans could do, when we set our minds to accomplish something. We had won the Space Race.