Gabriella Hoffman
|
Posted: Apr 02, 2021 12:01 AM
Share   Tweet
The opinions expressed by columnists are their own and do not necessarily represent the views of Townhall.com. 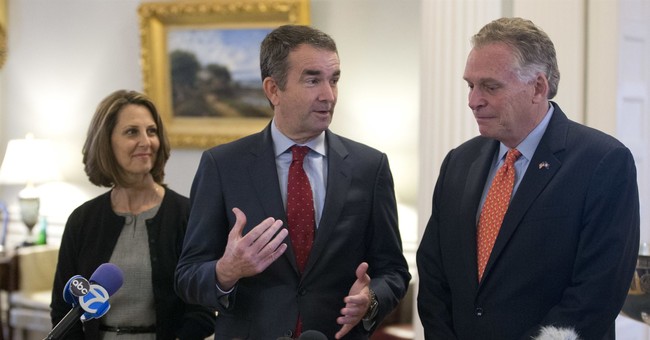 Something is rotten in Richmond.

Scandal has befallen the Virginia Parole Board, and it’s finally coming to light.

Recent investigations into the Parole Board—which operates in secret and conceals records from the public—reveal board members violated its rules granting parole to convicted killers serving life sentences. Worse, the five-member board—all Democrats—decided this without informing victims' families and state prosecutors beforehand.

Established in 1942, the agency decides how to “grant parole, to deny parole, to detain parole violators, and to revoke parole.” Unsurprisingly, they “serve at the pleasure of the Governor.” That governor, mind you, is Governor Ralph Northam (D-VA). Yes, that guy.

Why aren’t more Virginia Republicans, save for a few individuals, talking about this scandal? All GOP candidates running for statewide office should make this a campaign issue.

Democrat-Controlled Parole Board Riddled with Corruption

Last spring, the agency first drew criticism after approving the early release of Vincent Martin—a convicted cop killer who only served 40 years of his life sentence. The board did so without first alerting state prosecutors or victims’ families.

WNIS AM-790 radio host Kerry Doughtery detailed Martin’s case on her blog last April, writing, “The most notorious criminal to be approved for parole was cop killer Vincent Martin, who ambushed Richmond Patrolman Michael Connors, 23, during a routine traffic stop in 1979.”

Parole in Virginia, Doughtery noted, was abolished in 1995 "as a part of then-Gov. George Allen’s Truth in Sentencing initiative. The law requires that a felon serve at least 85 percent of his or her sentence before being considered for parole."

In August, Republicans demanded the entire board resign for violating “its own procedures during the parole process” following this decision. Unsurprisingly, they refused.

However, Martin wasn’t the only convicted killer released on parole.

The Office of the Inspector General (OIG) found repeated violations of “law and policy in at least eight other parole decisions involving convicted killers.” The Richmond Times-Dispatch reported:

The nine cases show a pattern of violations that center on releasing inmates without first giving proper notice to state prosecutors or to victims’ family members, who are allowed to provide input on the impact a release may have on them or the community before the inmates are granted parole, according to reports by the Office of the State Inspector General that were obtained by the Richmond Times-Dispatch.

The Inspector General’s findings implicate former Virginia Parole Board chair Adrianne Bennett and other board members for wrongdoing.

Bennett was appointed to the board in January 2017 by former Governor Terry McAuliffe (who’s currently seeking a second term). She resigned from the board last April. The former chair now serves as a judge on the Virginia Beach Juvenile and Domestic Relations District Court.

"When Terry McAuliffe appointed Bennett to the Parole Board, he told her to speed up the early release of prisoners,” Kirk said in an email to Town Hall. “In the process, she violated the law to grant violent criminals an early release and also improperly released over one hundred parolees from supervision. McAuliffe's appointment of Bennett led to a dereliction of duty at the Parole Board, and now violent criminals are back on the streets.”

Punishment for Whistleblowers, Not Perpetrators

Jennifer A. Moschetti, former senior investigator in the Office of the State Inspector, was revealed to be the lead person behind the “unseen draft report into the parole of Vincent Martin”—blowing a lid on the Parole Board’s misconduct.

After a brief suspension, Moschetti was later fired by her boss, state Inspector General Michael Westfall, on March 22nd. Why? She filed a whistleblower lawsuit alleging misconduct in the investigation into the Parole Board.

Moschetti also claims she and Westfall were “interrogated” by members of Gov. Ralph Northam’s administration after a redacted report into the parole board’s handling of Vincent Martin’s case was leaked.

The lawsuit asserts the meeting with Clark Mercer, Northam’s chief of staff, and Brian Moran, Virginia’s secretary of public safety and homeland security, was meant to “intimidate” the inspector general and investigators for the state’s watchdog agency.

The proposal, unveiled in a budget amendment, reportedly would cost $250,000. It’s expected to be heard on April 7th when the General Assembly reconvenes.

“This hollow shell of an investigation is nothing more than an effort to secure a partisan whitewash of a scandal,” Obenshain said.

Another Republican state senator suggested this was akin to “asking for the fox to investigate the hen house.”

Washington Post columnist Norman Leahy wrote, “Pressing the governor and Democratic legislative leaders for on-the-record specifics should be on the daily “to-do” list of every GOP statewide candidate. It’s what a responsible and effective opposition party does.”

Leahy, in this case, is right.

If the Virginia Parole Board scandal doesn’t bring down Virginia Democrats, nothing will. Seize on this, Virginia Republicans, if you’re serious about flipping the Governor’s Mansion in November.