Gabriella Hoffman
|
Posted: Jul 24, 2020 12:01 AM
Share   Tweet
The opinions expressed by columnists are their own and do not necessarily represent the views of Townhall.com. 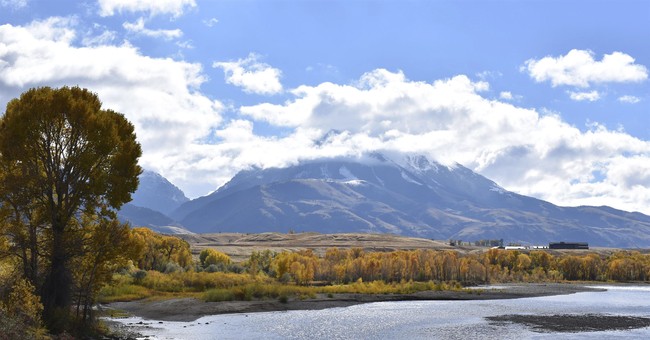 In our deeply-divided country, it’s rare for Congress to come together. One bill that put a momentary pause on the gridlock is the Great American Outdoors Act (GAOA), the bipartisan conservation bill heading to President Donald J. Trump’s desk.

Last month, the Senate passed their version by a 73-25 vote. The House of Representatives, after much delay, overwhelmingly passed it by a 310-107 vote on Wednesday. President Trump is expected to sign it by August 1, 2020.

There are two key takeaways from the GAOA: it will permanently fund the Land and Water Conservation Fund (LWCF) with $900 million annually in full funding and will create the National Parks and Public Land Legacy Restoration Fund.

The former will do the following:

“For FY2021-FY2025, there shall be deposited into the fund an amount equal to 50 percent of all federal revenues from the development of oil, gas, coal, or alternative or renewable energy on federal lands and waters. Deposited amounts must not exceed $1.9 billion for any fiscal year.”

The latter fund will address the $20 billion in deferred maintenance project backlog on federal lands under the purviews of the National Park Service (which boasts a $12 billion backlog), Bureau of Land Management, U.S. Fish and Wildlife Service, Forest Service and Bureau of Indian Education.

The bill is also expected to create about 100,000 new jobs in related industries.

Despite initially nixing LWCF funding from initial budget negotiations, President Trump came around to supporting the GAOA with the help of Senators Cory Gardner (R-CO) and Steve Daines (R-MT).

The president tweeted on March 3: “I am calling on Congress to send me a Bill that fully and permanently funds the LWCF and restores our National Parks. When I sign it into law, it will be HISTORIC for our beautiful public lands. ALL thanks to @SenCoryGardner and @SteveDaines, two GREAT Conservative Leaders!”

Some allege Gardner and Daines, key sponsors of the Senate bill, were insincere in their advocacy because they are up for re-election this fall. The evidence actually shows the conservation-minded Republicans have consistently pushed conservation legislation and aren’t motivated by political expediency.

Sportsmen organizations and conservation groups lauded the passage of the GAOA.

“As conservationists, it is our duty to take care of the land we already own. Our public lands have been neglected for too long, allowing for wastewater systems to fall into disrepair, historic buildings to deteriorate, and trails to be overgrown,” said Brian Yablonski, CEO of the Property and Environment Research Center (PERC). “The Great American Outdoors Act is long overdue and will help us fulfill our duty as conservationists by restoring what’s great about our great American outdoors and ensuring ‘America’s best idea’ is no longer just an afterthought.”

"After years of work, we are excited that the Great American Outdoors Act will now become law with the President's signature. This is a historic victory for sportsmen and women," said Jeff Crane, president of the Congressional Sportsmen Foundation. "This legislation will advance conservation, increase access for hunters and anglers, provide much-needed support for public lands and waters, and boost the already formidable sporting-conservation economy. CSF extends our sincere thanks to the House and Senate Congressional Sportsmen's Caucus (CSC) members that championed and voted to support these priorities."

“The Rocky Mountain Elk Foundation commends House membership for standing in support of conservation," said Kyle Weaver, Rocky Mountain Elk Foundation (RMEF) president and CEO. "This measure provides permanent and dedicated funding for the Land and Water Conservation Fund which ensures public access to outdoor recreation resources. It also provides money to federal, state and local government entities to purchase land, water and wetlands as a benefit for wildlife and all Americans, as well as much-needed resources to address maintenance and infrastructure issues on federal lands."

“The outdoor recreation industry is ready to usher in the next golden age of the outdoor experiences after the House passed, in bipartisan fashion, the Great American Outdoors Act,” said Jessica Wahl, executive director of Outdoor Recreation Roundtable. “GAOA is a major 21st-century achievement and a reminder that when all sides work together, we can accomplish great things for the outdoors and the nation.”

“This will be a great example of a promise kept by the Trump Administration for America’s sportsmen and women,” said Lawrence G. Keane, NSSF Senior Vice President of Government Relations and Public Affairs and General Counsel. “Secretary David Bernhardt and U.S. Fish and Wildlife Service Director Aurelia Skipwith recognize that our nation’s public lands belong to all Americans, and the Trump Administration delivered on the guarantee that those lands and waters are accessible to America’s conservation-minded hunters and recreational target shooters. Those men and women are the greatest stewards of our natural resources, and this initiative to expand and open new opportunities will nurture the next generation to enjoy and preserve our national outdoor heritage.”

For an alleged hater of public lands, destroyer of the environment and spoiler of natural resources, President Trump is eager to lend his name to the most consequential conservation bill this century. Conservationists, detractors or not, should welcome this move.

Thanks for putting aside partisan differences, Congress and President Trump. It’s important to safeguard our precious outdoor spaces for recreational and sporting activities for generations to come.