Dems Giving Support to Yet Another Union Bailout 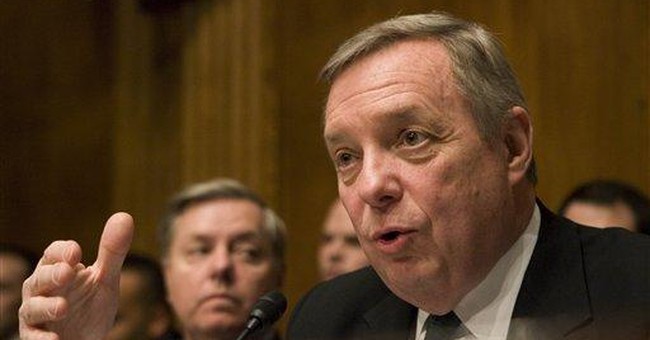 Editors' note: This piece is co-authored by Ivan Osorio.

The so-called Create Jobs and Save Benefits Act of 2010, introduced by Sen. Robert Casey (D-Pa.), got a huge boost when Senate Majority Whip Dick Durbin (D-Ill.) signed on a as a cosponsor, just before Congress’ August Recess. With the support of such a high-ranking member of the Senate Democratic leadership, Casey’s bill threatens to gain momentum. That would be very bad news. Casey’s bill is a micro-targeted bailout for underfunded union pensions that could cost taxpayers billions.

The bill would create a special fund in the Pension Benefit Guarantee Corporation (PBGC), an agency chartered by Congress that insured private sector pensions. PBGC is funded through premiums paid by private companies to insure retirees if a plan sponsor were to become insolvent. Casey’s bill would direct taxpayer dollars to shore up some underfunded union pension plans. The use of public funds to insure private pension plans is a first for PBGC and stark departure from the way it has operated since its creation in 1974.

Casey’s bill would create a new fund to the PBGC called the “fifth” fund. The legislation states that the new fund’s obligations would be “obligations of the United States.” In other words, taxpayers, not just by PBGC premium payers, would be on the hook. Money in the “fifth” fund would go to “orphans”—employees whose employers have stopped contributing to their plan—of certain existing pensions.

Phyllis Borzi, the Assistant Secretary of Labor for the agency in charge of pension plans, acknowledged in testimony to the Senate Committee on Health, Education, Labor and Pensions that Casey’s legislation “ultimately makes the taxpayers liable for paying the benefits of [particular union pension] plan[s]. Currently, no other benefit obligations assumed by PBGC are subject to the full faith and credit of the U.S. government.”

Borzi, who was nominated by President Obama, is skeptical that the legislation will fix the current situation. She commented that the root of the problem is a sharp decline in the number of new employers joining union pension plans and a dramatic drop in the ratio of employees to retirees. She stated that, “these larger problems facing plan’s troubled industries won’t be solved by the kind of short term temporary funding relief Congress is currently working on.”

Indeed, union pension plans have been in trouble for years and the latest economic downturn has only exacerbated the problem. In 2008, the Department of Labor listed 230 union plans as being either endangered—less than 80 percent funded—or critical—less than 65 percent funded. A year later, that number had skyrocketed to 640. In 2009, Moody’s Investors Service estimated union pensions to be underfunded by $165 billion dollars.

Worse, Casey’s bill would also bail out a dysfunctional agency. The PBGC’s premiums are set by Congress, not the market. As a result, years of too-low premiums, combined with the moral hazard that creates for companies under Chapter 11 to shunt off their pension obligations to the agency, have left the PBGC with severe deficits of its own. The PBGC faces a deficit of $22 billion, which is projected to go as high as $34 billion by 2019, according to its own 2010 annual management report. Taxpayers could also be on the hook for this deficit. A provision in the “fifth fund” allows it to transfer money to others funds in the PBGC, which could use that money to reduce its deficit.

Estimates on the bill’s cost vary widely. Sen. Casey very conservatively predicts the bill will cost $8 to $10 billion. News outlets such as the Wall Street Journal, Washington Examiner, and Fox Business estimate the bill could cost as much as $165 billion.

One likely early beneficiary of the bill would the Teamsters union, for which “pension reform” is a top legislative priority. The Teamsters’ Central States Pension Fund has been terribly underfunded for years. In 2007—before the financial crisis—it had only 47 cents on every dollar owed. Today, it is likely much worse due to the economic downturn. In fact, that same year, UPS found it less costly to pay $6.1 billion to withdraw from the fund than to continue paying into it. According to the Department of Labor, 11 Teamsters pension plans are in critical status and eight are endangered.

Why the sudden urgency? The Wall Street Journal summed it up well in a Monday editorial: “If Democrats could shift orphan company pensions to the taxpayer, the liabilities for the remaining companies would fall dramatically, and the multi-employer scheme could continue. Unions and employers could keep promising current workers fabulous pay and benefits, without which they have little chance of stemming their continuing decline in membership.”

Taxpayer watchdog groups have been sounding the alarm on the Casey bill and a similar bill in the House of Representatives, introduced by Rep. Earl Pomeroy (D-N.D.), bills for months. In May, 50 free market and taxpayer organizations co-signed a letter urging congress to “oppose legislation which provides the framework for a taxpayer funded bailout for failing pension plans.” The Casey Bill has been slow to gain traction, but now, with the second highest ranking Democrat in the Senate backing it, that all could change. When Congress returns from recess, a new bailout battle is likely on Capitol Hill.

Ivan Osorio is editorial director and a labor policy analyst at the Competitive Enterprise Institute.