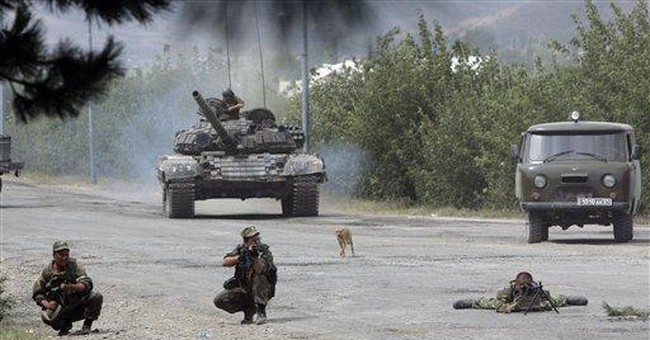 My mind goes back to August 2002 in Tbilisi, as I visited Georgia with John McCain. I remember it feeling rather dark and secretive, with the former-Soviet Union’s heavy hand still making its presence felt. President Eduard Shevardnadze, formerly Soviet minister of foreign affairs, presented a friendlier face to the United States, but was beset by economic problems and corruption charges. At the time I did not fully appreciate the power of the democratic impulses that were just beginning to bubble up and would lead to the democratic Georgian government we now see threatened.

What has happened in Georgia since that time should not be surprising to anyone. Certainly Russia has tried to pretty itself up: it renamed the KGB and even gave its 21st century strongman Vladimir Putin a new title.

But for some time we’ve seen Russia sliding back to its authoritarian comfort zone. Murder, imprisonment and property confiscation are back in vogue for any perceived troublemaker. Former Soviet provinces have faced all forms of intimidation, from thuggish trade shakedowns to cyber attacks that shut down communications with the outside world. And whether a former satellite like Poland or a longtime western ally like Germany, Russia has made overt threats over plans to bring eastern European countries into NATO or to deploy a U.S.-provided missile defense system.

Russia is not above using anything at its disposal to make its point. It is a wealthy nation, built on a petro-economy that provides oil and gas to dependent European nations, which are petrified of having their energy supplies disrupted and are now in their own economic doldrums.

Given all this, Russia’s incursion into Georgia is a logical extension of Putin’s autocratic words and deeds and Russia’s regional ambitions, which must be leaving those nations closest to Russia’s borders – the Baltic states and Ukraine – nervous about a bitter and uneasy winter.

All the while, in Eastern Europe some of America’s staunchest friends are watching to see what the reaction of the U.S. and the west will be to Russia’s latest gambit. The U.S. and others use the word “unacceptable,” undoubtedly with the same effect that we get when we use it with the Iranians. So do we threaten Russia with denial of the membership in the World Trade Organization that it so covets? Do we expedite Georgia and the Ukraine’s entry into NATO? Do we cut off the tens of millions that we send into Russia to – hopefully – provide for security of nuclear materials? Everything should be on the table.

But the one thing we must not do is allow Russia to feel it can get away with, let alone feel rewarded for, this invasion of a sovereign democratic nation that has also loyally supported coalition efforts in Iraq.

While this crisis plays out we should also note that these events give evidence of a larger reality: the next American President is going to face an international landscape that is more difficult and treacherous than we have ever faced. By now most Americans appreciate the dangers of international terrorism and the fact that a small number of people can wreck unimaginable havoc upon our country and our people if they get their hands on the right kinds of weaponry. What is less understood is that some of the older, traditional kinds of threats are still very much with us, only heightened because of the increasing availability of nuclear weapons and other weapon technologies.

Who wasn’t impressed by the sea of Chinese performers, smiling and perfectly synchronized at the opening ceremony of the summer Olympics, demonstrating to the world their discipline and “organizational skills”? Or their ability to present to TV viewers beautiful fireworks displays that don’t really exist? What isn’t an illusion is that China is engaged in a rapid military buildup, the extent of which we do not know. With hundreds of missiles pointed toward Taiwan, experts say China is developing the capability to take Taiwan before the U. S. has the ability to respond.

Pakistan and India are still belligerently staring each other down over Kashmir. Both countries, of course, have nuclear arsenals, and Pakistan is of questionable stability with a segment of its intelligence community supportive of the Taliban.

As Iraq stabilizes and our role there is reduced, there will continue to be a major debate within the United States as to how we deal with this increasingly dangerous world of new threats as well as old ones. Our military is stretched thin and worn down and it is clear to anyone who takes the time to study the matter that we cannot get by with the expenditure of 4% of our GDP on our military. The threats to our country are going to require a much more dedicated response. To what extent should we fill the role that we have filled pretty much since the end of World War II as the No. 1 friend of democracy and provider of stability in the world? How much in the way of resources are we going to be willing to devote to this endeavor?

The isolationist tendencies of the Democrats are not limited to trade agreements. Many are tired of the war in Iraq and will want to use any “peace dividend” on domestic purposes as future demands of our entitlement programs become more and more apparent.

Little help can be expected from our friends in Europe no matter how much it appears that their own interests are at stake. European countries spend even less of their GDP on their own defense than we do. They continue to trade with Iran, refusing to impose tough sanctions as Iran develops its nuclear capabilities. These are the weak reeds on which many would have us lean in our effort to fight global terrorism and the authoritarianism that threatens democratic countries.

So let’s recap: international terrorism; powerful nation states on a quest for hegemony, whether close to home or further afield and with a willingness to squelch freedom anytime the opportunity arises; less stable and no less dangerous countries with nuclear and ballistic missile capabilities; an alliance of democratic nations of questionable resolve and a debate at home over our future role in the world with a political party happy to create the impression of diminished resolve with little concern for the long term damage such an impression may cause.

Under these circumstances the old title “leader of the free world” takes on renewed meaning. He will have to guide the body politic at home toward resolution and in all likelihood engender resolve in a new alliance of democratic nations to deal with this broad array of challenges. In short it will require someone with experience and the courage to put his nation’s long term interest above his own.

I suppose it’s obvious where I’m going with this. This is no time to elect a president whose international experience is limited to speaking to adoring European crowds who want to see the United States retreat from the world … until they require our help in the next crisis that threatens them.

It has been instructive for the country to see the candidates’ reaction to the equivalent of Hillary Clinton’s 3 a.m. phone call. While he was vacationing in Hawaii, Barack Obama’s advisors scrambled into action and initially came up with the expected liberal bromides which equated the actions of Russia and Georgia and only ratcheted up the rhetoric when they began to actually understand what was happening.

It wasn’t that difficult for John McCain. For him Georgia was another little-known part of the world, whose leaders and history he is familiar with. And long before this Georgian crisis, he’s had the correct read on Russia, just as he’s had the right read on what we needed to do in Iraq. .

This crisis half a world away confirms what I’ve been saying for a while: This election cycle, the traffic in the world is very heavy …and dangerous; it’s no time to give a kid with barely a learner’s permit the keys to the car.