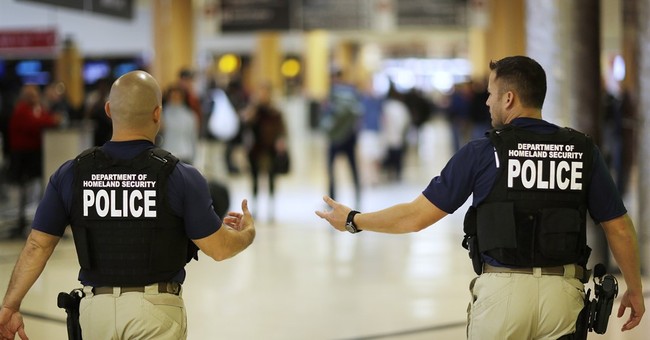 Donald Trump would temporarily ban Muslim immigration to the U.S while Hillary Clinton tells us “love and kindness,” is part of the solution for confronting terrorism. Somewhere in between these extremes is a Maryland Congressman who maintains the federal government somehow has the ability to open the floodgates on Syrian immigration while improving terrorist screening at the same time.

Rep. John Delaney believes international and domestic bureaucracies can distinguish among refugees from war-torn Syria and ISIS members seeking to enter the U.S. while lifting a cap that he calls “arbitrary” and collapsing a two-year vetting process that he deems too lengthy. The current process for determining refugee status involves multiple agencies where the United Nations performs an initial assessment of applications. From there, U.S. intelligence agencies and the Departments of Homeland Security and State and the FBI conduct background checks attempting to weed out security risks.

Why does the Congressman propose this alphabet soup of government departments and agencies can increase the quantity and quality of these reviews and ensure his voters there will be no national security breaches? Delaney is calling big government to the rescue for a politically-difficult Congressional vote.

It all started November 19 when Delaney voted with Republicans on the “Safe Act” that would require top law enforcement, security and intelligence officials to vouch for robust screening of Syrian immigrants claiming refugee status. As the only Maryland House Democrat to vote in favor of the bill, he was caught flat footed days later, when liberal local elected officials in the district pleaded with federal officials to welcome more Syrians.

The Montgomery County Executive and all nine of its council members, in a November 24 letter to federal government officials, said, "We are confident that refugees will be appropriately screened." This is the moment when political considerations overrode any concerns the Congressman may have had about national security.

And that should not be a surprise because politics created this Congressional district. The 6th district was gerrymandered to remove a Republican incumbent allowing Delaney to win the seat in 2012. Therefore, the district encompasses extreme liberal voters in Washington’s suburb of Montgomery County, stretching northwest to far more conservative areas bordering rural West Virginia and Pennsylvania.

Delaney is attempting to appease the “love and kindness” wing of his Democrat base in the southern part of the district towards Washington D.C while appealing to security-minded Americans in the small towns that dot the I-270 and I-68 corridors heading to the state’s panhandle. Make no mistake. This is raw politics at its worse and is no different than Palestinian leader Yasser Arafat’s strategy decades ago of saying one thing in Arabic to one audience and something else in English to another. Such double-talk frustrated President Ronald Reagan to no end as part of the deception of Middle Eastern politics. It is even more of a concern when our own elected officials try similar tactics when our own security is at stake.

Following his vote on the Republican-led terrorist-screening vote, which passed the U.S. House, Delaney is essentially now advocating for an ill-defined type of rapid terrorist screening program that taxpayers will fund. In a December 3 press release and letter to Senate and House appropriations committees, Delaney says, “we encourage you to significantly increase funding for these critical programs to allow for more resources to be dedicated to more efficiently process refugee applications.”

And before that, he questioned the Obama Administration proposal to limit Syrian asylum seekers to 10,000, saying “we should not have an arbitrary cap.” Finally, he assures us, “we have the capabilities to speed up the process.”

The verbal gymnastics are clear to anyone paying attention such as Maryland bloggers picking up on the story, voters fed up with politicians and even a fellow GOP contender for the nomination, a former senior official in the Pentagon under Reagan. She put it succinctly by saying Delaney is wrong that providing security and speeding up refugee re-settlement are possible to do at the same time. As long-time Maryland blogger Joseph Steffen put it this month, the Congressman has a “burning desire to sit on the fence at all times.”

The Congressman should tell us how he will let untold thousands of Syrians in under an expedited time frame while ensuring ISIS terrorists do not succeed in disguising themselves as refugees to plot future attacks. Otherwise, Delaney’s contradictory positions are exposed as nothing more than a political stunt to appease a sprawling Congressional district with left-wing partisan opinions on immigration and national security.