The War With Iran 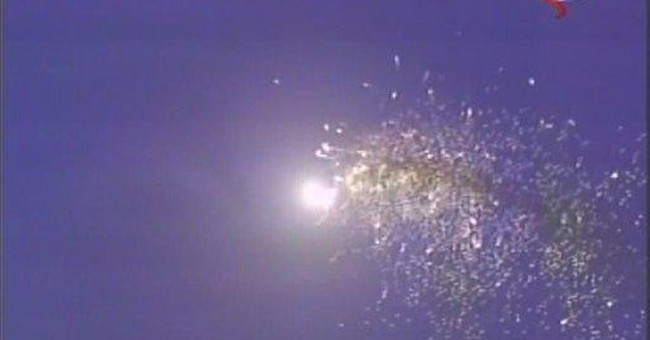 Last week’s Iranian missile tests prompted another round of fevered speculation that war might erupt between Iran and the United States. Largely lost in the frenzy is an unhappy fact: The Iranian mullahocracy has been at war with this country since it came to power in 1979.

The problem is that the weapons available to Tehran for prosecuting its jihad against “the Great Satan” are no longer simply truck bombs and suicide vests. Its proxy army, Hezbollah, has taken over Lebanon and operates terror cells from Iraq to Latin America and even inside the United States. With help from Communist China and Russia, its Iranian Revolutionary Guard Corps wields an array of anti-ship missiles, mines and go-fast boats capable of discouraging oil traffic from transiting the Straits of Hormuz – if not actually sealing that vital waterway for protracted periods.

Not least, Iran is now armed with ballistic missiles of ever-longer range. Those missiles have been developed with help from North Korea for the purpose of delivering the nuclear weapons the mullahs have been developing covertly for over 20 years. Once such weapons are in hand – perhaps just a matter of months now – Tehran will be in a position to execute its threat to wipe Israel (a.k.a. “the Little Satan”) off the map.

As a blue-ribbon commission told the House Armed Services Committee last Thursday, moreover, by launching its nuclear-armed ballistic missiles off a ship, the Iranian regime could soon be able to make good on another of its oft-stated pledges: To bring about “a world without America.”

The commissioners warned that, by detonating a sea-launched nuclear weapon in space over the United States, Iran could unleash an intense electromagnetic pulse (EMP) that would have a “catastrophic” effect on much of the Nation’s energy infrastructure. In short order, the ensuing lack of electricity would cause a devastating ripple effect on our telecommunications, sanitation and water, transportation, food and health care sectors and the Internet. Iranian missile tests suggest an emergent capability to execute such an attack.

If we are already at war with the Iranian regime and the destructive power of our enemy is about to increase exponentially, what can we do to about it? For various reasons, it remains undesirable to use our own military force against the mullahs if it can possibly be avoided. If that alternative is to be made unnecessary, however, five things must be done as a matter of the utmost urgency:

Three have to do with greatly intensifying the financial pressure on Tehran. First, we need to discourage investments in companies that provide the advanced technology and capital essential to the oil exports that underpin the Iranian economy. The campaign aimed at divesting such stocks from private and public pension fund portfolios and, instead, investing “terror-free” had a signal victory last week when the head of the French oil conglomerate Total announced that “Today, we would be taking too much political risk to invest in Iran.”

By moving billions of dollars into certified terror-free funds like those offered by the United Missouri Bank, U.S. investors can effect more of this sort of corporate behavior-modification. Senator Joseph Lieberman is expected shortly to introduce legislation that will offer federal employees a terror-free investment option in their Thrift Savings Plan. Every American should have such a ready choice – and be encouraged to exercise it.

Second, we need to deflate the price of oil that is sustaining the Iranian regime. We can do so by ending the monopoly oil-derived gasoline enjoys in the global transportation sector. (This imperative is the subject of a hilarious video by David and Jerry Zucker at www.NozzleRage.com.) By adopting an Open Fuel Standard, Congress can set a standard assuring that new cars sold both in America and the rest of the world will be capable of using alcohols that can be made practically anywhere (for example, ethanol, methanol or butanol), as well as gasoline. Long before vast numbers of such Flexible Fuel Vehicles are on the roads, the OPEC cartel-induced speculative bubble that has contributed to the recent run-up in the price per barrel of oil will be lanced.

Third, we must counter the effort being made by the Iranians and other Islamists to use so-called Shariah-Compliant Finance (SCF) as a means to wage “financial jihad” against us. Before SCF instruments proliferate further in our capital markets, in the process legitimating and helping to underwrite the repressive, anti-constitutional and subversive program the Iranian mullahs (among others) call Shariah, that program must be recognized for what it is – sedition – and prosecuted as such. The effect would be chilling for Iranian and other SCF transactions in Western markets world-wide.

Fourth, we need to deploy as quickly as possible effective anti-missile defenses – both in Europe and at sea. Russian objections notwithstanding, we cannot afford to delay any further in protecting ourselves and our allies against EMP and other missile-delivered threats.

Finally, we must mount an intensive, comprehensive and urgent effort to aid the Iranian people in liberating themselves from the theocrats that have afflicted their nation for nearly thirty years and made it a pariah internationally. Supplying information technologies, assistance to students, teachers, unionists and others willing to stand up to the regime, aid to restive minorities and covert operations should all be in play.

By adopting these measures, we may yet be able to bring about regime change in Iran – the only hope for avoiding full-fledged combat against the Islamic Republic there. But we should be under no illusion: We will not avoid war; it has been thrust upon us by the mullahs for many years now. We may, however, be able to avoid the far worse condition they wish to inflict by unleashing the weapons now coming into their arsenal.