To Not Arm Ukraine Is A Choice We Cannot Afford 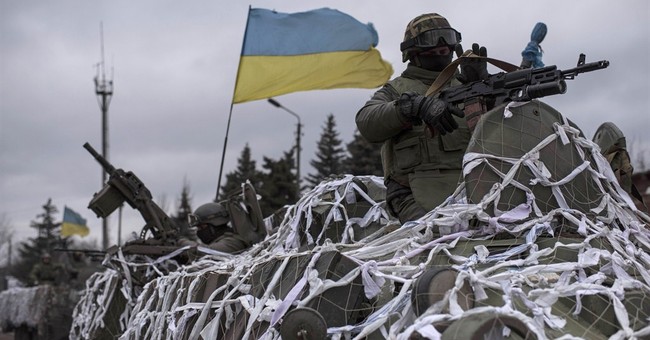 Knowing my background in Ukraine and with security issues regarding the Former Soviet Union, a colleague asked me if I had read Mr. Chapman’s TH piece on “Why We Shouldn’t Arm Ukraine.” I had not. After reading it, I found myself trying to understand the reasoning behind this mindset. In a nutshell, Mr. Chapman’s argument boils down to a handful of familiar anti-interventionist memes that have swirled around the increasing “not-our-fight” circles for years now. I will concede at the outset that the US has been on a war footing since 9/11. Americans have been understandably weary that our troops have been occupied with significant military actions in Iraq and Afghanistan for over a decade now. I understand and witness the implications of this every day. It’s not something lost in my calculus. This adds considerable pressure on the force and their families and naturally has reasonable people on either side of any “intervention” discussion consider the ramifications of American military action. However, the inescapable antithesis then must be equally considered; what is the cost of inaction?

I wrote an article at the behest of Townhall magazine just months after the illegal Russian annexation of Crimea that captures my analysis and presents steps the US and NATO could have taken (early on), and what the cost of continued indifference and placating Russian military adventurism may be. I encourage referencing it when seeking greater clarity and analysis on the issues leading to the fighting in Ukraine, its geo-strategic criticality, potential ramifications on Euro-Atlantic security, and what we, both as a member of NATO and unilaterally (could have) should do to address it. Newsflash- the Ukraine Crisis is like fish, not wine; is not going to get better with time.

1. American Military Intervention- “Because we have intervened so much in the recent past, we should not consider (any level of) intervention now”. Thank goodness we didn’t take that approach after the invasion of Poland, France, and Pearl Harbor, or leading to 9/11. The Nazis and Imperial Japanese forces, nor Al Qaeda, were no less a threat to world stability because of any intervention in conflicts preceding them. Crisis comes rarely at a time of our choosing; the enemy gets a vote, and in Ukraine presently, Putin is the Registrar of Voters.

2. No reason to send arms-they would do “no good.” – Having many contacts in Ukraine over the years, I can absolutely guarantee this is not the mindset of the Ukrainian military or its people; especially those remembering life under Soviet/Russian oppression. Jomini-like Order-of-Battle wisdom would clearly conclude Russian superiority by sheer numbers; APCs, troops, tactical aircraft, SPGs, etc. and that this is “Q.E.D.” that any introduction of arms into the conflict would be militarily feckless. Mr. Chapman may neither understand modern asymmetrical warfare nor the Ukrainian people. He may not be familiar with a Ukrainian resistance movement that severely battered and humiliated Soviet forces long after the cessation of WWII hostilities where Ukrainians killed 10,000s of Soviet troops, and caused significant political, military, and regional instability well into the mid-1950s. To be blunt; Ukrainians know how to kill Russians. They are not the Iraqi army; they won’t flee, surrender, nor abandon their positions outright. Their remarkable and heroic stand in a recent tank battle outside Debaltsevo, where a reported 15 Russian tanks were destroyed by a handful of Ukrainian fighters, underscores this. Remember; while Putin is deceiving the world with covert Russian Special Forces, he is also deceiving Russians with thousands of forced-contracted conscripts. Unlike their experience in Afghanistan, Russia cannot contain the ubiquity of countless YouTube uploads or Facebook and Twitter chatter citing scores of Russians killed in Ukraine that contradicts the most outlandish statements from Russian senior leadership. Ukrainians understand precisely the enemy they are dealing with and the consequences of inaction. Besides, there are countless ways to provide arms to Ukraine that can be funded by the US and others, supplied and distributed by the Poles, Czechs, or Slovakians. They too know the enemy they are dealing with, and they would not hesitate to support this.

3. “To sue for peace is one of those delusions…” This strikes at the incongruence of Mr. Chapman’s position; let’s not arm Ukraine because it might agitate Russia more, or will only accentuate causalities on both sides. Ironically, this is where Mr. Chapman and I partially agree; both those things may happen. However, most geo-strategists, including the bipartisan cadre of our nation’s most esteemed elder statesmen agree; Brzezinski, Albright on the internationalist- left, and Shultz and Kissinger on the realist-right, all have concluded the status quo of Russian coercion and non-attribution operations in Ukraine in an effort to create another Transnistria/Abkhazia-like state of endless instability on NATO’s border is not acceptable. They too know the enemy with which we are dealing. Mr. Chapman neglects the Soviets were finally subjected to so much internal, social, and militarily operational blowback in Afghanistan that they finally capitulated. (Watch Charlie Wilson’s War to let that sink in) Also, not lost on the 40th President’s 104th birthday, the same steady, stay-the-course approach on SDI and US military and diplomatic maneuvering and influence led to the ultimate demise of the USSR’s 75 years of unprecedented tyranny and oppression . “Tear down this wall” indeed.

Russia is militarily powerful. Yet, it’s not the global conventional threat it was during the Soviet era. It’s a regional hegemon that has a GNP comparable to Italy. It gives us, however, a moment of pause because it is an enigma; it is a regional hegemon that happens to retain a strategic nuclear arsenal and a seat on the UN Permanent Council. Yet, NATO and the EU, while still reluctant, are capable to apply greater “whole-of-government” pressure that includes not only military arms and positioning, but greater diplomatic, economic, and political pressure that Russia simply cannot match to compete. Mr. Putin is counting on western inaction to succeed. To do nothing is a choice; a choice the world cannot afford.