The Taste of Crow, and Other Random Thoughts

Fletcher Armstrong
|
Posted: Nov 15, 2016 9:44 AM
Share   Tweet
The opinions expressed by columnists are their own and do not necessarily represent the views of Townhall.com. 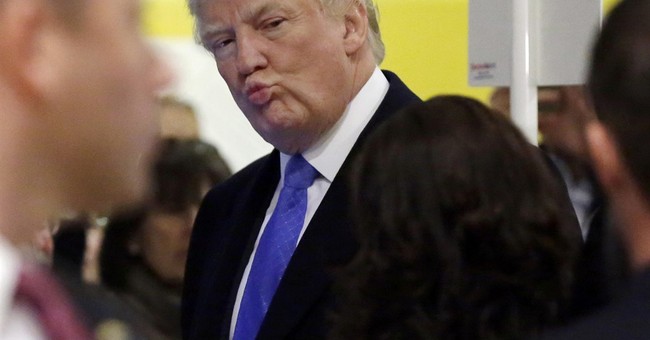 I was wrong. Surely Republicans would never nominate Donald Trump for President. Because surely he had no chance of winning. But they did, he did, and crow never tasted so good!

Uneducated racists. When they voted Democrat, they were “blue collar working men.” When they vote Republican, they are “non-college-educated white men.” In other words, uneducated, racist, bitter clingers.

Ding-dong, the witch is dead! Trump showed Republicans they need no longer fear the media hacks and their mockery, dishonesty, and hypocrisy. Trump pushed back. Hard. He wasn’t afraid to speak his mind and call the media out for being the crooked liars they are. They cranked up their attack machine, but it didn’t work. Let’s hope conservatives have learned their lesson and never forget it.

We’ll show you! In 2008, John McCain won Missouri by only 0.1%. But in 2016, Trump won by 19.1%. Why? Maybe it’s because the Show-Me State was the epicenter of Black Lives Matter. In Ferguson, they marched on behalf of a violent criminal shot by a police officer in self-defense. At the U of Missouri, the President and Chancellor were fired for not providing adequate “safe spaces.” Voters clearly saw the Left’s arrogance and intellectual dishonesty, and they reacted accordingly.

Expanding the base. Trump’s vote total was almost identical to Mitt Romney’s. Although millions were turned off because of his personal negatives, he brought out new voters hungry for a new direction. Trump often struggles to articulate and defend conservative principles, but it’s a good bet he won millions of votes that a more ideological conservative would not have won.

Cautiously optimistic. Because Trump is neither ideological Republican nor Democrat, he might be the one person who can pass key legislation on health care, tax policy, etc. Yes, he can be an egotistical showman, but so what? He is the fighter that Republican voters have long awaited. He is a tough, smart business guy who will not accept failure. That’s what we need right now, because failure is not an option.

If necessary, ditch the Senate filibuster rule. Republican voters nominated Trump because they are fed up with excuses. Since 2010, Republican politicians (RepPols) have made big promises, followed by failures and excuses. They said, “we don’t have the White House” or “we don’t have 60 votes in the Senate.” But now, there can be no more excuses. Republican voters will not stand for it. If RepPols can’t get the 60 votes in the Senate, they should abolish the filibuster rule and do it with 51 votes. Get it done.

Republican Senators fear that if they abolish the filibuster now, Dems will be completely unchecked when they regain control. But if the RepPols repeal and replace ObamaCare and keep their other promises, they won’t have to worry about the Senate flipping back to the Dems. They should govern well now, while they have the power; otherwise they won’t have the power long. Besides, the Dems seem to get their way whether they have 60 votes or not.

RepPols should fear Republican voters, not Democrats. Some Republicans fear overreach. If we don’t get bipartisan agreement, they argue, then voters will reject us like they rejected Obama and his policies. But overreach is a bigger problem for them than for us. That’s because their solutions don’t work; ours do. Good policies should be pursued with all vigor.

We’ve seen this work at the state level for the past 6 years. RepPols kept their promises, even as leftists screamed bloody murder. In response, voters rewarded them with even bigger majorities. Wisconsin is a prime example, but there are others. When RepPols don’t keep their promises (e.g., when the Republican Congress increased deficit spending from 2002 to 2006), they anger their own voters and they lose.

A lesson for pro-life legislators. Trump was the model pro-life candidate. He promised to do the most important things a president can do (appoint pro-Constitution judges and defund Planned Parenthood), but he didn’t make abortion the centerpiece of his campaign. There are millions of voters who don’t mind voting for a pro-life conservative. In fact, they actually support restrictions on abortion. But they don’t like preaching; it makes them nervous.

We’ve seen this same dynamic at the state level since 2010, when so many state legislatures flipped to Republican. Republican challengers were openly pro-life, but they talked more about economic sanity, jobs, etc. When elected, they enacted pro-life legislation, and the voters were fine with it. The lesson: make reasonable promises and keep them, but don’t preach about it.

A stay of execution, not a pardon. Trump’s election was a stay of execution, but I fear constitutional government is still on death row. Ronald Reagan said, “Freedom is never more than one generation away from extinction. We didn’t pass it to our children in the bloodstream. It must be fought for, protected, and handed on for them to do the same, or one day we will spend our sunset years telling our children and our children’s children what it was once like in the United States where men were free.”

As a person who regularly interacts with college students, I am very concerned about that next generation. About 90% of college professors are Democrats, Marxists, leftists, etc. Alternative viewpoints are not tolerated, at least not on the faculty. In class, conformity is the order of the day. The only debates are between far left and extreme far left. Traditional views are labeled as hate speech. Christians and conservatives must either assimilate or go hide in the closet.

They are barely out of their teenage years, and thus extremely vulnerable to leftist propaganda. Nobody is helping them deconstruct and critically evaluate what they hear, much less push back against it. If we don’t figure out a way to teach the next generation about capitalism, the Constitution, the rule of law, federalism, etc., their children will not live free.