OPIC: Corporate Welfare by Any Other Name 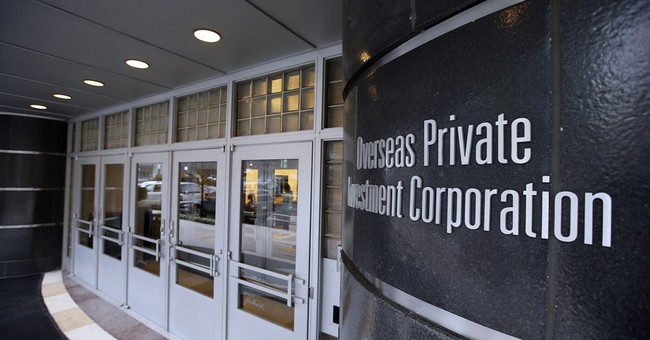 The winds of change might finally be blowing in Washington. For the first time in 81 years taxpayers are no longer dolling out dollars on risky loans to subsidize big businesses and foreign corporations, thanks to the expiration of the controversial Export-Import Bank. While this represents a victory for the taxpayers over well-funded special interests, there remains an alphabet soup of government bureaucracies that continues to dispense taxpayer goodies to those with political connections and clout.

OPIC (Overseas Private Investment Corporation) despite what the name implies, is not private but rather a taxpayer-backed outfit that provides subsidies for American businesses who invest overseas. The government provides loan guarantees as well as direct loans to American companies in emerging markets. By doing so OPIC shifts the risk of these ventures off the companies and straight to the taxpayers. Sound familiar?

The bad news is that, like the Export-Import Bank, this creature of Washington has been around for decades and has survived by free riding on legislation with broad bipartisan support to escape scrutiny. The good news is that bringing previously unknown organs of the federal government out into the open has proven to be an effective way to make these outdated and unpopular agencies a thing of the past – something we have seen recently in the fight over the little-known Export-Import Bank.

Put another way, the more everyday Americans witness how their hard earned money is being spent by unaccountable bureaucrats in Washington, the louder the cries to Congress to let corporate welfare expire.

Some of the most egregious examples of OPIC funded projects include $50 million for a Ritz-Carlton luxury hotel in Istanbul, $150 million for Citibank to open up three overseas branches and even a loan that defaulted on an Enron operated power plant. Not exactly the best use of taxpayer dollars.

Fortunately, like the previously mentioned Export-Import Bank, OPIC’s authorization is set to expire in September. And like Ex-Im, lawmakers should take that opportunity to send this antiquated agency packing.

As we saw recently in the tug-of-war over the Export-Import bank, this will be an uphill battle, but it is a battle than can be won. A strong anti-cronyism movement across the country has buoyed the efforts of leaders committed to breaking up the cozy relationship between big business and big government that too often thrives in Washington. It is a chance to capitalize on the momentum of recent policy victories, and notch another win for taxpayers. Lawmakers should seize it.

As Milton Friedman wrote in 1996 “"I cannot see any redeeming aspect in the existence of OPIC. It is special interest legislation of the worst kind, legislation that makes the problem it is intended to deal with worse rather than better. ...OPIC has no business existing." It seems Washington might finally be catching up with Friedman’s wisdom, but now it’s time to follow through.