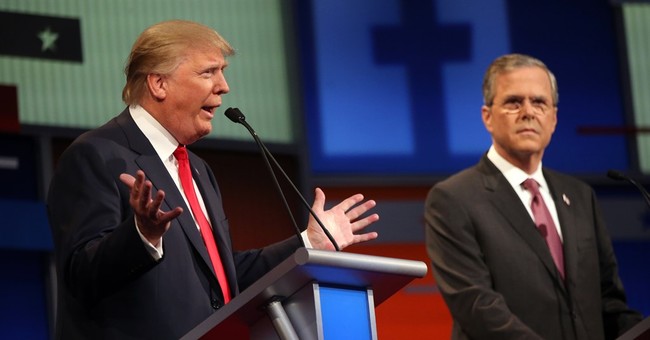 It was a long debate. "The Sound of Music" with Julie Andrews clocked in at three hours. The CNN debate in Simi Valley, Calif., ran longer than that. It became an endurance contest between a lot of politicians used to East Coast time. By the time they were done, it was after 11 p.m.

What we learned along the way was that Carly Fiorina is ready for prime time. In Ohio, Fiorina sat at the kids' table debate. CNN actually shifted its polling requirements a bit to accommodate for the rise of Fiorina after that first debate. It was to the network's credit that they did so.

In the Reagan Library this past Wednesday, Fiorina became the first candidate in this campaign cycle to make Donald Trump retreat. Trump, having just refused to give Jeb Bush a pass for misspeaking on women's health, was confronted with his remark about Fiorina's face. Trump said two weeks ago, "Look at that face! Would anyone vote for that? Can you imagine that, the face of our next president?"

Fiorina's priceless response when asked by CNN's Jake Tapper was, "You know, it's interesting to me. Mr. Trump said that he heard Mr. Bush very clearly and what Mr. Bush said. I think women all over this country heard very clearly what Mr. Trump said." The crowd went wild.

That was, of course, why Trump gave a rather flat performance. He plays to the crowd. In Ohio, the crowd was boisterous and large. It played well for Ohio's Gov. John Kasich as the home field advantage. It played well for Trump, too. Not so in California. Instead, Fiorina shined. She gave strong answers on Planned Parenthood and national security. She connected with the audience in sharing the death of her child to drug addiction. She was unflappable.

Fiorina will probably begin taking support away from most of the other candidates. Scott Walker, who has been on a downward trajectory, probably stabilized himself in the debate, though he had the least amount of time to speak of all the candidates. But Fiorina might start eating into Walker's support. She will probably also eat into Ben Carson's support. Carson did not come across poorly, but he did come across without much energy. Fiorina will rise and Carson will drift downward.

If Fiorina rises, so, too, will Marco Rubio. Fiorina might have won the debate, but Rubio won Bush donors over along with others. He showed himself again to be a fresh face with new ideas and also a storyteller. People should not underestimate storytelling.

The governors on the stage talked about their records. They talked about 2.5 million this, 100,000 that, so much cut, and so much saved. Rubio talked about his immigrant grandfather fleeing the communist uprising in Cuba. His grandfather spoke no English, but told Rubio to commit to America.

Instead of talking data on global warming, Rubio talked about the economic impact on the poor and middle class. On ISIS, he did not cite troop numbers, but talked about safe havens. Republicans often lament no storytellers in their ranks. Here is a storyteller who connects with people through those stories.

There was, of course, another debate, too. CNN, like Fox News, had a kids' table debate. In it, Louisiana's Gov. Bobby Jindal gave a forceful defense of conservatism against the Republican Party. It was refreshing to hear a candidate put principle above partisanship.

Jindal pointed out that President Obama has kept all of his promises. He said the president has done exactly what he set out to do. But it is the Republicans who have broken all of their promises. They pledged to stop the president, but they keep funding him.

Fiorina graduated from the kids' table to the main debate stage. It is time to get Jindal into the main debate, too. He is willing to be principled, even when it means being critical of his own side. That, in an age of hyper-partisanship, is refreshing.