Cruz to the Front 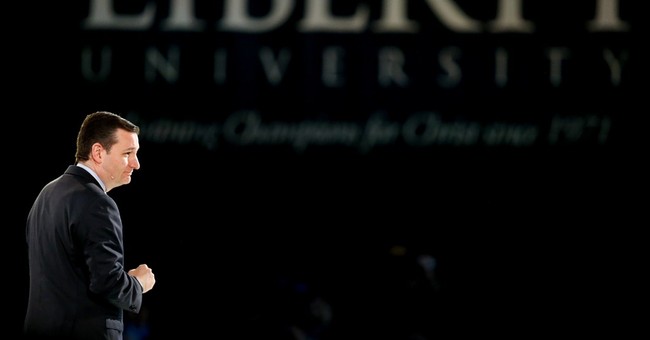 Were the election for president held today, Ted Cruz would be president of the United States. It would not be by virtue of his polling, his positions or his charisma. Cruz just happens to be the only officially declared major party candidate for president. That will soon change.

The 2016 presidential primary for the Republicans will see the most experienced field of candidates since 1980. That year, the former governor of California, Ronald Reagan, challenged other governors, a former CIA director and members of Congress to clinch the nomination. It is worth remembering that men like former president Gerald Ford, bristled behind the scenes, convinced Reagan could not win.

The same echoes have begun with regard to Ted Cruz. The former solicitor general of Texas and one-term senator will have to prove himself. Criticism from Republicans who harbor grudges against Cruz for daring to make them actually fight the president range from his lack of qualifications to his lack of accomplishments in Washington.

Conservatives, however, will look at Cruz's accomplishments from a different perspective. Everett Dirksen, the Senate Republican Leader in the 60s, is often cited as coming up with the saying that there are two parties in Washington, the stupid party and the evil party. Every once in a while the stupid party and evil party get together and do something that is both stupid and evil. The press then heralds it as a bipartisan accomplishment.

Ted Cruz's great accomplishment in Washington has been to fight back against things that are both stupid and evil. Those who demand to know what major policies Ted Cruz has advanced to passage will find few things. But those who ask what has Ted Cruz stopped that would harm Americans or their wallets will find many things.

When the White House decided to suspend flights into Israel, Cruz held up a presidential appointment. Flights resumed quickly. When Republicans and Democrats were working together to drive up the national debt, Cruz rallied other House and Senate conservatives to get the plan scaled backed.

Cruz has not won every fight. The Republican establishment hates him almost as much as the establishment hates the Republican base. They blame Ted Cruz for a government shutdown when, essentially, that shutdown exposed the Republican leadership in Washington as a bunch of hucksters fundraising on the desires of its voters only to ignore those desires once in power. These same leaders were almost gleeful at the thought that they could blame Ted Cruz for the GOP not winning the Senate in 2014. Then they did win and have behaved like the dog that caught the car ever since.

The measure of a conservative in Washington, who went to "make DC listen" as Cruz's twitter hashtag suggests, cannot be "what have you done for me," but must be "what have you stopped from being done to me." Cruz, however, will now ironically pivot to tell the American people what he wants to do as president. A presidential candidate cannot run on no agenda. We will finally get to see Cruz's governmental agenda. We can finally decide for ourselves what the nation would look like after four years of a President Cruz.

It will not be easy for Cruz. Like Rand Paul and Marco Rubio, Cruz has only been in the Senate for one term. Many Republicans still think it was a mistake to make a one-term senator from Illinois the president of the United States. Unlike Paul and Rubio, Cruz has generated a healthy list of enemies because of his fights.

To get the Republican nomination for president, Cruz will also have to draw contrasts between his accomplishments and vision and that of several governors named Perry, Jindal and Walker at a minimum. It is a simple reality that running for governor is more akin to running for president than going from a legislative to an executive role. Ted Cruz could be president tomorrow because he is the only declared candidate. But the election is not tomorrow, and the field is about to grow.