Must We Have a Dead White Kid? 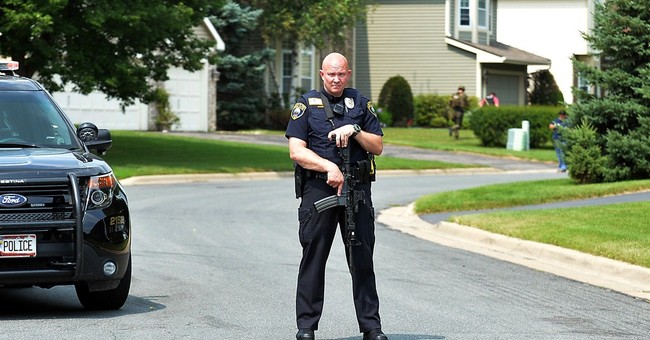 The facts that seem undisputed -- and in these situations that is so rare -- are that an unarmed 18-year-old named Michael Brown was walking in a street; an altercation occurred with a police officer; the officer gave chase to Mr. Brown after the scuffle and shot Mr. Brown at least once in the back, approximately 20 feet from where the scuffle occurred.

The police officer claims Mr. Brown tried to take the police officer's gun. Witnesses disagree. What is undisputed is by the time you read this, Mr. Brown, who worked his way through a bleak high school education in Ferguson, Missouri, would have been in a college classroom. He defied the odds of many young black men -- graduated from high school and would have started college last week, had he been alive. But he failed to beat the odds of young black men having bad encounters with police.

It is a painful discussion to have in the United States. Too many people profit from racial tension. The media profit by fanning flames and selling papers -- often making themselves the story. Activists in the black community profit by fanning flames of racial unrest and grievance. Activists in liberal circles fan the flames of privilege, class warfare, etc. Conservative activists fan the flames of rhetoric and push back.

Meanwhile, an 18-year-old is dead and everybody is yelling at each other. Facts become more and more disputed. It also becomes less likely that the real truth of what happened can be arrived at.

While conservatives tend to be law and order supporters, there is growing concern about the militarization of local police. Look to Ferguson, Missouri, where policemen who spend their days writing speeding tickets were clad in armor, behind helmets and shields, riding in armored personnel carriers with guns mounted on top.

Conservatives have long lamented the buildup of armaments and stockpiling of bullets by the Department of Homeland Security. The media has mostly treated these conservative concerns with derision. Suddenly, last week, when reporters were detained by the police in Ferguson, Missouri, the media had to pay attention to the militarization of the police and overkill by local police forces.

Given what happened in Ferguson, the community had every right to be angry. The police bungled their handling of the matter, became very defensive and behaved more like a paramilitary unit than a police force. Property damage and violence by the citizenry cannot be excused, but is also the result of a community seeing those who are supposed to protect and serve instead suiting up and playing soldier.

Congress passed the Posse Comitatus Act in 1878 as Reconstruction came to end. The law ended the military's ability to enforce laws on domestic soil. The police had to be used. But since Sept. 11, 2001, many police departments in the country have turned themselves into mini-militaries. It used to be just a SWAT team ready to take on bad guys.

More and more, the police are suiting up to contain and control the population they are supposed to serve. Not a week goes by without encountering horrific stories of police abuse. In Dallas, Texas, the independent school district has a SWAT team. In New York, a man died after police put him in a chokehold for the high crime of selling cigarettes.

Just because Michael Brown may not look like you, should not immediately serve as an excuse to ignore the issues involved. Likewise, a media suddenly invested in stories of government overreach should not be dismissive of stories of bureaucrats, not just police, abusing the public trust.