The PRO Act Is Anti-worker

Erica Jedynak
|
Posted: Jun 28, 2019 5:15 PM
Share   Tweet
The opinions expressed by columnists are their own and do not necessarily represent the views of Townhall.com. 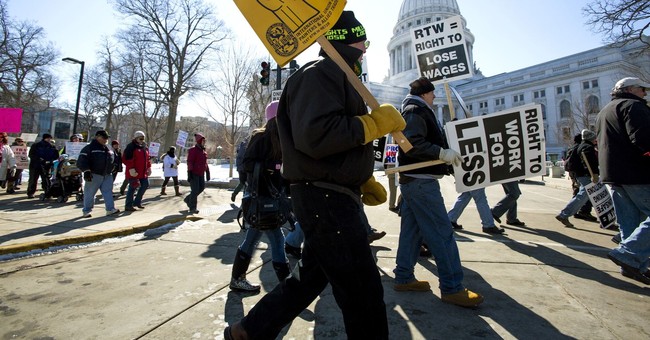 For the past several decades, we’ve seen workers across the nation see more choice, thanks to the landmark U.S. Supreme Court Janus v. AFSCME decision reaffirming First Amendment rights and passage of right-to-work laws in 27 states. These developments protect workers from unfair coercion, such as being forced to join or pay a union just to keep your job. Right-to-work also benefits workers in another way: it leads to more jobs. According to the National Institute for Labor Relations Research, right-to-work states have enjoyed private sector job growth rates more than 1.3 times higher than in states where workers have no choices.

All of this progress, however, is being jeopardized by the newly proposed “Protecting the Right to Organize Act,” or PRO Act, which the House Education and Labor Committee rolled out this past May. This new bill would amend the National Labor Relations Act to reintroduce several new coercive policies. It would turn back the clock on workers’ rights, undermining many protections workers enjoy under current worker freedom laws.

The PRO Act directly threatens right-to-work by giving unions the power to penalize workers if they refuse to pay dues – even if they don’t want to join the union. If you are an employee of a company but you don’t want to pay union fees, that union could coerce you into paying – to the point of getting you fired.

Union leadership would also have the power to intimidate you into joining the union, since the PRO Act undermines secret elections. Back in 2009, the “card check” bill was considered, which would have eliminated secret ballot elections when deciding on union representation. The PRO Act allows unions to overturn the results of elections and set up a union through publicly signed authorization cards. The Act, in effect, implements card check, as those workers who don’t support unionizing would be exposed to harassment.

If you own a company, the PRO Act won’t leave you unscathed. If your company is being targeted by a union, you would have no right of recourse with the National Labor Relations Board, even if that union disrupts your company’s operations.

The PRO Act prohibits company owners (if their business isn’t under a union contract) and their workers to settle disputes out of court and with an arbiter. Unions would also be able to force workers to settle contracts through arbitration.

If passed, the PRO Act would impose new barriers on our nation’s economy, stunting job growth. The Act would impose a highly restrictive standard that would cause many workers to lose their status as independent contractors, as well as the freedom and flexibility that comes with it.

States have turned to right-to-work because they believe in two simple principles. First, workers deserve the right to choose whether to join a union and pay its fees. Second, when workers and their employers are free from coercion, they make incalculable contributions to our nation’s economy. As the one-year anniversary of Janus approaches, it’s time for our elected representatives to oppose the PRO Act and stand up for all workers.

Erica Jedynak is director of Employment Initiatives at Americans for Prosperity.