Bannon Among the Soi-Disant Sophisticates

Emmett Tyrrell
|
Posted: Feb 02, 2017 12:01 AM
Share   Tweet
The opinions expressed by columnists are their own and do not necessarily represent the views of Townhall.com. 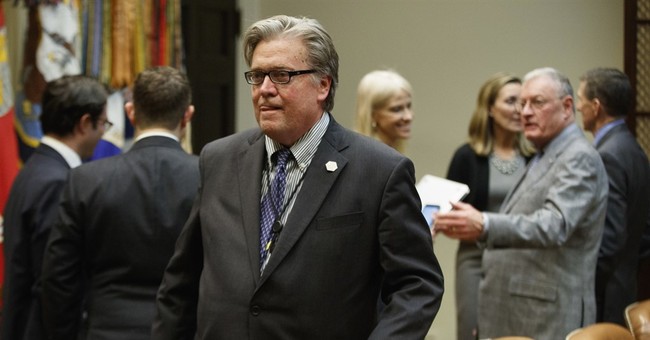 Trending
WASHINGTON -- Last week, President Donald Trump's recently appointed chief White House strategist, Steve Bannon, caused a stir among the press corps. He telephoned The New York Times and in what the Times reported as "blunt but calm tones" proclaimed, "The media should be embarrassed and humiliated and keep its mouth shut and just listen for a while." Journalists reacted to his comments with "alarm and defiance."

Christiane Amanpour, the pulchritudinous CNN correspondent, captured the alarm of many journalists when she responded on Twitter, saying, "Sorry, what country are we living in?" Well, perhaps I can be of help here. Ms. Amanpour, you are a citizen of the United Kingdom, being of British-Iranian heritage. Moreover, I have it on very good authority that you are living in London. So long as you obey the laws of the United Kingdom, you should continue to thrive; and so long as your documents are in order, you can travel to our shores anytime. But I advise you to avoid maudlin outbursts, especially in the presence of President Trump and Mr. Bannon.

Incidentally, Bannon knows his way around politics and media in this country. He was, until August, the chief of Breitbart News, and before that he was a naval officer and an executive at Goldman Sachs, and he did a stint in Hollywood. Now he is in politics. Looking back on the election, he says, "The elite media got it dead wrong, 100 percent dead wrong." And he notes, "The mainstream media has not fired or terminated anyone." I wonder why. The vast majority of political journalists might have awakened on Nov. 9 asking Amanpour's question: What country are we living in?

For instance, at some point during the election cycle, The New York Times beheld a photo of candidate Trump waving at Trump Tower and joked: "Why he will win: We are stumped. And we really tried." The newspaper was parroting the early insight of George Will, who said on Fox News "Special Report" that he would bet "One dollar on Donald Trump in the hope that he will be tempted to run, be predictably shellacked, and we will be spared ever more these quadrennial charades of his." And so it went. The entire establishment got it wrong.

I could go on, but let me leave it that. There has never been in the history of the United States a ruling class -- no, strike that -- a class of so-called sophisticates so out of touch with the electorate. Their political leaders are now joining the feminist marchers and their mama's boys in weeping in public. Last week, Bannon startled the whole class of so-called sophisticates by calling their press corps "the opposition party." Well, it looks like an opposition party to me. They were almost unanimous in opposing Trump and flaunting certain values that only they occasionally maintain, such as fairness.

William McGurn at the Wall Street Journal is one of the handful of us in the press corps who are not guilty of being members of the opposition party. In his column this week, he came up with evidence that the Times has agreed with Bannon in the media being the opposition party. Back on Aug. 8, McGurn found the Times writing: "If you view a Trump presidency as something that's potentially dangerous, then your reporting is going to reflect that. You would move closer than you've ever been to being oppositional." At The New York Times, do they ever tire of eating their words?