A Quiet Afternoon With the BBC

Emmett Tyrrell
|
Posted: Nov 17, 2016 12:01 AM
Share   Tweet
The opinions expressed by columnists are their own and do not necessarily represent the views of Townhall.com. 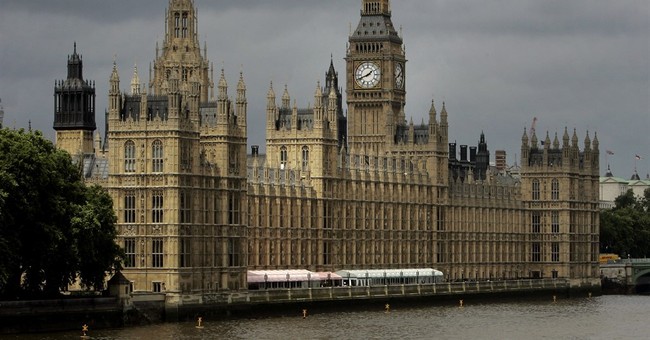 Trending
WASHINGTON -- On Friday, the BBC enlisted me to defend my support of Donald Trump for president. Though the ensuing television interview was conducted in English, I found it incomprehensible. I was speaking in my native tongue to two apparently intelligent English-speaking women, yet their responses to my clear, if amused, rejoinders amounted to gibberish. They sought to understand Trump's victory but did not have the most elementary understanding of the American democratic process or any grasp of rational thought. I detected no whiff of alcohol on their breath or any other sign of inebriation. They showed no sign of drunkenness or drug abuse, so I left the studio perplexed. Ultimately, I wrote my friend of 35 years, Andrew Roberts, the distinguished historian, and asked, "What gives with the BBC?"

First, I asked Andrew whether he had ever heard of the so-called novelist whom the BBC brought forth to engage me. I had never heard of her, and for decades I have kept an eye on the intellectual vistas as editor-in-chief of The American Spectator. She is a Nigerian lady of supposedly great gifts named Chimamanda Ngozi Adichie, though it soon became apparent that she was in an impenetrable fog about the recent election. She gave a highly emotional rendering of the election, saying something about how it left her feeling very much alone, and I guess bereft. Why on Earth she was appearing before a British audience to discuss an American election I have no idea. If the BBC wanted to explore creative writing, I suppose she was their gal. But then what was I doing there?

The interview got off to a bad start and became worse. The moderator, Emily Maitlis, commenced asking: "The first ever black president will be followed by a president who is endorsed by the (Ku Klux Klan). ... Where does that leave you?" My response was what any normal American would respond. I said, "I can't imagine anybody (sic) more marginal to American elections than the KKK." I went on to say, "Every four years the KKK comes up because people like Hillary Clinton want to bring the KKK up." I began to add that the Klan was composed of a few hundred stoneheads living marginal lives in the American outback until they could be dredged up to serve the Democrats' malign purpose, but the moderator interrupted me to ask, "So it doesn't shock you?" I responded, why not talk about the influence of the Knights of Columbus?

My interlocutors apparently had no idea what the largest Catholic male organization in America might be. The host inquired, is it "another extremist group?" At that point I was reminded that fruitful conversation is utterly impossible with the woefully ignorant. My thought was reinforced by the ever-helpful Adichie who observed: "There seems to be a refusal to accept reality. So (Maitlis) has asked a question about the KKK, and it hasn't been engaged with, and instead we're being told that there's this other group called the Knights of Cint-whoever." I replied: "Balderdash. That is balderdash," which "engaged" both of these ladies.

The conversation's downward spiral continued. A memorable moment was when Adichie notified me: "If you're a white man, you don't get to define what racism is. You really don't." I responded, "Do you know that the false consciousness, which is the theory you're talking about, is a Marxist concept?" She had not a clue as to what false consciousness meant, but you might think about its consequences for intelligent debate the next time you hear it employed by a lazy mind. Then la Adichie came up with more evidence of the president-elect's alleged racism. When Trump says that a judge "is unable to judge him fairly because he is Mexican, that is racist," she said. I supplied her with the judge's name, Judge Gonzalo Curiel, and suggested he is as white as me. We are both white men. Race was not at issue between us. My correction had no impact on her. She continued in her invincible ignorance.

The next day, Andrew Roberts got back to me. He had never heard of Adichie either. And he added, "The idea that white males have nothing to say on race is itself racist (and sexist)!" Thus, my brush with these two ladies has been put in historic perspective by a historian. But I feel there will be more inscrutable moments with the left before its members quiet down. Medication might help.