What Donald Trump Has Learned

Emmett Tyrrell
|
Posted: Jun 23, 2016 12:01 AM
Share   Tweet
The opinions expressed by columnists are their own and do not necessarily represent the views of Townhall.com. 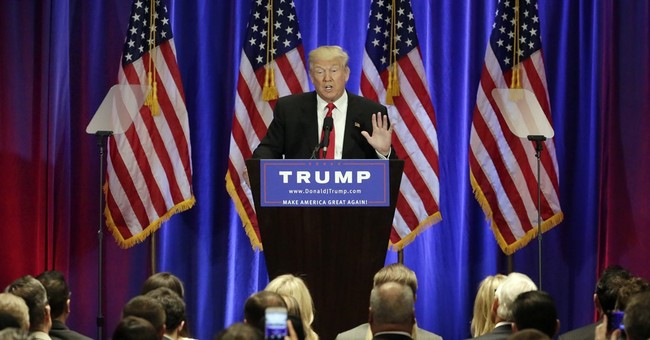 Trending
WASHINGTON -- It has now been a year since Donald Trump formally became a politician and declared his candidacy for the nation's highest office. Actually, it has been a little over a year, because he considered it for months before he announced it from Trump Tower on June 16, 2015. What has he learned?

Well, he has learned that while there are developers who would try to sell you the Brooklyn Bridge they do not hold a candle to politicians when it comes to lying, and that goes double for the mendacious political press. Moreover, he has learned that though there may be opportunists among his fellows in the real estate business, they are veritable good Samaritans when compared with the big-league opportunists in politics. Donald, it is too late to back out of politics, but when it comes to lying, opportunism and general deceit, now you know: Politics takes the cake. Indeed, it takes all cakes.

Now you are up against the most corrupt politicians in American history: the Clintons. The Longs of Louisiana were pikers compared to them.

The Clintons have been at it for over 35 years, and they have never spent a night in jail -- not even for a DUI, not even for cocaine violations back in the 1980s. Bill Clinton's hapless half-brother, Roger Clinton, and his campaign contributor, Dan Lasater, took the rap for him. Throughout their years in Arkansas and Washington, D.C., and now on the world stage, the Clintons have amassed a vast fortune, first in cattle futures, then in crooked land deals, then in campaign finance and fundraising for The Clinton Foundation and Shakedown Project Inc. Along the way, Bill Clinton has abused women, and Hillary Clinton has covered for him with private investigators (some of whom are in jail), her artful use of political pressure and her influence on the press. More recently, Bill has spoken for huge fees here and abroad (Hillary has been on the circuit, too), some arranged by Clinton factotums in the Clinton-run State Department.

Just recently we have discovered that Bill Clinton made $16.46 million from the so-called Laureate Education Inc., while the Clinton State Department shelled out $55 million to a consortium run by Laureate founder, Chairman and CEO Douglas Becker. There are so many scams originating from the Clinton family that Trump is overwhelmed only after a year in politics. What will he make of her flouting of government rules to handle her emails? She has repeatedly lied about it, from the little white lies about using her private server for convenience, to felonies about the server's security and commingling Foundation business with State Department business. Then there are her lies about the 2012 Benghazi attack. Americans were killed because of her negligence. She even lied to the dead Americans' families.

All of this is now known. At least it is known by people in politics and the media. Yet, they have made it clear that they are turning a deaf ear to the Clintons' record of scandal. Back in 1997, former FBI Director Louis Freeh, when asked during a Congressional hearing if he had ever seen anything like the number of witnesses pleading the Fifth Amendment during one of the Clintons' scandals, said, "Actually, I have." He proceeded to liken the spectacle to his "16 years doing organized-crime cases in New York City." There's a quote that one does not hear these days.

Now we have witnessed the murderous rage in Orlando, where the gay nightclub, Pulse, was targeted on Latin night by a terrorist. It is clear that the butcher has claimed membership in radical Islamist organizations and told police he was following the dictates of sharia as practiced in the Islamic world. Orlando was just another chapter in a saga that contains bloody precursors such as Fort Hood, the Boston Marathon and San Bernardino. The elites of the Democratic Party and the media are turning it into a debate about gun control, nomenclature and tweets by Trump.

Very few observers have raised the question of Hillary Clinton accepting millions of dollars in donations from Middle Eastern countries for her and her husband's causes. Should the Clintons not at least give the money back?

In his year as a politician, Donald Trump has had an opportunity to learn a lot. He has learned that politics in America today is a dirty business, all the more so since Hillary Clinton, upon clinching the Democratic nomination, has been given a clean slate from a media that intensifies its attacks on him. The unanswered question is: Has Trump learned enough to beat Clinton? After all, he has learned to call her Crooked Hillary.