A Manifesto of My Own

Emmett Tyrrell
|
Posted: Jan 28, 2016 12:01 AM
Share   Tweet
The opinions expressed by columnists are their own and do not necessarily represent the views of Townhall.com. 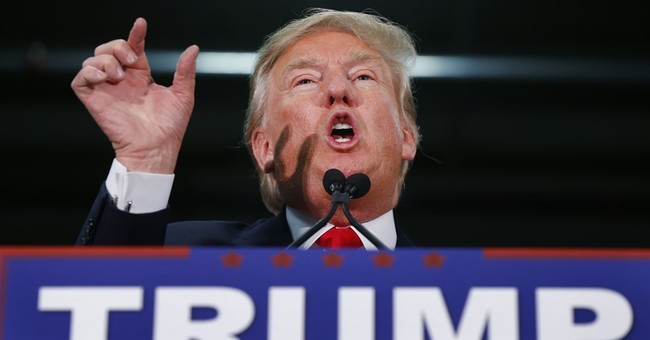 Trending
WASHINGTON -- In reading Paul Johnson's masterful "Art: A New History," I came across a startling number of art masters who did bodies sublimely, hands and even landscapes brilliantly, but who could not plausibly paint a human face. Some of the artists recognized this and had their subjects look over their shoulder or off to the horizon, or were painted behind a floppy hat. Nonetheless the artists are esteemed as great, though limited.

That thought ran through my mind when I first encountered National Review's manifesto on Donald Trump. Some of these accomplished writers have a knack for political ideology, for political culture, for journalism. But few have any talent for politics. Several have supported John McCain's and Mitt Romney's candidacies. Several have denounced Newt Gingrich's presidential ambitions along with me. But not many have served as political advisors, which might be a mark in their favor. Still, that does not give them a credential in politics.

In appraising this year's Republican field, we are not appraising a lineup that includes the Founding Fathers or A. Lincoln or E. Burke. We are reviewing a very good field of Republican candidates, any one of whom would be preferable to the Democrats' field of two undersized adversaries and an indictable potential felon, to say nothing of Adolf Hitler and various other unsavory figures who have been mentioned in the controversy created by the aforementioned participants, many of whom I know and some of whom have participated in The American Spectator over its long history.

We American conservatives have for years been confronted by an atmosphere polluted by the values of the left. Apparently, it has made some of us excitable. Those who take strength from the America that exists beyond the Manhattan-Washington corridor long for limited government, a balanced budget, economies in government, the rule of law, traditional American values, orderly immigration and an end to political correctness. We have become impatient with the oppression of political correctness and its absurd pretensions. We do not see anything wrong with making America great again. We know that "leading from behind" is an impossibility, plausible only to a fantasist who uses the power of the state to chloroform its citizenry.

Some of us have favored easy immigration or other reforms. Yet times have changed, and they have been changing for many years. Frankly, I see the wisdom in John Maynard Keynes' riposte: "When my information changes, I alter my conclusions. What do you do, sir?" At The American Spectator, we have always been a big tent magazine. We have writers who favor Senator Ted Cruz, Senator Marco Rubio, Governor Chris Christie, Governor Jeb Bush -- the whole lot of them. We run criticism of Donald Trump by the likes of Ross Kaminsky, Aaron Goldstein, Larry Thornberry and others. We have run the pro-Trump writing of Jeff Lord, Esther Goldberg, and Frank Buckley, and, of course, me. It is a big tent at The Spectator, as big and wide-open as this race for the presidency.

As for me, I am for the candidate who has come forward and in a matter of months opened up the race and attracted still more voters. I am for Donald Trump. In mere days, Trump has illuminated an issue that the Clintons have continued to thrust behind the arras for 23 years: Bill Clinton's abuse of women and Hillary Clinton's enablement of him through her servitors and her use of private investigators. The Clintons' corruption of government in the White House during the 1990s and more recently in fundraising for themselves, their foundation and her campaign, often from her office in the State Department, is now a matter of record. Trump has been instrumental in exposing them. Her computer server will prove to be for 2016 what Monica Lewinsky's blue dress was for Bill's presidency, irrefutable proof of Hillary Clinton's lying and obstruction of justice. The FBI is putting the finishing touches on the case.

I am for the candidate with a sense of humor, of showmanship, and a proven record for getting things done. Now on "The Today Show" this week, Donald Rumsfeld, a veteran conservative, has come forward and said that Trump has "caused people to respond in a way that most politicians have not been able to do." Rumsfeld is no vulgarian.

I agree with him. Trump is a new and promising participant in American politics, and he is on the conservatives' side. Here is history in the making.