Female Warriors and the Bottle 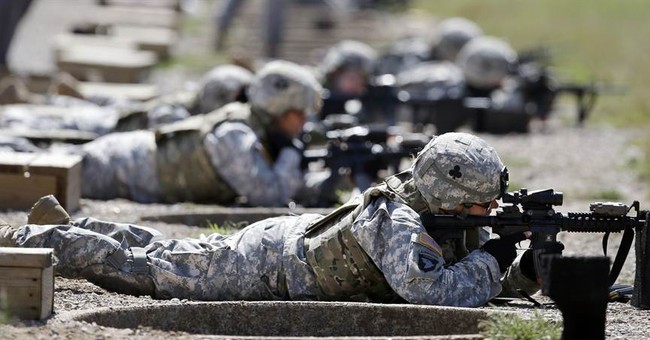 Trending
WASHINGTON -- It is apparently a little-known fact in the Obama administration that girls are weaker than boys and that grown women are weaker than grown men. Moreover, women training for combat positions suffer physical injuries at twice the rate of men, and they suffer significantly higher rates of mental disorders such as depression and anxiety after exposure to combat. Of course, you probably knew this by simple observation or by reading the sports page and noting that women's athletic records are significantly lower than men's records. But then, you are not in the Obama administration.

The administration is being forced to deal with these facts because in response to its announcement this month to admit women to full combat, including special operations, certain studies conducted by the Pentagon are being publicized. In one, an Army study finished last summer, women performed as you would expect. That is to say, they performed less well than men, at least in combat. According to the findings, women cannot carry so much weight as men, and when they do, they often break down. For instance, when women carry 70 pounds of military equipment on their backs through rough terrain, they suffer twice the rate of injury as men. Then, too, they do not adapt to military life as well as men. On the other hand, men in the military suffer twice the rate of alcohol abuse as women. So possibly the Obama administration will conclude female soldiers should drink more. There is no arguing with a fanatic.

So what are the fanatics in the administration suggesting to make our female soldiers combat-ready? They are not moderating their position and suggesting female soldiers avoid combat. The officers in special ops and the Marines had better get ready for the ladies' influx. Some ambitious Amazons, having digested the Army's study, have urged that female recruits arrive at base in better physical condition. Weight training and long-distance running are advised. Why not enroll the women in a crash course at Gold's Gym, all paid for by the Pentagon? Why not, by way of encouraging the ladies, offer them, along with trips to the gym, a package deal of free pedicures and facials at a nearby spa?

A program of dietary supplements has already been suggested. I am not kidding. The key is iron supplements. The Army's recent study boldly reports, "Bottom Line: Iron deficient/iron deficient anemic female Soldiers, when treated with supplements, run (about) 1-2 minutes faster on 2 mile run." The Army's surgeon general, Lt. Gen. Patricia Horoho, who oversaw this study, asserts that the military should "implement (a) multivitamin with iron program for females during intense training." There are other supplements the women can use.

What about steroids? Steroid injections have been found to make those who use them stronger and possessed of greater endurance. Our female recruits might grow mustaches and beards, but that would only make them look more menacing to the enemy. For that matter, why not give the female soldiers testosterone injections? In addition, there are all kinds of miracle drugs that could be used. I suggest the Pentagon seek the advice of Lance Armstrong, the celebrated bicyclist and winner of numerous Tour de France titles. In fulfilling his patriotic duty, he could atone for past indiscretions.

I have argued for years that once the left gets control of an institution, that institution loses all sense of what its fundamental purpose is. This is now true of the military. It is being turned into a politically correct institution in which training for battle and for winning wars has become a thing of the past. Universities lost their purpose long ago. They were originally founded to educate. Now they are engaged in "diversity programs," "identity courses," "rape awareness orientation" and the development of what a few years ago would have been considered tolerably competitive professional football teams. Government is even worse. It was originally founded to keep the peace, assure the citizenry of efficient and economic public amenities, and provide for the rule of law. Now wherever the left has taken charge -- whether in city government, in state government or at the federal level -- governments have become gigantic charities engaged in paying off their duped voters.

The answer is to throw off the left's yoke. I staunchly believe that day is coming.