The Gowdy Committee as Seen from the Left and the Right 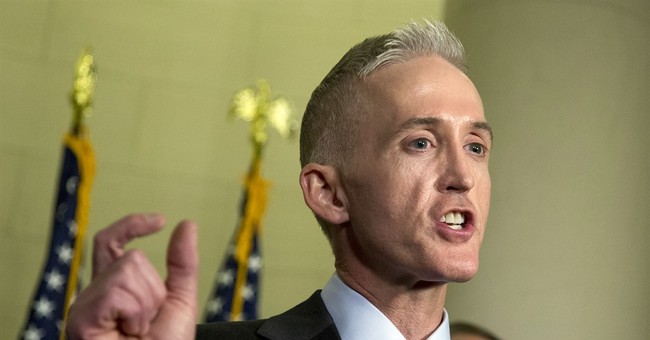 WASHINGTON -- We are told that our political system here in Washington is "broken." The left and the right do not get along, and usually it is because the right is obdurately partisan. Actually, it is not the political system that is broken. It is much wider than the political system. It is the political culture, that is to say: the politicians, the operatives, the financial supporters and the voters (left and right). It is also the commentators, the reporters, the editors; in a word the media (left and right). The left-wing press sees things one way and reports on it. The right-wing press sees things differently and reports on it. Neither side agrees on almost anything.

We just lived through a vivid example of this kind of bifurcation last week when Hillary Rodham Clinton appeared before Congressman Trey Gowdy's House select committee investigating Benghazi. The left saw nothing new or noteworthy revealed by the committee. The right saw much that was new and noteworthy. Each side was perplexed by the other side's partisanship.

As The New York Times editorialized from the left, "Unsurprisingly, the hearing yielded no new information about the attacks. It quickly and predictably devolved into a partisan battle between Republicans intent on hurting Mrs. Clinton's bid for the White House and Democrats who sought to make her look presidential." The Wall Street Journal editorialized from the right, "The House Benghazi hearing Thursday with Hillary Clinton featured plenty of brawling, but don't believe those who say we learned nothing." The Times learned nothing. The Journal learned quite a lot. I agree with The Journal. So my question is, why was what The Journal revealed in its editorial not even worthy of mention, much less derision, by The Times editorial? Did The Times editorialist take a bathroom break? Could not The Times have provided a backup?

In The Journal's editorial it revealed that the committee "turned up new information that relates directly to the former Secretary of State's political character and judgment." Remember that on the evening of the attack a statement was released by the secretary of state at 10:32 p.m. blaming the attack on an anti-Muslim YouTube video. Yet The Journal noted on Friday that Congressman Gowdy's committee "released hitherto undisclosed documents showing that Clinton believed from the start that the attack was perpetrated by terrorists." One document shows Mrs. Clinton emailing her daughter on the night of the attack (at 11:12 p.m. to be precise) that Ambassador Christopher Stevens and an aide had just been murdered "by an Al-Qaeda-like group." The committee also released a State Department summary of a talk Clinton had with the Egyptian prime minister the following day wherein she said, "We know that the attack in Libya had nothing to do with the film [the aforementioned anti-Muslim video]. It was a planned attack -- not a protest." And Clinton went on to say, "we believe the group that claimed responsibility for this was affiliated with al Qaeda." The committee also released other evidence that shows Clinton lying.

The Times never mentioned these exchanges that Congressman Gowdy released to the public and that The Journal thought so significant. "This matters [Clinton's call to the Egyptian prime minister]," The Journal goes on to editorialize, "because it precedes what became the Administration's original story that the Benghazi attack had been motivated by an anti-Muslim Internet video." The Times' editorial and its columnists never mention the new revelations about Benghazi. They inveigh against the committee for coming up with "nothing new" despite the fact that there were also other facts that if not new have hardly been discussed, for instance, hundreds of emails demonstrating that Clinton ignored Ambassador Stevens' repeated (and repeatedly urgent) calls for beefed-up security. The Washington Post, the major media, and other voices on the left repeated their mantra, "nothing new."

To the left it was all "old news." To the right, to The Journal, to The Washington Times, and to other voices on the right there was plenty of new and alarming news released by the committee Thursday.

This news story cycle has been seen before. Possibly, it was on display for the first time during the Whitewater scandal. Then as Independent Counsel Kenneth Starr went about his business gathering evidence the left-wing media -- of a sudden -- began to find "nothing new" in his investigations. It was all "old news," and it was costing the Republic millions. Once his impeachment ended, Bill Clinton and his apologists began mendaciously charging Starr with spending $70 million to come up with nothing. Actually, as I pointed out earlier this month, Starr obtained at least 15 convictions.

However, let us return to my original point. The political culture is "broken," as they say, and the media are part of the breakdown. When a House select committee comes up with new and damaging information on a presidential candidate, the media have a duty to report it, not ignore it.

R. Emmett Tyrrell Jr. is founder and editor-in-chief of The American Spectator. He is a senior fellow at the London Center for Policy Research and the author most recently of "The Death of Liberalism," published by Thomas Nelson, Inc. To find out more about R. Emmett Tyrrell Jr. and read features by other Creators Syndicate writers and cartoonists, visit the Creators Syndicate Web page at www.creators.com.