Pope Francis, I Am with You on Everything but Humility 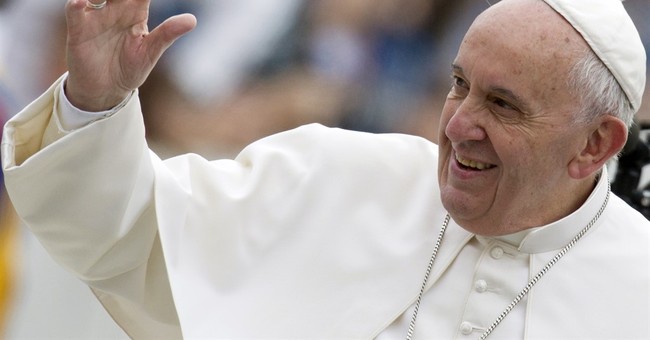 Trending
WASHINGTON -- I write as a practicing Roman Catholic. I watched the pope in America last week with pride. All the virtues that he so admirably embodies are virtues I strive to embody, too -- though he will have to excuse me on one or two. In the case of chastity, I opted for marriage, admittedly the less celebrated heterosexual type of marriage, but marriage nonetheless. Then there is humility. Frankly, I have never been able to get the hang of it. I mean, what is in it for me? I suppose it is ideal to have a humble pope, but I cannot imagine a humble editor in chief, much less a humble columnist.

Yet in all other respects I side with the pope, certainly on matters of faith and morals. On lesser matters, I have some quibbles. Purely as a managerial matter, would it not be better to allow priests to marry? I understand the economics of the problem. The Church is having a difficult time paying for one priest. At first glance, the economics would be even worse if the Church had to pay for a priest with a wife and children. But my guess is that each parish would find a way to make a go of their priests marrying. Would the married priest and his wife not be better able to run a parish school? At least that is my initial thought.

Maybe he was looking for some flicker of recognition from their long-ago childhood days. In those days, Raul Castro was an apathetic but practicing Catholic, and Fidel was a bright student whom the Catholic hierarchy considered promising material for the priesthood. Was the pope anticipating Fidel's and perhaps Raul's return to the Church? Did he expect the Castro brothers to ask him to send over a priest after the journalists had moved on? I really do not know, but Pope Francis paid them more attention than he paid Cuban dissidents, whom he snubbed. Would Pope John Paul II have acted similarly?

Such miracles as the Castros' return to the Church can happen, I know, but first the brothers would have to repent the kind of imprisonment that was chronicled by Armando Valladares in "Against All Hope." The book is Valladares' prison memoir, and it recounts decades of imprisonment, torture and grisly murders of Cubans convicted by the Castros of yearning for democracy. The suffering is still going on today in Cuba, and the pope is not recorded to have done anything ameliorative about it. I like to think he put in a good word for Cuba's noble political prisoners, but who knows?

Likewise, his concern for the world's poor conflicts with his concern for the environment. If we were to go along with the trendy environmentalists' standards against carbon emissions, poverty would cease to be declining and would actually increase. As it is now, poverty has been declining throughout much of the world. The use of fossil-based fuels along with other chemicals and the adoption of capitalism explain the reason that abject poverty has declined by more than 50 percent over the past three decades across the globe. People are living better, longer and more promising lives because of capitalism and globalism worldwide than ever before. That is the unsung song of the early part of the 21st century.

I share the pope's concern for the environment, though I take leave of his characterization of planet Earth as "an immense pile of filth." Did the pope filch a line from the American left? The United States of America is making steady progress on the environment. Our country is ahead of itself in practically every environmental standard. It is time for the world to catch up with us.

Otherwise, I found the pope's visit all to the good. He goes easy on some matters that earlier popes have been steadfast on. Well, that is the prerogative of the Vicar of Christ on Earth. Let us see how he does with his modern style.